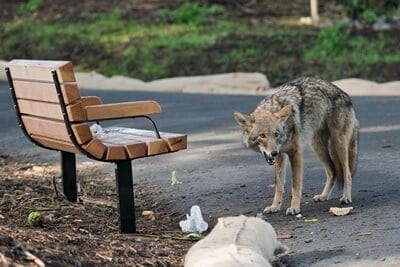 Of all predators of the cat, coyotes are among the most feared. Coyotes are found in 49 states throughout the country, with only Hawaii considered safe. These wild prairie dogs make short work of domesticated cats.

Protect cats from coyotes by keeping them indoors at night. While not strictly nocturnal, you’ll rarely see coyotes by day. Indoor cats are safe as coyotes cannot fit through a cat flap. If your cat roams your yard at night, build a shelter and provide access to higher ground. Coyotes can leap to impressive heights but do not climb surfaces.

Naturally, it’s also advisable to keep coyotes away from your property. In addition to tall fences, coyotes dislike bright lights and noise. They are also afraid of humans. Work with your neighbors to make your home a coyote-free zone.

While coyotes are canines and cats are felines, these two animals have plenty in common. Both are natural hunters that stalk smaller prey. Both frequent urban and country territory alike. They prefer to hunt and patrol the streets under the cover of darkness.

Alas, there is one significant difference. Coyotes attack cats, whereas a cat will not dare attack a coyote. Coyotes are a significant threat to domestic felines.

Coyotes are found all over the United States, from quiet rural locations to bustling city centers. Cats are instinctively afraid of these animals and will avoid them. As explained by the Journal of Mammalogy, stray and feral cats are rarely spotted in coyote country.

Aversion and avoidance only go so far, though. Owners need to work to keep their cats free from wild predators, especially coyotes. Failing to take the threat of these animals seriously could have tragic consequences.

How Often Do Coyotes Kill Cats?

Coyotes will not always kill cats on sight. Coyotes are opportunistic hunters and prefer to stalk smaller prey. If rabbits are rodents are in the area, coyotes will gravitate to such wildlife. Cats remain at risk, as are other, larger animals.

The Journal of Wildlife Management attached collars to 8 wild coyotes over 4 months. During this time, the coyotes in question encountered cats on 36 separate occasions. 19 (or 52.7%) of these interactions ended fatally for the cats in question.

Those odds are not favorable for any feline. It is unclear how the remaining 17 cats survived the experience. The study does not discuss if conflict still arose and the cat came out on top or if the coyote resisted the urge to pick a fight.

How Do Coyotes Catch Cats?

The coyote hunting style is comparable to that of a cat. Coyotes like to seek food alone unless stalking larger prey such as deer. The coyote will watch the cat from a safe distance, remaining undetected for as long as possible, then pounce upon a victim.

Most coyotes will weigh around twice as much as a housecat, sometimes even more. As a result, a coyote can easily overpower a feline. This means a coyote can pin a cat to the ground without difficulty.

The claws of a coyote are sharper and deadlier than those of domesticated dogs. Wounds inflicted by claws immobilize a cat and prevent it from escaping.  The teeth of a coyote are comparatively blunt, but the jaws are mighty.

The mouth, too, can be used to pin a cat to the ground. Once a coyote has a cat at its mercy, it will typically complete a kill on the spot. The coyote will then drag its prey away to a den.

Food is the most common explanation for coyotes to attack cats. In theory, coyotes only need around 4 lbs. of food per day. Therefore, they prefer to hunt smaller game. A cat is a hearty meal for any coyote.

All the same, coyotes are opportunistic hunters. If other food sources are rare, they will not hesitate to eat a feline. A coyote may welcome the opportunity to gorge on a cat. After doing so, the coyote will not need to eat again for some time.

Do Coyotes Kill Cats and Not Eat Them?

Coyotes do not kill for sport. Despite their feared reputation and ferocity, coyotes are nervous and cowardly by nature. A coyote will rarely consider attacking a cat if not hungry.

There are exceptions to every rule. One reason for a coyote to attack a cat outside of hunger is the protection of their young. Coyote breeding season is between February and March. Males become particularly aggressive at this time.

Most coyote pups are born between May and August. These young coyotes are blind and entirely reliant on their mother. If a curious cat encounters a den, a coyote may attack on sight. The adult coyote will tolerate no potential threat to her babies.

While the mother is guarding her pups, the male will patrol for food. If a coyote kills a cat without eating, it will likely drag the corpse to a den. Providing a meal ensures that a mother and her young can eat without the need to hunt.

Can a Cat Survive a Coyote Attack?

Cats are scrappy fighters, so a coyote encounter is not necessarily an immediate death sentence. Unfortunately, if you were to place bets on the outcome of a conflict, you’d get long odds on a cat emerging victorious.

Never overlook the size advantage that coyotes have over cats. The razor-sharp claws of a coyote are also dangerous. Perhaps most of all, coyotes have a greater killer instinct than domestic felines. Pet cats hunt for recreation; coyotes kill to survive.

Even if the cat is not fatally wounded, coyote encounters carry potential longer-term repercussions. As per EcoHealth, coyotes sometimes eat from trash cans or compost. Such a diet leads to many outbreaks of disease among these animals. Some may even be rabid.

Can a Cat Fight Off a Coyote?

One-on-one, a cat stands a slim chance of fighting off a coyote. Feral cats are likeliest to enjoy success. These animals are used to fighting for their lives. They will have more experience in taking on larger predators.

One physical advantage that cats do have is their claws. Feline claws are even sharper than those of a coyote. If the cat flips onto its back, it can attack with all claws at once. If scratched on the nose or eye, a coyote will often flee.

Unfortunately, such a coyote may call for reinforcements. While coyotes hunt alone, the distinctive howl of these animals will attract others. A brave cat may find itself outnumbered. It’s best to avoid placing a feline at such risk.

Can a Cat Outrun a Coyote?

A cat is likeliest to outfight a coyote if it faces the predator head-on. Running is often the worst thing a cat can do. Fleeing triggers hunting instinct in a coyote. These wild canines will not give up until the cat is within its clutches.

What’s more, even the sprightliest cat will struggle to beat a coyote in a race. These predators are born sprinters. While a cat will likely retain pace for longer, the coyote will have an immediate advantage. Some coyotes can reach speeds of 40 mph.

Senior cats have no chance of outrunning a coyote. Many older felines struggle with arthritic joints and lose speed of movement. If your cat has reached double figures, keep it far away from any threat of coyotes.

Can a Cat Escape a Coyote?

Cats cannot outrun a coyote. To attempt this is doomed to failure. The best way for cats to evade coyotes is to climb to an elevated surface. Coyotes can leap to impressive heights – over 6 feet in some cases – but do not climb.

If a cat scurries up a tree, it will typically be safe from the attention of a coyote. The cat may struggle to get down again, but you can help with this in daylight. When the sun comes up, most coyotes will slink off. Equally, once the cat is out of reach, the coyote will likely lose interest.

How to Keep Cats Safe from Coyotes

The ever-present threat of coyotes needs to be managed by owners. If you know that coyotes patrol your area, do not take any chances. Work to keep your cats safe from these canine predators. There are three core ways to achieve coyote protection for cats.

It’s always advisable to keep coyotes off your property. If you have cats, this is especially important. Once one coyote finds its way to your land, others are likely to follow.

Work with your neighbors to make your street a coyote-free zone. Coyotes rarely attack people, but they can still be a nuisance. Thankfully, coyotes are afraid of humans. Shouting and waving your arms will often scare coyotes away permanently. Other approaches you can take to keeping coyotes off your property include:

There is no certainty that these steps will be 100% effective in keeping coyotes off your property. Such deterrents will drastically reduce the comfort that your land offers the predators, though. As a result, most coyotes will seek food elsewhere.

If you keep your cat indoors at night, it will not encounter a coyote. Sometimes, the simplest solution is the best. Train a cat with insatiable wanderlust to sleep through the night and thus stay home.

Start playing with your cat and feeding it as late as possible. Ideally, schedule these activities for around an hour before bed. Once the cat has played and eaten, it will be exhausted.

Most cats will groom themselves and fall into a deep sleep after an evening meal. The cat is unlikely to surface again until morning. By this time, the coast will be clear outside. Your cat will be free to roam in comparative safety.

If you want to let your cat outside at night, consider building a coyote shelter. This refuge will give the cat somewhere to run and hide. To create the ideal coyote-proof sanctuary, follow these steps:

Be aware that this shelter will not offer a permanent fix. A determined coyote can likely chew through wire, or even wood, eventually. A cat is unlikely to let this happen silently, though. Frightened cats will yowl, howl and cry. The noise will be impossible to ignore.

If you hear such a commotion, turn on all outdoor lights and grab a flashlight. Check on your cat and, if you see a coyote, shine the light into its eyes, clap your hands, stamp your feet, and shout.

Yes, this will likely wake and annoy your neighbors. Your cat probably already did this, though. More importantly, it is much better to save your cat and apologize afterward than to leave a pet at the mercy of a coyote.

Cats and coyotes are natural enemies and should not be permitted to mix. If you know that coyotes live in your area, protect your cat. While felines can hold their own against most foes, coyotes are particularly dangerous.