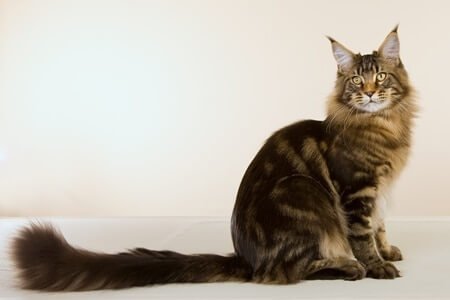 The length of a cat’s tail is mainly dependent on its breed. Of course, there are other considerations, such as genetics, most notably the cat’s size.

While a tail may be a communication tool, it’s largely used for maintaining balance. If a cat shifts its weight to one side, you’ll notice its tail flicking to the other side. Likewise, if a cat falls, it will use this technique to land on its feet. By whipping its tail, it can shift its weight until it’s re-centered. With its feet facing down, it can land correctly.

Why Do Cats Have Long Tails?

If your cat has a longer tail, you may assume that it’s a more capable animal. While there are certain advantages to a long tail, this isn’t always the case. For example, the Manx breed is known for having stubby tails. Despite this, a Manx is still as well-balanced as other cats.

What Is The Average Cat Tail Length?

If you entered your cat into a competition, it would be assessed based on its overall proportions. For example, an American curl needs to have a tail that’s half its body length. Of course, not all cats are bred for show. Most cats have a tail that is as long as their body.

Cats are rarely purebreds. This further complicates the definition of a correct tail length for each breed. Cats may have genes that create kinked, curled, or bobbed tails. So, predicting tail length is almost impossible.

What Cat Has The Longest Tail Ever?

According to the Guinness World Records, the longest tail on a domestic cat ever recorded is 17.58 inches. This record belongs to a silver Maine Coon called Cygnus Regulus Powers.

You’d imagine that a longer tail would mean better balance, but that’s not the case. In fact, Cygnus’ owners reported a lot of tail-related mishaps. Most of these had to do with Cygnus’ tail dipping into things accidentally.

The breed of a cat isn’t always the main influencer of tail length. For example, getting a Maine Coon kitten doesn’t guarantee a very long tail. However, the breed does play a significant role. As mentioned, the average tail length of a cat is largely influenced by its bloodline.

The American Shorthair’s tail is thick at the base, tapering off towards the end. Like most breeds, the tail is proportional to its overall body size. Because its size is larger than most breeds, its tail length tends to be longer.

The Balinese is known for its regal, graceful looks. Its coat looks more refined than other long-haired breeds, and it lacks a fluffy undercoat.

This coat is soft, silky, and medium in length. Its elegance is also heightened by the Balinese’s build, with strong and defined muscles. This is contrasted by its long, slender body and fine bone structure.

The fancy qualities of its coat and build extend even to its tail. This breed’s tail is often extremely long, with a large plume of fur at the end. This plume, along with the cat’s belly, ears, and paws, is darker than the rest of its body.

The Chartreux has a dark, elegant coloration. These cats are grey-blue in color, ranging from dark to lighter shades. The eyes vary between orange and gold. Because of its elegant looks, the weight of this cat may be surprising. The Chartreux is hefty at 6 to 9 lbs. for females and 10 to 14 lbs. for males.

The Chartreux is known to be an excellent hunter and traveling companion. These cats are most beloved for their stealth and quietness. Most Chartreux rarely meow and will instead purr and chirp. Lightning-fast reflexes also help them out in the field. Here, the cats’ trusted tails improve their balance and agility.

Cornish Rex has an extroverted personality. They are loud cats that are affectionate, intelligent, and always ready to play. The Cornish Rex loves to be handled and made the center of attention.

The Cornish Rex has a sleek and slender build. It has a long torso and slender legs. To keep this aerodynamic design, its back is arched and its belly curved.

The Egyptian Mau is easily identified by the spots in their coat, which appear in the tips of their fur. Aside from these spots, the Mau also has rings on its tail. These rings increase in width until the tip is completely black.

Known to be the fastest domestic cat breed, the Egyptian Mau’s patterned tail is essential for speed and agility. The Mau is a compact, muscular cat with a medium-length body. What this breed lacks in sleekness, it makes up for in grace. The Mau’s powerful muscles, paired with its long tail, allow it to move and turn quickly.

On top of fast reflexes, this breed’s legs are also designed for speed. The Mau’s hind legs are longer than its front legs. A flap of skin is found between its flank and back knees, letting it stretch its legs much faster to run at greater speeds. This breed has reached speeds of more than 30 mph.

The Mau’s tail means that it’s known for another interesting quirk: a ‘wiggle tail.’ This is where the Mau wiggles and twitches its tail to signify happiness. This behavior comes with what appears to be spraying behavior, although the Mau does not release urine while doing so. While resting, the Mau’s tail will lazily swish back and forth.

This breed holds the record for longest cat tail. Aside from that, the Maine Coon is also known for its large body and gentle personality.

The Maine Coon has a distinctive ruff along its chest, with a rectangular body shape and a strong bone structure. The Maine Coon has a two-layered coat, made to look even thicker because of its unevenness. It also has long-guard hairs with a silky undercoat. All of this allows the Maine Coon to survive in frigid environments.

This adaptation extends to the Maine Coon’s tail. Like its coat, its tail also appears thick due to the bushiness of its fur. Its tail is very long, designed to offer protection in cold climates. In freezing weather, the Maine Coon can wrap its tail around its face and shoulders. This reduces the amount of body heat lost and shields the cat from cold air and snow.

The first Nebelungs were named Brunhilde and Siegfried, a queen and warrior in the Germanic saga, Nibelungen-Lied. The name of the breed comes from this saga, combined with the German word ‘Nebel,’ which means ‘mist.’ Exuding an air of mystery at first glance, the name Nebelung is apt for this enigmatic-looking breed.

The Nebelung is a relatively new breed dating back to the 1980s. For this reason, there are few of them. Wherever the Nebelung exists, it continues to captivate owners’ attention with its tail length and fascinating coloration.

The Scottish Fold takes its name from a mutation that affects its ears. Scottish Folds have ears that fold forward. This results in the breed having a round-faced, even owl-like appearance.

This roundness continues with the rest of the Fold’s body. Its entire frame has a gentle curve with a rounded, padded look and short legs. Most notably, the Scottish Fold’s tail is round, too. This makes the Scottish fold look soft, friendly, and approachable.

At rest, the Fold is known to have a soft voice with unique vocalizations. These cats often sit in what is called the ‘Buddha position.’ This is when the Fold lies down, its belly flat, with legs and paws stretched out. Because of its stubby legs and round body, this position may be more comfortable than other cat positions.

Unfortunately, the Fold is susceptible to degenerative joint disease, which affects the tail, ankles, and knees. This is characterized by fusing the affected areas, which leads to lameness, misshapen limbs, and a reluctance to move. This disease is believed to be linked to the same mutation that causes the fold in this breed’s ears.

For cat shows, it’s more important for the tail to be proportionate with the rest of the body. For the average owner, a short or long tail is just a matter of aesthetic preference.