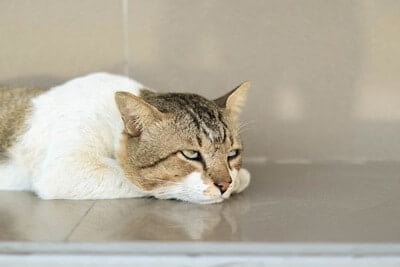 Lethargy is a common symptom of many feline illnesses. While senior cats will naturally want to rest for longer than a young adult cat, the sleeping position assumed could be a sign of sickness.

Curling in a ball or adopting the fetal position suggests that a cat is struggling to stay warm. A cat on its side may be finding it hard to breathe or relieving pressure on its aching joints. Sleeping on its back implies vulnerability, as the cat wants quick access to its claws for self-defense.

It is hard to diagnose illness by sleeping position alone. Cats sleep in various poses, many of which look pained and uncomfortable. Accompanied by the physical symptoms of illness, a cat’s sleeping position can help reveal what ails it.

Neuroscience & Biobehavioral Reviews stated that lethargy and depression are the most common warning signs of sickness. If a cat is withdrawn and sleeping more, it could be hiding pain or illness.

Watch your cat during sleep as the position your cat adopts can reveal the source of discomfort. Sleeping positions are a useful barometer of health when considered with other symptoms.

The table below details common sleeping positions in sick cats and what they may mean:

Also, check for other changes in your cat’s sleeping routine. If your cat always slept alone but now looks for company, it may be feeling unwell, so the cat is seeking comfort and protection while it rests.

A sick cat may also sleep with one or both eyes open, implying that it feels vulnerable. It’s unwilling to fall into a deep sleep in case it needs to react quickly to changing circumstances.

Cat Sleeping in a Ball

A cat curled up in a ball is common during the colder months, as this position is how a cat remains warm.

As Science explains, cats lose heat through their eats and footpads during sleep, and this position protects these extremities.

If you find your cat in this position, check the ambient temperature. Cats need a room temperature of around 70 degrees Fahrenheit to remain comfortable. If necessary, apply more heat sources to a cat’s bed.

If a cat’s body temperature drops below 100 degrees Fahrenheit, it’s at risk of hypothermia. Don’t check a cat’s temperature while it sleeps.

Illnesses that lead to low body temperature in cats include:

These symptoms vary from moderate to severe. Warm your cat up as cats can’t sustain a body temperature below 100 degrees Fahrenheit for long. Left untreated, this can lead to hypothermia.

Cats will rarely reveal that they’re in physical discomfort. Unlike other animals, cats hide in dark places to avoid detection. In the mind of a cat, pain is a sign of weakness.

This resting position is a means of relief. If your cat is sleeping curled in a tight ball and displays any of these physical traits, it’s in pain:

Cats don’t just purr for pleasure; it’s also a way to self-soothe when in pain.

A cat in discomfort will often curl up in a box or similar enclosed space as it wants to be left alone until the pain passes. Cats feel more secure when enclosed in small, tight spaces.

This pose helps a cat to retain body heat. Check the temperature of the cat and its surroundings while it’s awake.

If the cat has a safe temperature, consider whether it could be injured. The purpose of the fetal position may be to protect parts of the anatomy, as a cat cannot be touched on the paws or belly in the fetal position.

When your cat wakes up, check how well it moves. If the cat refuses to allow you to touch its paws, injury or discomfort is possible. This could be something minor, such as dry and cracked paw pads.

If you find no obvious physical problem, it could be feeling vulnerable due to an illness. The fetal position leaves a cat confident that it won’t be disturbed as all delicate anatomy is protected.

A cat will rarely choose to lie on its stomach when planning a deep sleep. However, an unwell cat may be reluctant or unable to sleep properly.

There are two positions a cat adopts on its stomach:

When a cat tucks its paws and tail under its belly, it is called “the loaf.” Stretching the paws and legs out can be more concerning.

A cat in the loaf position is usually planning a brief nap, tucking its paws and tail to keep warm. It’ll keep its head upright to remain alert. If sleep claims the cat, the head will eventually drop, which is referred to as a “collapsed loaf.”

Sick cats rarely adopt the loaf position. If the cat has concerns about body temperature, it’ll curl up for warmth. If it’s a pain, it’ll avoid remaining so conspicuous.

One exception is if a sick cat is worried about falling asleep in case it doesn’t wake up. Equally, it wants to remain alert in case a rival has noticed its illness and plans to take its territory.

In such instances, the cat will adopt the loaf position. The cat is hoping to get enough rest through a series of micro-naps, negating the need for genuine sleep.

A cat will not get enough rest using this sleeping position alone. Experimental Neurology explains how sleep deprivation leaves cats at risk of seizures.

A cat may lie on its stomach with its paws outstretched, resembling the flying position.

If the cat’s paws are divided, it’s just ensuring that it can move quickly. As the paws aren’t tucked, it can quickly escape if threatened. This may suggest that it feels vulnerable due to sickness or briefly regaining energy before launching a hunt.

It’s claimed that some cats lie on their stomachs with paws together to open the lungs, implying that the cat may have a breathing issue.

Cat Sleeping Flat on Back

Leaving paw pads and belly exposed doesn’t come naturally to cats, suggesting that your cat trusts you and feels secure.

However, this isn’t always the case. Cats roll onto their back when feeling threatened or vulnerable, as this provides access to all four claws and their teeth.

If your cat is affectionate during the day and sleeps on its back, it’s not a concern as the cat is demonstrating its trust in you.

If the cat is acting off in other ways, be mindful of this sleeping position. The main warning signs are uncharacteristic aggression and prolonged periods of hiding, suggesting that the cat feels the need to be on high alert at all times.

This vulnerability may be due to illness or pain, such as arthritis. A cat’s legs will be in the air if sleeping on its back. While not ideal, this is preferable to placing weight on the joints.

Cat Sleeping Flat on Side

Taken alone, side-sleeping doesn’t mean a cat is sick, but it usually suggests it’s happy and relaxed. Despite this, sick cats will often lie on their side.

Many cats won’t sleep in this position if sick because sleeping on the side leaves a cat exposed. As established, unwell cats feel vulnerable, so they’ll avoid a defenseless pose.

Look out for the following behaviors while your cat is awake:

These symptoms suggest that your cat has arthritis, breathing difficulties, or both. In such instances, the cat will sleep on its side to open the lungs and keep the joints free of pressure.

Cat Sleeping with Another Cat

Cats often sleep alone, even if they share a home, due to the territorial nature of cats. A bed, or favored hiding spot, will be claimed by a rival feline.

Exceptions may include siblings or cats that grew up together. These cats will forge a bond that isn’t broken in adulthood. Co-sleeping is relatively common, though.

If your cat starts sleeping with a fellow cat, check its behavior while awake. Co-sleeping suggests that the cat is unwell and wants another cat to watch over it while dozing.

A cat will only do this if very unwell as it understands that it’ll relinquish all dominant status by asking another cat for assistance. In most instances, the cat would prefer to sleep with its owner.

Even felines that appear to fight all day may sleep together for the common good.

Cats appearing to sleep with one eye open is common, but it’s genuinely sleeping. Cats have a transparent third eyelid (nictating membrane) that closes.

The purpose of this is so a cat can stay alert as its peripheral vision will still identify threats. Equally, the cat can react faster upon waking up as it wasn’t in a deep sleep and won’t be groggy.

Sick cats often sleep with their eyes open. For example, cats with urinary infections will want to make a rapid trip to the litter box. Cats that struggle for breath will be concerned about falling asleep too deeply.