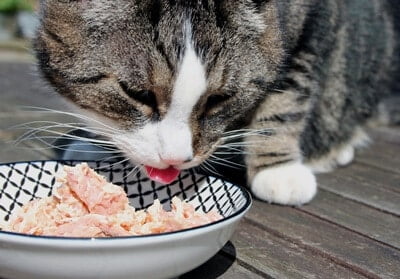 Cats love eating tuna fish. If you open a can of tuna, it won’t be long before your cat is drawn to the enticing aroma. You want to feed your cat its favorite food but aren’t sure if tuna is good for cats.

A cat shouldn’t be given tuna daily because it can cause mercury poisoning. Just 3 ounces (85 grams) of light tuna contains 10.71 mcg of mercury. Tuna is high in protein, omega-3 fatty acids, and B vitamins, but it lacks many nutrients that cats need to stay healthy. Cats shouldn’t be fed canned tuna in oil or brine.

Tuna can become addictive to cats due to its rich texture and strong aroma. There’s no harm in giving your cat tuna fish in spring water occasionally, but scientifically formulated tuna-based cat food is recommended.

Why Do Cats Love Tuna So Much?

You may find that some cats are disinterested in tuna, but they will usually be the exception to the rule. So, why do cats love tuna fish?

Unfortunately, foods that taste good are not always the healthiest for cats.

Is Tuna Fish Bad for Cats?

Here are the reasons why tuna is unhealthy for cats:

Is Tuna Good for Cats?

Here’s how tuna can be healthy for cats:

What Is the Best Kind of Tuna for Cats?

Some forms of tuna are safer for cats to eat than others. Here are the healthiest ways to feed your cat tuna:

Although raw food has some health benefits, you should not feed raw tuna to cats. Raw tuna contains thiaminase, which is an enzyme that destroys thiamine (vitamin B1.)

The canning/cooking process destroys thiaminase, so canned and cooked tuna is less likely to lead to a vitamin B1 deficiency than raw tuna.

If you feed your cat canned tuna, make sure it’s in spring water rather than brine (saltwater) or sunflower oil.

The sodium in brine can cause dehydration, and excessive sunflower or olive oil consumption can cause diarrhea.

Due to water pollution, all fish and shellfish contain some mercury. However, large and long-living fish, such as albacore or bluefin tuna, contain higher levels of mercury than smaller fish.

Farmed tuna contains lower levels of mercury than wild-caught fish. You can opt for a lower-level mercury product, but choose chunk light tuna. This is made from smaller tuna fish, such as Skipjack and Tongol.

These fish live in shallower waters and will have consumed less prey during their lifetime, so the mercury concentrations in their bodies will be significantly lower.

If you’re concerned about the health risks of canned tuna, it’s recommended that you get some tuna-flavored cat food.

Canned tuna is not a balanced meal because it contains low levels of taurine. Instead, choose a complete, nutritionally balanced cat food that has tuna on the ingredients list.

How to Maximize the Nutritional Benefits of Tuna

The safest way to feed your cat tuna is through a complete cat food that contains tuna. That way, your cat will benefit from the high levels of docosahexaenoic acid (DHA) in tuna but will still be eating a nutritionally balanced meal.

Moreover, tuna-flavored cat food still smells and tastes like tuna, so it’s ideal for cats that crave tuna or cats with a poor appetite.

Due to technological advancements, the most beneficial component of tuna (docosahexaenoic acid) can now be found in other foods.

How to Feed your Cat Tinned Tuna Safely

The occasional serving of tinned tuna is unlikely to cause any harm to your cat, as long as you remember the following:

It’s Not a Meal Replacement

Canned tuna is not a meal replacement because it’s not nutritionally balanced. It’s OK to treat your cat with a few chunks of canned tuna, but this should be in addition to its regular meals.

It’s OK to treat your cat with tasty foods, like tuna. But make sure that you’re giving it alternative treats, too. This should stop your cat from becoming obsessed with eating tuna.

Try feeding your cat specially-formulated cat treats or treating it in other ways. For example, try petting or playing with your cat when it uses its manipulative skills to beg for extra food.

Use Tuna to Entice your Cat

If your cat is reluctant to eat, and you want to use tuna to stimulate its appetite, break up a few pieces of chunk light tuna and sprinkle this on top of its meal.

Canned tuna can be really useful for helping stressed or senior cats to regain their appetites.

Do not give your cat canned tuna more than once a week, and keep portion sizes small.

Not Suitable for all Cats

If your cat has a chronic health condition, such as kidney disease, you should not feed it canned tuna. However, it’s unlikely that the occasional portion would cause any health problems.

Is My Cat Eating Too Much Tuna?

We are all guilty of overfeeding our cats or giving them too many treats. It isn’t easy to say no to a cat when it’s begging for its favorite fish-based food.

But how do you know if your cat is eating too much tuna? According to Taylor and Francis, these symptoms can be caused by a tuna-rich diet:

These symptoms can be due to other factors besides overeating canned tuna. Nevertheless, if you suspect you are feeding your cat too much tuna, you should reduce the amount.

Due to the risks, there are scenarios in which cats should never be fed tuna. These are as follows:

Although cats with kidney disease benefit from quality, digestible protein, canned tuna is unsuitable because it is high in phosphorous.

A diet that is high in phosphorous will speed up the development of kidney disease. Renal cat food often contains rabbit meat because it is naturally low in phosphorous.

A cat with heart disease is fed a low sodium and high taurine diet. Canned tuna is high in sodium and low in taurine, so it is unsuitable.

Tuna in brine is unsuitable for cats with diabetes because it will cause dehydration. Here’s how to get your cat to drink more water.

Tuna allergy symptoms include intense scratching, flatulence, hyperactivity, and vomiting. Allergies are hard to diagnose if a cat eats a mix of foods.

If you have noticed any digestive issues in your cat, it’s possible that the occasional piece of tuna is to blame. If you suspect a food allergy, start eliminating foods one by one to determine which one is to blame.

Mercury Poisoning from Tuna in Cats

In this report on Science Direct, experimenters tested the mercury levels in 101 pet foods, and here’s what they found:

Vets do not commonly see Mercury toxicity, but that doesn’t mean that minor, gradual damage isn’t being caused by moderate levels of mercury in cats’ diets.

Over time, cats can develop an unhealthy addiction to tuna. Some cats may become extremely fussy about food and refuse to eat anything besides tuna.

Other cats may become aggressive if they don’t get their tuna fix. Here’s how to handle a cat that’s addicted to tuna:

Introduce cat foods with other flavors. Rabbit is fairly strong-tasting and low in phosphorous, so it’s a healthy alternative to tuna fish for cats.

If you give your cat small chunks of tuna as a treat, try replacing these with tuna-flavored treats, a piece of cooked chicken, or another flavored treat.

Start treating your cat in other ways. For example, when it’s looking around for something to nibble on, provide some attention (petting or play.) Remove all sources of tuna until your cat is eating other foods.