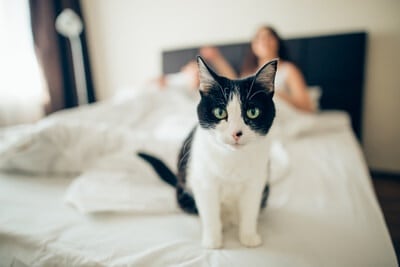 Cats are astute, attentive animals that pay more attention to human interaction than we realize. This means that they’re deeply impacted by the behavior of their owners and the atmosphere in a home.

Cats find arguments stressful as they hate hostility and loud noises, such as raised voices, items smashing, and doors slamming. Cats don’t understand what you’re saying and may think that the anger is directed at them. Most cats hide or go outside, but some will aggressively defend themselves.

Arguments between two people aren’t always avoidable, but you can spare your cat from being a part of your disputes. Cats relish a calm environment, so do what you can to provide tranquility in your home, if only for your cat’s wellbeing. Let your cat wander outside while you work out your disagreement(s).

Table of Contents show
1 Do Cats Know When Humans are Fighting?
2 Can Cats Sense Arguments Before They Happen?
3 How Do Cats React to Humans Arguing?
3.1 Hiding
3.2 Leaving the House
3.3 Meowing
3.4 Destructive Behaviors
4 Why Does Arguing Stress Out My Cat?
4.1 Concern About Behavior
4.2 Loud Noises
4.3 Loss of Routine
5 How To Soothe A Cat After an Argument

Do Cats Know When Humans are Fighting?

According to Family Process, cats are considered part of the family when brought into a home. While it means cats are much-loved pets, they’re not always shielded from the reality of human interaction.

The fact is that humans fight on occasion. Disputes arise in a marriage, house-sharing arrangements, or between siblings or parents and children. This will not go unnoticed by cats, who will invariably react adversely to any conflict that’s going on around them.

Cats like a peaceful and relaxed environment. If two people argue, that sense of serenity and routine is shattered, resulting in feelings of stress and anxiety.

Can Cats Sense Arguments Before They Happen?

You may find that a cat starts demonstrating signs of anxiety before an argument with your partner reaches boiling point. It’s easy to assume that your cat has prescient powers of clairvoyance in such an instance, but the reality is more mundane.

The journal Animals explains how cats can understand and decipher facial expressions in their owners. So, if you’re scowling or grinding your teeth, your cat will likely start to worry about what will happen next.

If disputes and arguments in your home are common, your cat will learn the warning signs of the calm before the storm. As creatures of routine, cats memorize everything that could be considered important, both good and bad.

If your cat senses an argument is about to flair, it may seek to leave the house.

How Do Cats React to Humans Arguing?

When a cat’s owners fall out and argue, it’ll invariably result in stress for the cat.

Consequently, it’ll likely react in one or more of the following ways:

Your cat must have territory somewhere in the home it can flee to. Ideally, this will be a spare room, but at the very least, it needs to be the top of a closet or under a bed.

Your cat will remain in hiding throughout the argument and likely for some time afterward. Don’t force your cat out of hiding, and never don’t move the dispute to this area.

Allow your cat to hide and wait out what it finds so frightening.

If your cat cannot find somewhere it feels safe within the house, it may look to go outside. Outdoor cats memorize routes to countless other locales where they’ll find food, water, shelter, or solitude.

Consider letting your cat out if you believe that an argument is pending, as there’s no reason to expose a cat to fighting. Let the cat roam for a while and return when the home is calmer and more settled.

Many couples find that their cat meows when they argue. This is because the cat is picking up on the raised voices and tension. In all of this noise, the cat wants to have a say.

Listen to the meow, though, as it’s unlikely to be noise for noise’s sake. The cat may begin with a soft, plaintive meow, asking, “what is happening – should I be worried?” Over time, this can rise in volume and intensity to denote genuine panic.

Your cat may be meowing to distract you from the argument. By turning your attention to your cat, you will cease the dispute, at least temporarily.

If your cat cannot distract you through verbalization, it may resort to destructive behaviors.

This could include pushing a glass off a table, scratching or damaging furniture, or even urinating or defecating in the house.

As difficult as it may be, don’t react negatively to this action. Just calmly clean up the mess.

Why Does Arguing Stress Out My Cat?

Conflict is a regular source of stress for both the humans involved in the argument and those around them, and cats are no exception.

In fact, in many respects, a cat is more impacted by humans arguing. They don’t understand your words, just that you’re upset and annoyed.

Your cat will worry about whether it’s in trouble. When the cat hears raised voices, it’ll wonder if it was responsible. With this in mind, be careful about how and when an argument arises.

If you shout at your partner while your cat is on the litter tray, your cat may misunderstand this as a source of displeasure. This can leave a cat afraid to use its litter box, creating a new set of problems.

Loud noises are a constant source of stress for cats.

Fireworks are the most common example of this, as explained by the New Zealand Veterinary Journal, but any sudden excessive noise can make a cat jump out of its skin.

When humans argue, loud noises are inevitable. Even if you do your best to seethe silently, the dispute will certainly involve raised voices, possibly coupled with the slamming of doors.

Ignore claims that cats are incapable of forming strong bonds with their owners. If your cat didn’t harbor affection for you and enjoy your company, it wouldn’t remain living in your home.

One of the main reasons your cat feels so strongly about you is the robust and secure protection you provide. It knows that you will meet its needs, such as providing food, shelter, and play when needed.

While you argue with another person, you’re not focused on the cat’s needs. That can be quite frightening and stressful for a feline. It only takes one missed meal for the cat to fear that it has been forgotten or that you’re now too busy to care for it.

How To Soothe A Cat After an Argument

It’s usually easy to understand when humans have concluded an argument.

The air will be cleared, and the tension will be relieved in how we communicate and interact. It may not be as easy for animals to understand this, and you may still need to soothe your cat.

The first step is to give our cat space. Don’t actively fetch it down and try to force it into calming down. You’ll just further aggravate your cat’s anxiety in this instance. Go about your business as usual, as though nothing ever happened.

When you’re relaxing later, your cat may cautiously approach to see if things have settled down. Ensure that everybody involved in the argument is present and takes a turn to provide the cat with attention.

Your cat may still be cautious for a few hours, or even days. Don’t be surprised if your cat keeps its distance from one half of the arguing party, too, as most felines have a favorite person and won’t take kindly to somebody yelling at them.

If you bring a cat into your home, it’s not unlike having a child. You’ll need to be careful about how you behave in the cat’s presence, being wary not to upset its sensitive nature. Avoid arguments wherever possible, and when they arise, do whatever you can to avoid involving your cat in the conflict.