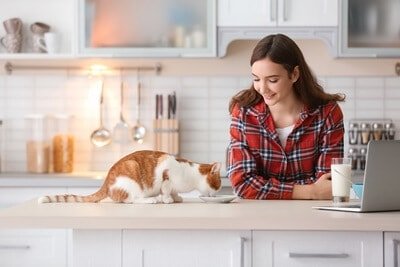 Cats have a reputation for being aloof, using their owners for food. While this isn’t always the case, independent cats are less likely to form an attachment to their owners, only coming home to eat and sleep. However, this doesn’t mean your cat doesn’t love you.

Some cats use their owners for food, but that’s not the case with all of them. Humans provide protection and affection that some animals crave. Many cats bond with their owners, so their connection goes deeper than food. However, if your cat has a medical issue, nutritional deficiency, or a condition such as pica or psychogenic abnormal feeding behavior, it’s more likely to become obsessed with food.

Cats that are bored, depressed, or lonely are also at risk of developing an obsession with food, as they use it as a way to soothe themselves. Providing more mental stimulation, feeding high-quality food, or making your cat’s environment as comfortable as possible can help improve your cat’s relationship with food.

Table of Contents show
1 Does My Cat Love Me or Just Want Food?
1.1 Protection
1.2 Affection
1.3 Bonding
2 Why Does My Cat Only Care About Food?
2.1 Medical Condition
2.2 Food Obsession
2.3 Nutritional Deficiencies
2.4 Boredom or Depression
2.5 Pica
2.6 Psychogenic Abnormal Feeding Behavior
3 My Cat Only Purrs for Food
4 My Cat Only Comes Home To Eat
5 How To Know If Your Cat Loves You
5.1 Slow Blink
5.2 Sleeping With You
5.3 Grooming
5.4 Kneading
5.5 Biting
5.6 Purring
5.7 Offering Gifts

Does My Cat Love Me or Just Want Food?

If you own a cat, it can seem like your cat’s only using you for food. This is true of cats that aren’t bonded with their owners but far less likely with pet cats who enjoy spending time with humans.

The ancient bond between cats and humans started with food. Researchers studied the bones of 5,300-year-old cats from China and found that they lived in grain stores. Humans fed the cats while taking care of rodents and other pests, which is when domestication first began.

The good news is that cats prefer the company of their owners to food. The journal Behavioral Processes discovered that out of human interaction, food, toys, and a scented cloth, cats preferred human interaction the most. This wasn’t only true for pet cats but shelter felines, too.

Living with humans provides cats with protection from predators and shelter from the elements. While cats are hard-wired to live outside, it’s not an easy life. Cats enjoy having a warm, safe environment to live in, as it allows them to conserve their energy ready for an evening of hunting.

Despite common misconceptions that cats are aloof, most enjoy being cuddled and petted. Not only does it feel pleasant, but it improves the bond between you both, enabling cats to build trust.

Cats enjoy being scratched along their back, under their chin, and around their ears. However, they don’t like being touched on their paws, bellies, or whiskers, as they’re sensitive.

A study published by Current Biology discovered that cats display distinctive attachment styles towards humans they know. Cats that developed a strong bond with their caregivers became less stressed as soon as they returned after a short absence. This suggests cats need to be around humans, and it’s not only because they want food.

Why Does My Cat Only Care About Food?

Cats have varying levels of social preferences. Some cats are more independent than others and prefer spending time on their own, coming back only for food and water. It’s possible to build a bond with your cat, but some cats will always remain aloof.

However, if your cat suddenly seems to care about nothing else or appears stressed and consistently hungry, one of the following reasons are likely to blame:

Several health conditions can be responsible for your cat’s increased appetite, including:

These conditions lead to hunger and also leave cats unable to satiate themselves. Each sickness manifests differently and causes different symptoms, but the most common include:

A health condition would explain why cats care more about their food than their owners. If you’re concerned, take your pet to the vet for a thorough check-over.

Some cats retain their wild instincts more than others, particularly if they’re rescued from the streets or haven’t been socialized from a young age.

Wild cats hunt several times a day, with the average 10-pound outdoor cat needing to eat around eight mice to sustain themselves. As a result, they have the mentality to eat small meals regularly throughout the day, fuelling their food obsession.

On the flip side, some cats consume excessive amounts of food once they realize they’ll only receive a couple of large meals a day. When dinnertime approaches, they’ll have a clear focus on food and food alone.

Low-quality cat food rarely contains the nutrients cats need to be healthy. The cheapest brands aren’t even made with enough real meat to satisfy cats. Cats that are deficient in essential vitamins and minerals eat obsessively to stop hunger. Unless you switch your pet to a more suitable type of food, the deficiencies will only worsen over time.

If your cat becomes fixated on its food, check the ingredients list of your chosen brand to determine how many nutrients it contains. It should have a high level of nutrients and few added ingredients. It must also contain vitamins.

Cats that are lonely or depressed use food as a way to self-soothe themselves, easing their heightened emotions. Cats are intelligent, curious creatures that require mental stimulation to stay physically and mentally healthy.

Stress triggers, such as loud noises and an unsuitable environment, can also fuel your cat’s desire to eat. You can easily rectify this by playing with your cat more frequently and offering more toys and games for them to play with when you’re not at home.

If your cat seems to only care about its food, don’t confuse a food obsession with pica. The symptoms are similar, but it’s an entirely different condition. Pica is an overwhelming compulsion cats have to eat non-edible food items, such as:

Your cat will grind these items with their back teeth before swallowing them, which creates a sense of reward. Common triggers of pica include:

Some cats, such as adopted feral felines or cats that live with several others, develop psychogenic abnormal feeding behavior, which is a type of food obsession. It’s not the most common cause of cats paying more attention to their food than their owners, but symptoms include:

According to the Journal of Veterinary Behavior, researchers studied an eight-month-old Siamese cat who had an obsession with food. Its condition improved with environmental enrichment and a daily routine for short, pleasant interactions.

My Cat Only Purrs for Food

Alongside meowing, purring is one of the most common sounds cats make. Many cats purr when it’s time for food. The purr sounds different from the other vocalizations because your cat’s perfected it to get food. Your cat will combine the purr with an unpleasant mew or cry, mimicking a human baby’s. That’s because humans, particularly mothers, are more likely to respond to this cry, providing the cat with the food it’s asking for.

However, purring has many different meanings. You may think your cat’s only purring for food, but it could be trying to tell you something. Paying attention to the sounds your cat makes can help you determine whether your cat’s hungry or being greedy or wants something else altogether. Cats also purr because they:

Double-check you’re feeding your cat enough food, and it’s not going hungry. If it is, you’ll notice an increased amount of purring.

My Cat Only Comes Home To Eat

Some cats are more independent than others and can’t shake their wild instincts, meaning they’ll stay outside for as long as they can. Improving your cat’s environment and removing stressful triggers can help keep your cat at home.

How To Know If Your Cat Loves You

You’ll know if your cat loves you because it’ll display several signs to show you. These include:

When cats blink or close their eyes in the presence of another cat or human, they’re showing trust and affection. Cats that slowly blink at their owners are aware you’re not a threat. You can return the gesture by slowly blinking back at your cat, which indicates you’re also comfortable around your pet.

Cats that feel bonded with their owners sleep with them. Some snooze on their laps, while others sleep on their pillows. This is all down to your cat’s personality.

Cats that do this are paying their owners a big compliment. That’s because they don’t like to feel vulnerable, especially when they sleep. This shows it trusts you not to hurt it and, as a result, exposes itself at its most defenseless.

If your cat sees you as a member of its family, it’ll lick and groom you in the same way as a kitten or another cat. Most cats lick human hair, but they also touch the skin. Grooming creates a social bond – the stronger it is between you, the more your cat will lick you.

While there are several theories about why cats knead, the most popular is that kittens do it to stimulate their mother’s milk flow. When cats transfer this behavior to their owners, they’re showing their trust, highlighting that they see you as part of their family.

Cats give love bites, which is a display of affection. The bite won’t hurt or leave marks, but it’ll feel gentle like your cat’s trying to hold your hand or finger in its mouth. If you offer your cat attention frequently, it’s likely to give you a love bite more often.

Love biting is also a way for cats to gain attention, particularly if you’re not providing your pet with enough. That’s why you should aim to spend plenty of time each day playing and interacting with your cat, being sure to give it cuddles.

Purring is an indication that your cat feels comfortable around you. While purring can be a sign of sickness or injury, you’ll be able to tell the difference because it’ll display signs of unhappiness.

Cats reserve purring for their favorite person. They don’t purr around other cats, only humans they’re bonded with. There are two main types of purring sounds in cats:

While it’s not always pleasant receiving dead animals as gifts, cats that present their kills class their owners as members of their family. Cats teach their kittens how to hunt, so they’re likely taking on the teacher role to show you how to catch your own food. Take this as a compliment – your cat feels comfortable around you.

It’s unlikely your cat’s only using you for food. While their instincts take over when they’re hungry, most domesticated cats enjoy being around their owners to some degree. Even though some cats are more independent and aloof than others, focus on interacting with your cat in a way it feels comfortable.

1 thought on “Does My Cat Only Want Me for Food?”