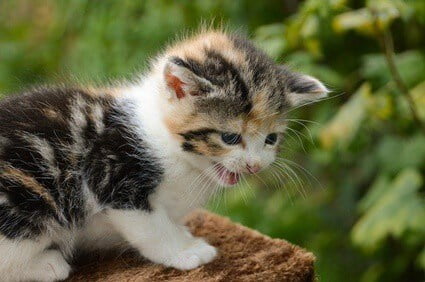 Cats meow to communicate with humans. They’re also highly intelligent animals. Felines have learned that they cannot communicate with us in the way they do with other cats, so they have developed a range of pleasing sounds to appeal to our caring, nurturing nature. This is why a cat’s meow is so often compared to a human baby’s cry.

Cats have learned to mimic a baby’s cry to some degree. By doing so, they appeal to a human’s maternal, nurturing instincts, making it far more likely that their needs will be met. This includes receiving food, warmth, care, and affection. A cat’s meow has a range of different meanings – listening to the unique tones and variations will help cat owners understand what their cat is trying to tell them.

It’s been widely contested whether a cat actively mimics a baby’s cry or whether humans simply relate the similarities in the sounds with each other. What is clear, though, is that a cat’s meow will alert humans that it requires attention. Meows aren’t designed to be ignored.

Do Cats Learn to Meow from Babies?

Domestic cats are just as dependant on humans for their survival as babies are. When a cat finds itself in a situation where it needs something – like food, comfort, or warmth – it will send out the same signals as a human baby to receive the same attention.

A study on Diva Portal has found that cats learn to produce different meows for different purposes. Each meow is thought to be learned and attention-seeking, rather than a universal cat-human language. To some degree, cats can understand that certain sounds elicit a positive response and can tailor the sounds they ensure their needs are met.

It’s difficult to say whether cats learn their meows from babies, as studies in this area haven’t been conclusive. It does seem likely that cats mimic babies crying, however. Domestic cats don’t hunt for their food or have to fight off predators – humans are their main caregivers. Cats need to do everything they can to keep this relationship a fruitful one, so will appeal to our maternal instincts to achieve this.

Cats don’t meow to other cats – they meow only to humans. Kittens meow to receive care and attention from their mothers. As they grow older and become adults, they restrict their meows to human-only interactions. This is because meows are less threatening, kitten-like, and considered to be cute. Humans are also more likely to respond positively to a meow, reacting to it like we would when we hear a baby cry and giving the cat the care it needs.

In a paper published by Current Biology, behavioral ecologist Karen McComb explored how cats manipulate their owners through the sounds they make. She did this by setting up a series of experiments that studied the effects of a cat’s cry on humans.

In the experiments, McComb and her team recorded the purrs of 10 cats. Some were actively soliciting food, while others were recorded in a normal setting. 50 human participants then listened to these sounds and judged whether the purrs of the cats trying to get food were more pleasing than the normal purrs.

The participants deemed that the hungry cries were far more urgent than the normal cries, indicating that there is a clear difference between the two.

When it comes to whether a cat’s meow sounds like a baby crying, the study indicates that cats manipulate their human owners by meowing in a similar frequency to a crying baby. Cats can understand that when a baby cries, its parents are highly sensitive to the noise and will nurture it, so will do the same to get the same kind of attention.

Research suggests that to communicate better, cats can imitate nuances in their owners’ voices, including melody patterns. As reported in The National Center for Biotechnology Information, cats have evolved to communicate effectively with humans. They have done this by using specific vocalizations and by being able to distinguish between individual human vocalizations and human attention.

In the same journal as mentioned previously, Diva Portal, there is plenty of anecdotal evidence to suggest that cats imitate speech when interacting with humans. This is likely to be a learned skill to elicit certain responses or food. However, it’s important to remember that because of the position of a cats’ larynx, they’re only able to produce a limited number of human vowel and consonant sounds.

Susanne Schötz, Reader in Phonetics at Lund University’s Centre for Languages and Literature, has also discovered that cats can imitate their owners’ voices and create private languages with them.

By recording and analyzing purrs, meows, growls, and hisses, Schötz discovered how cats change the shape of their mouths to make different sounds. There is even evidence to suggest that the sounds cats make changes between different regions, meaning they adopt their humans’ accents to relate to them.

Cats will also respond to the tones used by their owners. If you use a happy, cheerful tone to talk to your cat, it will produce a short chirp in response. Similarly, if you’re angry when you speak to your cat – perhaps because you’re telling your pet off, it will respond in a low, elongated tone. This is probably because your cat is conscious of being in trouble.

As reported by Phonetika, cats respond more positively to higher-pitched sounds, so speak to your cat in a more smiley, less threatening tone to make it feel more comfortable.

Why Do Cats Meow at Humans?

Cats will meow at humans because they want something. Cats communicate with each other using body language, facial expressions, and scent. They rarely meow at each other as it doesn’t mean anything in the feline world. So, to get what they need from their human owners, cats have refined how they meow to alert us of their wants and needs.

And when it comes to us humans, we have become attuned to a cat’s meow. So much so, we can understand what our cat is trying to tell us.

However, that’s not to say we don’t need to try to pay attention to the sounds our feline friends are making. By listening to their unique tones and variations, we can figure out when our cat is hungry, stressed, in pain, or just wants attention.

But certain sounds can be overlooked. Cats can meow when they’re stressed and in pain. This means it’s important that cat owners keep an eye on this for any sudden changes in sound, as it could indicate something more serious.

What Do the Different Meows Mean?

Meows will be similar from cat to cat, even if the tones and quality differ slightly. Here’s what some of the meows mean:

Reasons Your Cat Will Meow

Some meows are happy, positive sounds. Others indicate that something is wrong. Below is a run-down of some of the most common reasons why your cat will meow at you. Each one will need a human’s attention in some way, but some are less urgent than others.

One of the most common reasons your cat will meow is because it’s looking for food. This meow will probably sound different from the others, as it’s been perfected by your cat to get food quickly.

This is also the cry that is most likely to sound like a human baby. It will sound urgent and shrill, and will be hard to ignore. This type of meow often comes with a purr too. This is to make your cat appear cuter and more likely to achieve the desired result.

A cat often has days when it wants to be stroked, hugged, or made a fuss of­ – especially if you’ve been gone all day and it has missed you. If you walk through the door to a succession of meows, or if there doesn’t seem to be an obvious reason behind the sounds your cat is making, take five minutes out to play with your pet and give it your complete attention.

If your cat is stressed or agitated, you’ll notice it becoming more vocal. Its meow might get louder and more frequent. It may also start to meow constantly ­and in quick succession. If this is the case, your cat needs your immediate care and attention to help calm it down.

A cat will make a similar sound if it is in pain, too. If you suspect your cat isn’t quite feeling itself, try to give it the once-over for any obvious signs of injury.

If your cat doesn’t have a cat flap and relies on you to let it in and out of the house, your pet will meow to attract your attention. If it’s raining, this meow will become more elongated and prolonged. Your cat also won’t stop meowing until it’s let in. Don’t delay ­­– open the door for your pet so it can get warm and comfortable again.

Cat Is in Heat

When a cat is in heat, it tends to make a distinct yowling sound. You might also have to endure a series of distressed caterwauling sounds. These noises aren’t particularly pleasant and can be difficult to bear, but they won’t last long. An unsprayed cat goes through heat for about six days. Although it’s possible that some cats will react differently when in heat and will instead let out a soft meow, coupled with a cute purr.

Paying attention to your cat’s meows and sounds will help you discover what your cat is trying to tell you. Even the most subtle variations can indicate something entirely different. And over time, you can even begin to build a unique language that only you and your feline friend understand.