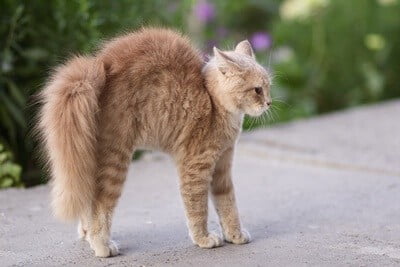 Cats communicate through body language and vocalizations. However, it can be difficult for humans to understand the meaning of an arched back. A cat raising its back can signify contentment or aggression.

Cats arch their backs to display affection, happiness, and contentment. So, a cat may arch its back and rub against you while being petted. It’s how cats ask for attention, greet you, or show pleasure. Sometimes, when combined with puffed-up fur, it’s used to make a cat look big and intimidating.

You’ll know the difference between the two based on other body language and/or the nearby presence of another animal. If a cat is hissing, flattening its ears, or dipping low to the ground when it arches, this is likely to be a sign of aggression.

Why Do Cats Arch Their Backs?

Cats hunch their backs mainly to communicate or react to some form of stimulus. There are various reasons why cats might bend their backs when being petted.

These include the following:

As you can see, the reasons for a cat arching its back can be positive or negative.

According to Anthrozoös, contentment is a popular interpretation. However, knowing whether your cat is displaying a positive or negative reaction can be tough without considering other cues.

The other body language the cat displays can tell you how it’s feeling, as can any sounds the cat makes while arching its back. For example, if the cat is purring while it arches its back, it’s feeling happy.

If it’s hissing, then it’s displeased. Cats that want your touch will lean into petting. Those that don’t will duck low to the ground and try to move away.

According to Animal Cognition, cats that have healthy and trusting relationships with their owners will even take emotional direction from them.

That means your cat may be interacting with objects and new people based on how you react to them. If you show fear, distrust, anxiety, or happiness when dealing with a situation or person, your cat’s behavior might well reflect that.

This can provide some insight into whether the arching is positive or negative.

Why Do Cats Move Their Backs When You Pet Them?

If cats scrunch their backs when you pet them, it usually means contentment and happiness. Arching into the touch will indicate that your cat enjoys the contact and wants more.

There are other reasons for a cat to arch its back while it’s being petted:

Cats need to stretch out their muscles. If your cat arches after waking up from a nap, it’s merely working out the kinks in its spine.

Cats arching their backs to stretch may yawn, shake their head, or dig their claws into and knead whatever they intend to sleep on. The latter process is sometimes called making biscuits.

By contrast, a cat that is arching its back because it feels playful may have its tail pointing directly up into the air.

The tail might also move slowly from side to side. The whiskers will be perky and directly stick out from the cat’s face. These are signs of alertness and can indicate that a cat is excited and ready to play.

Of course, cats displaying aggression may also seem alert. A feline arching its back when petted will soon make its feelings known.

This will involve a scratch or a speedy escape. The cat won’t quite lean into the touch but appear to be dipping its head low. It may even hiss or make a yowling sound.

Cats may show signs like aggression when they are stressed. This is usually from environmental stresses or as a reaction to other animals.

Your cat might arch its back alongside showing its teeth, flattening its ears, assuming a rigid posture, and widening its eyes. If this is the case, stop petting the cat and figure out what’s stressing it.

What Does a Cat Arching Back and Rubbing Mean?

You may find cats curving their backs and rubbing against you.

In this case, the cat reacts to the friction and pressure. It may be expressing enjoyment, but it’s likely moving to guide you (or itself) to a spot that needs a good scratch.

Cats have sensitive skin, so you can get a nasty scratch if you push their fur the wrong way. The cat may only rub against you with a light touch or briefly.

Some owners misinterpret this as teasing like the cat is trying to taunt you into picking it up. In most cases, it’s merely the cat gauging exactly how much pressure it wants, and it would appreciate a delicate touch if you pet it.

If your cat is rubbing up against you with its body, or particularly its head, this is a prime indicator of affection and love, which doubles as a greeting.

It’s saying hello and letting you know that it cares about your presence.

Cat Arching Back and Rubbing Against Objects

Cats are tactile and olfactory animals. In other words, touch and smell are just as important as sound and sight.

With that in mind, it’s no surprise that cats rub against objects as a way to learn about them and communicate their intentions.

Assessing The Object Or Person

By rubbing against an object, cats pick up information about other animals that may have been around it.

They can even detect where the object has been. This allows the cat to better understand what the object is if it’s allowed to play with it, and what it can expect from the object.

For example, if you introduce a new toy, the cat might arch its back and rub against it with its face. This allows it to pick up a variety of scents to learn from.

Of course, cats rub against objects to deposit their scent. A cat’s head and face are loaded with glands and areas that can deposit its pheromones.

Cats do this to stake their claim. They’ll often do this to mark their territory and toys that they considered their own, warning other animals off them.

Cat Purrs or Meows While Arching Its Back

If a cat meows or purrs while arching its back, you can be sure it’s having a good time. It’s the strongest way a feline can show its contentment.

Cats are unusually vocal animals and can meow for various reasons. A meow can easily sum things up if you’re still questioning why your cat is arching its back.

The cat is trying to:

Meowing while being petted might signal happiness, excitement, or a desire for attention or food. If your cat meows constantly, it may signify that it’s in pain or distress. The cat is attempting to get your attention to let you know something is wrong.

Purring, by contrast, is almost always a positive sign. According to the Journal of Zoology, it’s created by centrally driven laryngeal modulation of respiratory flow. The study found that purring is one of the most common ways for cats to show enjoyment and pleasure.

Most cats will show their contentment and pleasure when they arch their backs. That’s especially true when you’re petting them. As long as the cat doesn’t flatten its ears, move low to the ground, or make aggressive noises, you can be sure it’s having a good time.