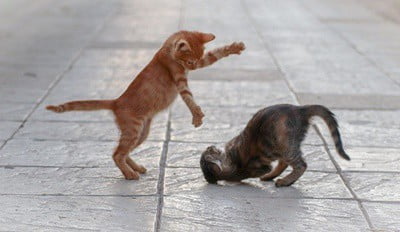 Have you ever seen your cat standing on its rear legs like a meerkat or prairie dog? While this move is endearing to human owners, it serves a valuable purpose in the wild as a survival technique.

As a survival tactic, cats will stand on their hind legs to make themselves look bigger and more intimidating. Mesopredators, like cats, do this to scare off threatening animals in their territory. Other reasons include getting an owners’ attention, reaching for food, and natural curiosity.

With so many reasons behind your cat’s two-legged stance, it might take some observation work and analysis before you understand what your cat wants or is trying to achieve.

Why Do Cats Stand on Two Legs?

Some cats regularly stand on their hind legs, and it’s not uncommon for them to walk around in that position. However, it can be confusing the first time a cat makes this move.

The reasons for a cat standing on two legs include:

It’s a survival tactic that allows a cat to appear larger.

The cat may puff up its tail and shuffle sideways while standing on two legs to further expand its size. This allows the cat to frighten off rival cats and dangerous/predatory animals.

As well as a two-legged stance, a cat will begin to hiss and growl if the predator comes too close. It’s ready for a fight but wants to avoid any confrontation.

Cats prefer not to fight unless there’s no other option.

Cats are naturally curious animals that like to know what’s happening.

If a cat has spotted something out of a window or an interesting bug walking on the ceiling, it’ll stand on its hind legs to get a closer look.

According to Science Direct, a cat has one of the broadest hearing ranges of mammals. They can hear sounds that humans can’t. So, when they hear something interesting, they’ll investigate.

It’s no secret that cats love to be petted.

If you’re not providing as much affection as your cat would like, it may stand upright to get your attention and receive the attention that it craves.

Coupled with the fact that a cat looks so cute, it usually works.

Most cats are tuned in to the rustling of a treat bag. So, when you get food out of a cupboard, an excited cat will stand on its hind legs to get a closer look and nearer to the treat.

Some special needs cats can only move around on their hind legs. Dubbed the kangaroo cats, several cats born without front legs have burst onto the social media scene.

Cats without front legs or paws use their hind legs to walk around. Their legs become so strong that affected cats can use them to hop around.

If part of the front legs remains, they’ll use them to gain balance or push themselves off the ground.

How To Get Your Cat To Stand Up

Get Your Cat’s Attention

Begin the training process by attracting your cat’s attention. Treats are the easiest way to do this, as you can use them for positive reinforcement.

Start by holding a tasty treat in front of your cat’s nose. Let your cat have a sniff to pique its interest. Before you feed it to your cat, pull the treat up out of reach so that your cat’s attention is on you.

Give a command, like “stand,” for example. Always reward the behavior, or your cat won’t have a reason to attempt the trick. To encourage your cat to stand, place the treat near your cat’s nose again and pull it up as it reaches for it. Keep repeating this until your cat begins to rise. Move the treat higher each time.

Some cat breeds are more prone to standing on their hind legs than others. This can be for various factors, but it often helps a cat with its everyday life. These are the most likely breeds to stand upright:

Munchkin cats are a controversial breed. While experts argue that the Munchkin is a healthy breed, some cats have lordosis, which is where the spinal muscles grow too short, making the spine sink down into the cat’s body.

As described in BMC Genetics, Munchkin cats were founded on a naturally occurring mutation. Short-legged cats show disproportionate dwarfism (chondrodysplasia), in which all four legs are short. As a result, Munchkins are known for standing on their hind legs.

Because of their short legs, Munchkins can stand tall while keeping their body perfectly balanced. As they are closer to the ground than most other cats, this move allows them to look around at their surroundings. Despite their stature, they are good jumpers and climbers and can walk, move and hop about on their hind legs.

Due to recent breeding programs, some Scottish Fold cats have picked up the same gene found in the Munchkin cat breed. This caused shortened forelegs and hind legs.

Scottish Folds are known for their human-like behaviors. They often sit with their hind legs displayed in front of them. And if something piques their interest, they will stand up to see what is going on.

Most Scottish Fold cats are affected by SFOCD, which is characterized by skeletal abnormalities. Cats with the disease have weak cartilage that isn’t strong enough to support their bodies. This includes not only the ears but the metacarpal bones, phalanges, and caudal vertebrae. Affected cats may be reluctant to jump and feel pain when they run or walk.

Is It Bad For Cats To Stand On Their Hind Legs?

A cat that stands on its rear legs regularly or for too long will place more stress on its hips, which could lead to pelvic injuries. For this reason, owners should encourage this endearing behavior too often.

When a cat decides to stand on its back legs, it’s rarely a problem. Cats make this move to satisfy their curiosity or get their owners’ attention to receive petting or food. However, cats will stand on their hind legs if they see another rival animal and want to make themselves seem larger.