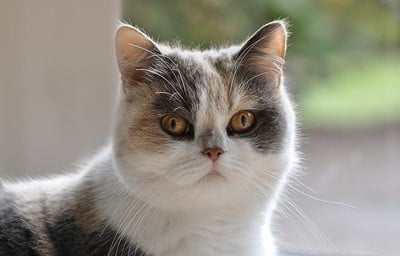 If your cat snores while sleeping or breathing, you may wonder if this is normal. Snoring is an irritating sound, especially if your cat sleeps near to you at night. Unfortunately, it’s not easy to stop a cat from snoring, but you can take steps to quieten the sound and prevent the snoring from getting any worse.

Some cats snore naturally, while others do so due to obesity, bad sleeping positions, dry air, short-headedness, and respiratory infections. Snoring occurs due to vibrations in the nasal and throat passages resulting from blockages or restricted airflow. Snoring is most likely to occur during deep sleep.

Snoring is common in cats, especially brachycephalic breeds with flat faces and short muzzles, such as Persians. Snoring isn’t usually a cause for concern unless it changes suddenly or becomes an issue when your cat is awake.

Is It Normal for Cats to Snore?

Cats have various sleep cycles. The U.S. National Library of Medicine found that cats go into a (REM) sleep phase. They experienced rapid eye movement, muscle relaxation, twitching, and other facial muscle activity during this stage.

After REM, cats enter a deep sleep, which is when a cat is most relaxed. This stage is responsible for rebuilding and repairing the body. It’s also when a cat is most likely to snore. Snoring occurs when the passages in the upper airways of the nose, pharynx, and mouth vibrate loudly during the sleeping stage.

Snoring is caused by an obstruction of the upper airway or soft tissue interfering with air passing through the nose or throat. Obstructions can include tumors, polyps, or foreign objects. Factors that can cause snoring include:

If a cat lies on its back or angles its head or neck in a way that restricts its airflow, you might hear your cat splutter or begin to breathe more heavily than usual. Your cat will eventually right itself by moving.

Larger cats with excess fat are more likely to snore. Fat accumulates in the tissues surrounding the upper airways, restricting the airflow and adding extra pressure on your cat’s nasal passages.

Brachycephalic means short-headed. Breeds with shortened nasal passages and elongated palates, like Persian, Himalayan, and Burmese cats, are more likely to be snorers.

Because they have been bred to have shorter noses, the tissue found in the upper airways causes a higher level of sound. You might even hear these breeds snoring while awake. They can also find it difficult to breathe, which can often sound like a snore but indicate that your cat’s nasal passage is blocked.

Dry Air in the House

If you live at a high altitude or in a dry climate, the air might be drying out your cat’s mouth and nasal passages as it sleeps, causing it to snore.

You may also find that your cat’s natural snoring sounds become louder as it fails to get the moisture it needs to soften the snoring sound. Placing a humidifier where it sleeps can add moisture to the air.

Some cats snore naturally. It might begin at birth or develop later on in life. Either way, it’s natural and rarely a cause for concern unless your cat becomes unwell and starts to display other symptoms alongside the snoring.

What Does It Mean When Cats Snore?

Some sounds are similar to snoring and can be confused. It’s important to monitor your cat’s snoring habits for sudden changes that may indicate an issue:

If your cat snores while sleeping, it is likely because it is in its most relaxed state. The tissue in the nasal and throat passages is soft, while vibrations cause the soft snoring sound. Cats with extra tissue or that sleep longer in a more relaxed state are most to snore louder and more frequently.

If your cat is relaxed (not asleep) and makes snoring sounds, it’s unlikely that your cat is snoring. It may have a mild respiratory infection that’s caused a small blockage of the airways. Also, heavy breathing can be mistaken for snoring. This is a good sign as it shows your cat is relaxed in your company and enjoying a rest.

Cats that make a snoring sound while awake have a blocked airway or soft tissue that prevents air from passing cleanly through the throat or nose. This occurs most often in brachycephalic breeds. The snoring noise might be a stertor (a low-pitched sound) or stridor (a high-pitched sound) that sometimes occurs during respiration.

However, your cat may have a respiratory infection or condition that causes a sound similar to snoring. If you notice a wheezing sound coming from the lungs, your cat may need medical attention. Your cat might also have asthma, which will need ongoing treatment.

The muscles around the throat, mouth, and nose grow weaker, causing the vibrations in these areas to become more intense. Respiratory problems are common in older cats.

Infections and diseases can affect the soft tissue around the nasal and throat passages, causing your cat to create noises that sound like snores, whether awake or asleep.

Do Flat-Faced Cats Have Breathing Problems?

‘Brachy’ means shortened, and ‘cephalic’ means head. Brachycephalic cat breeds have shorter bones in the face and nose, meaning the anatomy between these structures and the tissue is altered. This often causes breathing problems and snoring as they sleep.

Cats affected may make louder noises when they breathe and are likely to snore when sleeping. The following brachycephalic breeds are most likely to snore:

Why do Persian cats snore? Persians are known for having breathing problems. They also have bouts of snoring and can develop eating issues. Some Persians grasp their food with the underside of their tongue, causing them to underfeed.

Their narrowed nostrils, soft palates, and small tracheas result in labored breathing and noisy snoring as they sleep. Some Persians need medical intervention to lead a normal life.

Due to their Persian genes, Himalayans have inherited pushed-in skulls that can restrict the breed’s breathing. Noisy snoring can occur when a Himalayan is in the deep sleep stage. If a Himalayan has an elongated soft palate (not all do), which is the soft tissue that forms the roof of the mouth, the windpipe entrance can be blocked, causing snoring.

Exotic Shorthairs are prone to obesity. This can make snoring more likely as the excess fat places pressure on the airways and restricts airflow.

Exotic Shorthairs are more likely to develop brachycephalic syndrome or respiratory distress syndrome. This affects cats with short noses and flat faces. As there is less space for the tissue to grow, the soft palate becomes too long for the mouth and hangs into the airway. The nostrils and windpipe are often too small.

These issues cause obstructed airways, in the worst cases leading to sleep apnoea and intense snoring. Swelling and congestion can also develop in the lungs, thus exacerbating the problem.

Chinchillas aren’t as prone to health issues as other brachycephalic breeds. Their noses aren’t as flat, but they do have a short muzzle. This can cause snoring while in the deep sleep stage. It’s usually quieter than other flat-faced cats.

Scottish Folds have a range of health problems. Their faces aren’t as flat as Persian or Himalayan breeds, but their short muzzles make them prone to snoring, although they are usually quiet and soft sounds.

The breed is not known to have common respiratory issues, but they are more prone to snoring than other cat breeds with longer muzzles. They make soft snoring sounds instead of loud, choking sounds while they sleep.

If your cat is awake and making snoring sounds, it likely has difficulty breathing due to a health issue.

In Veterinarians by Veterinarians, a stertor is described as a low-pitched snoring or snorting sound that results from turbulent airflow caused by a partial obstruction of the upper airway. It will occur from somewhere between the nasal passages and the back of the throat. As well as a snoring sound, your cat’s breathing may sound like nasal congestion.

A stridor is a higher-pitched wheezing sound. It’s likely caused by a blockage in the larynx or windpipe and can be heard when your cat breathes in. Stridors can also occur due to bacterial infections.

Wheezing – or a continuous high-pitched whistling sound – that can be heard when your cat breathes out is likely to be caused by a narrowing or obstruction in the lower airways.

How To Tell If Snoring Is A Problem

Snoring will be most noticeable if it has only recently started or if your cat has never snored before. If you notice any of the following, seek guidance from a veterinarian:

How To Stop Cats Snoring

Some cats are prone to snoring and will do so their entire lives. Natural snoring is hard to prevent. As long as your cat is happy and healthy, snoring is rarely a cause for concern. However, snoring can sometimes be prevented:

Overweight cats are prone to snoring as their extra weight affects or blocks the upper airways. As your cat loses weight, you should find the snoring quietens down. It may even stop completely.

Placing a humidifier in places with dry air adds moisture to the surroundings, reducing your cat’s snoring. Humidifiers can assist with nasal and throat congestion, preventing the respiratory system from drying out.

Snoring is often accompanied by vomiting, diarrhea, decreased appetite, pain, and lethargy. If your cat’s snoring is caused by foreign objects, tumors, or polyps, a vet can remove these blockages and clear your cat’s airways.

If your cat sleeps awkwardly, it could be because it can’t find a place it feels comfortable. Cats will find the strangest places to sleep, but it always helps to provide a bed or living area that offers comfort and warmth for your cat.

Laying blankets and pillows down in your cat’s favorite spots will encourage it to lay properly, reducing the risk of your cat bending its head or neck in ways that make it difficult to breathe.

Snoring is usually a natural process, especially in flat-faced breeds, that lasts throughout your cat’s life. Even if snoring starts to occur as your cat gets older, it’s usually just part of the aging process. Monitor your cat’s snoring as sudden changes could highlight a health issue that needs to be addressed by a veterinarian.