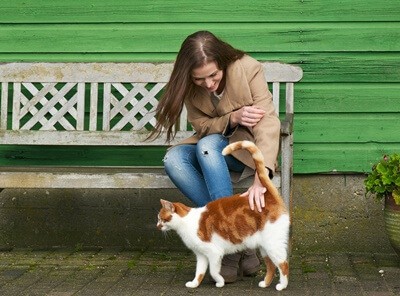 What may look like strange feline behavior is actually your cat trying to communicate with you. Cats use various parts of their bodies, including their rear ends, to express a range of messages and emotions.

Cats point their bums at their owners to say hello or get their attention. It means they trust you implicitly, as cats never show their backsides to anyone unless they feel comfortable. Because cats have scent glands at the base of their tail, they use that area to scent mark you.

Once you understand feline body language, nothing about your cat will appear that unusual, including how a cat uses its butt to communicate.

Table of Contents show
1 Why Do Cats Always Show Their Bums To You?
1.1 Saying Hello
1.2 Wants Attention
1.3 Trust
1.4 Scent Marking
1.5 Butt Massage
2 Is It Bad If My Cat Puts Its Butt in My Face?
3 Why Do Cats Like It When You Pet Their Bum?
4 Why Do Cats Stick Their Bum in The Air When on Heat?

Why Do Cats Always Show Their Bums To You?

Cats turn their butts toward people to communicate several things, including:

No matter how your cat was socialized as a kitten, one thing is true for all domestic felines: they see humans as large, hairless members of the clowder.

Of course, cats know that you aren’t a cat, but they still don’t understand that you can’t communicate like one. So, they’ll point their posterior toward you, believing that you’ll grasp the message.

Butt sniffing is usually associated with dogs, but cats also do it to communicate.

Cats have scent glands all over their body, including the base of the tail. Scent glands help cats release pheromones, which are chemicals that provide unique information about the cat.

When your cat points its butt at you, it’s trying to greet you by giving you information.

Have you ever wondered why your cat keeps doing something it shouldn’t, even though you keep telling it not to? Well, maybe it wants your attention.

Cats know when you’re crying or upset, but cats don’t see negative human reactions toward them as a bad thing. As long as the cat gets your attention, it’ll be happy to continue with that behavior.

When your cat points its bum at you, be aware of how you react.

Perhaps your usual reaction is to:

If so, you know what the cat is looking to get when it presents you with its butt.

If you dislike it when your cat points its butt at you, especially if it’s close to your face, you need to ignore your cat when it happens.

It may take a while, but your cat will soon learn that it isn’t an effective way to get your attention.

Cats are broadly known to be less friendly than other popular pets because they often feel unsafe, even in their own home. However, if a cat points its butt toward you, it means that it trusts you.

Having a distrusting, cautious nature means that cats never turn their backs on people or animals they’re wary of. They always like to keep an eye out for potential danger.

However, a cat will flop on the ground belly-side up when it trusts you. Likewise, it’ll also point its bum toward you to inform you that it doesn’t think you’re a threat.

It may be strange to get an up-close view of your cat’s butt, but it presents that side of itself out of love.

According to the Canadian Journal of Zoology, cats use the scent glands in their face and tail to mark their territory.

If this information grosses you out, know that your cat does this because it cares about you and doesn’t want other cats to get near you.

If your cat is male, it’s trying to rub against you with its butt to scent mark you. Male cats scent mark more than female cats, though territorial females are also likely to do this.

One of the places cats like being touched is their lower back.

They enjoy being pet there because it’s a sensitive spot. Cats will often lift their butts when petted there because it enables them to scent mark their owners while being massaged.

This doesn’t mean that your cat wants affection once its immediate needs are met. Its reaction toward further petting will let you know if it wanted a cuddle or just butt patting and scratches.

Is It Bad If My Cat Puts Its Butt in My Face?

It usually means that your cat likes you and wants your attention. When your cat does this, and whether it turns into a negative interaction, is how you respond to this behavior.

Although it may be unpleasant, especially if your cat’s bum is near your face, you shouldn’t display a negative reaction. Remember, your cat doesn’t abide by the same social rules that humans do.

It doesn’t understand that you don’t appreciate how it displays affection. So, if you behave negatively, this may confuse your cat. Depending on your reaction, it may stop seeking affection in obvious ways.

If you want to stop your cat from pointing its butt at your face, you need to do so gently. Pick up your cat and turn its butt away from you without saying any other word apart from no.

Why Do Cats Like It When You Pet Their Bum?

The base of a cat’s tail is extremely sensitive due to all the nerves located in that area. It’s also a place that cats can’t reach when grooming themselves. So, they appreciate it when you pet that area for them.

Hepatoid glands secrete oils that lubricate animals’ skin and fur. Because this part of a cat’s body has so many nerves and cells, cats enjoy being touched there since they can’t do it themselves.

Why Do Cats Stick Their Bum in The Air When on Heat?

Female cats stick their bums in the air when in heat to signal that they’re open to mating.

It happens when the female is fully in estrus, which lasts around 6 days. During estrus, your cat will instinctively want to signal male cats that she wants to breed. Aside from mating vocalization and pheromones, your cat will want to show that she’s ready by lifting her posterior in the air.

A female cat in estrus will assume this position after being petted at the base of her tail. This doesn’t mean that she thinks you’re a cat and wants to mate with you.

After all, you can’t display mating signals the way a male cat would, so your female cat is just instinctively responding to stimuli during an intense part of her life.

Cats point their bums at you to express positive emotions, ranging from contentment to asking for attention. How you respond will determine if your cat only does this once or it becomes a regular habit.