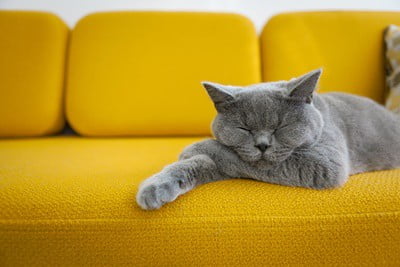 Cats are at their most relaxed when they’re asleep. Their breathing should be slow and steady during this time, and the chest should rise and fall gently. But how fast should a sleeping cat breathe, exactly?

A regular breathing rate for cats is between 15-30 breaths per minute. Cats may breathe fast when sleeping due to heart disease, a respiratory infection, asthma, injury, trauma, or windpipe obstruction. However, rapid breathing isn’t always a sign of a health condition. Cats experiencing stress, heat exhaustion, or over-exertion will breathe faster as they cool and calm themselves down to sleep.

If a cat’s overheated, its breathing may turn rapid and shallow. When this happens, your cat will pant heavily with its mouth open to cool its internal temperature. Stress and over-excitement are also responsible for fast breathing, but it should return to normal quickly.

How Fast Should a Cat Breathe While Sleeping?

VCA Hospitals confirms that a healthy cat’s sleeping respiratory rate should be between 15 to 30 breaths every minute while sleeping or calmly resting. Lower rates are possible, but they’re usually no cause for concern, as long as your cat’s acting normally at all other times.

As your cat breathes, you should only notice small, slow movements of the chest. If the sides move an excessive amount or you hear slow, fast, or noisy breathing, your cat’s likely having breathing difficulties.

You can measure your cat’s respiratory rate by counting the number of breaths your cat takes while it sleeps. Each breath includes:

Time your cat’s breaths for 30 seconds using a watch or phone to time and multiply by two to get the number of breaths your cat takes every minute.

Is It Normal for Cats To Breathe Fast While Sleeping?

Cats breathe faster when they sleep than we do. That’s why you might panic when you first witness how many breaths your cat takes while resting. It’s not abnormal for rapid breathing in cats while sleeping if they’re:

In most cases, a cat with any of these things will experience normal breathing after a few minutes. However, resting rates that are consistently higher than 30 breaths per minute are abnormal and indicate a health issue. There are three main types of rapid breathing in cats, including:

All three indicate that something’s potentially wrong with your cat’s health and shouldn’t be ignored.

Why Is My Cat Breathing Fast While Sleeping?

Problems associated with heavy breathing when sleeping include:

Panting is usually the sign of heat exhaustion from being too hot. If your cat’s been sitting directly in the sun or your home’s not well vented, it’s likely your cat’s attempting to cool itself down.

In many cases, your cat will pant for a few minutes before regulating its breathing after getting cool. It will then sleep to regain its energy. If your cat struggles to cool down or begins to gasp or gag, move it to a cooler spot or rise it with cool water – but only if it’s okay with water.

Stress, nervousness, or anxiety can cause your cat to breathe heavily, even while it sleeps. Stressed cats struggle to get comfortable and may continuously move around restlessly. This is a clear sign your cat feels distressed. Try to determine what might be causing your cat’s stress and remove them from your pet’s environment.

Your cat may also develop muscle weakness or paralysis in its hind legs. Heartworm, heart failure, and heart murmurs are also responsible for fast breathing and must receive treatment. In the later stages of heart disease, your cat’s breathing will sound phlegmy or rattly from a build-up of fluid.

Upper respiratory infections are common in cats. They’re caused by bacteria and viruses targeting the throat, nose, and sinuses, resulting in breathing difficulties. The symptoms are very similar to the common cold, but they can be serious.

Infections of the lower respiratory tract occur in the lungs, bronchi, and trachea. Lower respiratory infections are more likely to cause rapid breathing, but Cornell University College of Veterinary Medicine explains how it shouldn’t exceed 35 breaths per minute while your cat rests.

Your cat’s breathing speed will be worse when it sleeps. That’s because awkward sleeping positions can put pressure on the respiratory organs, causing your cat to breathe faster and harder. Most cats correct how they sleep after a few minutes, which may help to ease and regulate their breathing.

Tachypnea is commonly caused by low oxygen levels in the blood (hypoxemia). It occurs when the blood in the arteries doesn’t get sufficiently oxygenated, meaning the organs don’t receive enough oxygen. This is a dangerous condition that can lead to brain damage, anemia, and, eventually, heart failure.

Asthma is a disease of the lower airways that affects approximately 5% of all cats. Scientists don’t have the exact reason why cats suffer from it, but allergic reactions to toxins in the air are likely to blame. Many cats experience rapid, labored breathing, even when they sleep, alongside:

Your cat may also have the sudden urge to hunch over and cough or breath rapidly. This can occur while the cat’s awake or asleep, making life uncomfortable for the animal.

Injury, trauma, and pain are all responsible for rapid breathing. When a cat’s distressed, its breath will become shallow and irregular, and the rate will increase the worse the pain gets. This also indicates that your cat cannot get enough oxygen into its lungs to supply the body.

Look for any signs of injury or specific pain points and seek veterinary treatment to prevent them from worsening.

If your cat seems healthy but breathes abnormally fast, a foreign object could be blocking its windpipe. If it’s stuck too far up the windpipe, it can stop your cat from drawing enough oxygen into your lungs. This can be highly uncomfortable. It’s also potentially life-threatening.

Anemia is a medical condition where the body doesn’t have enough red blood cells or hemoglobin. Sometimes, cats suffer from both. It’s not a disease in itself but the result of another condition.

Not only will cats breathe faster, but they’ll appear listless with little energy or interest in doing anything. As a result, they’ll spend most of the day sleeping. They’ll also lose the pinkness of their gums and may experience blood loss from the nose, stool, or urine.

The only way to determine anemia is to test for it through blood samples, which are performed as a complete blood count.

Do Cats Breathe Heavy While Sleeping?

Not all cats breathe rapidly when they sleep. Some breathe heavily, drawing deep breaths that make the chest rise and fall slowly. While your first thought might be to panic, heavy breathing isn’t always the sign of a health condition.

Some cats snore, which can either be a loud or soft sound. Your cat might make a few weird breathing sounds from time to time while it sleeps, but it’s nothing to worry about. Brachycephalic cat breeds with flat faces and short noses are more likely to snore and snort.

Sometimes, however, snoring results from a health issue in the nose, throat, or lungs. If so, your cat will make the following sounds while sleeping:

Look out for discharge from the nose and eyes and check for coughing. If your cat seems uncomfortable when sleeping, get a vet to check it out.

Why Is My Cat Breathing Through Mouth When Sleeping?

If your cat breathes through its mouth while sleeping, it could be panting due to heat exhaustion or stress. It also happens when cats overexert themselves. It would make sense for your cat to relax and fall asleep straight after strenuous activity, as it needs to recuperate its energy.

However, if this happens frequently, open-mouthed breathing could be the result of heart and lung disease.

Open-mouthed breathing also signifies that your cat can’t breathe through its nose properly. As mentioned, flat-faced cat breeds are most at risk of this, but colds, infections, and sinus troubles cause blockages. If the problem persists, it’ll likely develop into an upper respiratory disease or condition. Other causes of open-mouthed breathing include:

Don’t leave your cat to suffer – schedule a vet appointment as quickly as you can.

Why Is My Cat Breathing Fast and Twitching While Sleeping?

During the rapid eye movement stage of sleep, cats are most likely to dream. Its eyes will move rapidly, and its paws and eyes will twitch. The US National Library of Medicine explains how cats lose muscle tone and muscle twitches during this stage.

Your cat will seem active, but that’s because the brain is firing out as much activity as when the cat’s awake. Because of the increased brain activity, cats breathe more rapidly and make vocalizations and suckling sounds.

Younger cats and kittens are more likely to twitch while sleeping. That’s because as they grow, their immune systems work hard to make neuron connections, and, as a result, they constantly fire, making them move their limbs more often.

When twitching and rapid breathing happen simultaneously, there’s nothing to worry about. However, be wary of seizures. Seizures typically last for a minute or two, but they can be scary to witness, especially for the first time.

During a seizure, cats experience sudden, abnormal electrical impulses the disrupt the brain’s natural processes. To determine an episode from simple sleep twitching, look for:

Your cat’s fast breathing should also subside after a minute or so once it enters the deepest form of sleep: non-REM.

Why Is My Cat Breathing Weird While Sleeping?

Abnormal breathing could be as simple a sign as snoring and a mild cold. But it can also be an early clinical clue that your cat’s developing heart failure. Seeing the symptoms early enough can minimize the risk, allowing you to treat it before it becomes a significant problem.

If your cat suddenly makes noisy breathing that you’re not used to, your cat could be suffering from:

New noises are rarely a good sign and should be checked out by a vet as a matter of urgency. In the meantime, keep checking your cat’s resting heart rate to see how fast it’s breathing at the same time as making strange noises. Rapid breathing is a worrying sign alongside strange noises.

Similarly, if your cat’s obese, the excess weight can cause increased respiratory noise. Overweight cats are more at risk of wheezing and snoring because of the additional fat surrounding the cat’s airways and neck. This makes it harder for them to breathe. This isn’t the most troublesome sign, however. Obesity increases the risk of:

If your cat’s overweight put it on a diet before any of these health problems develop. Obesity is just as problematic as more serious conditions.

Any time your cat starts breathing abnormally, monitor it for 10-15 minutes and write down any patterns. That being said, you shouldn’t delay when it comes to health conditions. Take your cat to the vet for a check-up.