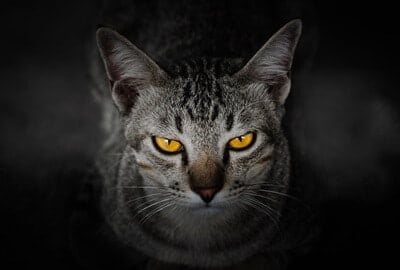 Dogs are a man’s best friend, but cats are often enrolled as the sidekicks of villains and the alternate form of evil sorceresses. Why are cats always the bad guy?

There are three theories why cats are portrayed as evil:

Hollywood is partly to blame as many villains in movies and TV series have cats. Of course, this doesn’t mean that domesticated cats are inherently evil. This portrayal is a blend of misunderstandings, superstition, and purposeful trope-building that’s created the perception of cats as the more sinister pet to own.

Table of Contents show
1 Why Do Cats Look Evil?
1.1 Shiny Eyes
1.2 Vertical Pupils
2 Why Are Cats Always the Bad Guy?
2.1 Behavior in Contrast to Dogs
2.2 Cats Are Historically Bad Omens
3 Why Does Hollywood Hate Cats?
3.1 Why Do Villains Always Have Cats?
4 Why Are Cats Considered Evil?

Why Do Cats Look Evil?

If you’re not used to how a cat’s eyes look, you may perceive them as odd, unsettling, or even “evil” in appearance. While it’s not true to say that cats are evil, this perception of their eyes as “weird” isn’t entirely unfounded.

There are two things that you may notice with a closer look:

In the dark, you may notice that a cat’s eyes shine when light is reflected off them, giving cats an ominous look. Additionally, if you look closely at a cat’s pupils, they are not a common shape.

A cat’s pupils change shape based on its stimulation level, but one of these potential shapes is vertical. For some, this is alluring and beautiful, while for others, it’s unnerving and strange.

There’s a reason why cat eyes look shiny when light reflects off of them at a certain angle in the dark.

Cats have a layer of tissue, known as the tapetum lucidum, that sits behind their retinas. The retina is an area located on the back of the eye that holds light-sensitive cells.

According to the College of Veterinary Medicine, the tapetum lucidum enables cats to see much better in dimmer environments. Researchers found that this special tissue does this by providing the light-sensitive cells in the retina to intake more light, even in low-light environments.

That’s is why cats can see so well in the dark. Furthermore, when light is directed over their eyes, it’s the tapetum lucidum that gives cat eyes that characteristic shine.

Some find that the vertically-shaped pupils give cats an evil look. However, these uniquely shaped pupils don’t exist for that reason. In fact, there’s an evolutionary advantage to having vertical pupils.

According to Science Advances, vertical pupils are common among nocturnal predators. The unique shape of their pupils enables cats to gauge the amount of distance between themselves and their prey.

It may be easier to understand if we compare sight through vertical pupils to how we see with our rounded pupils. When we determine how near or far away something is, we can see the nearer objects much clearer, with farther-distanced objects blurred in comparison.

For the cat with vertical pupils, this isn’t the case. Cats can see both near and far objects rather clearly, aiding their innate ability to hunt their prey.

Why Are Cats Always the Bad Guy?

There are several theories on why cats are always portrayed as the bad guy:

Behavior in Contrast to Dogs

If you are more of a dog person and come across a cat for the first time, it may be jarring.

After all, their behaviors and mannerisms can be so starkly contrasted against each other. For starters, dogs are often affectionate, excitable, and tend to love attention.

Cats are more independent compared to their canine counterparts. That’s matched to being lower in energy, and they can become overstimulated with too much attention. For instance, a cat can be thoroughly enjoying a good petting session before suddenly lashing out.

It’s not uncommon for cats to become overstimulated by attention, and this can be misinterpreted as evil behavior. However, this is their own way of telling you that enough is enough.

For those unused to feline behavior and more familiar with dogs, this can be seen as rude. Of course, each animal’s personality is unique from the next. Not all dogs love attention, and not all cats hate cuddling.

Furthermore, cats in a variety of different cultures have historically been viewed as bad omens.

The earliest example dates back to the Middle Ages in Europe. This took place around 500 to 1400-1500 ce, where domestic cats were associated with witchcraft and omens of death.

This idea was also held by Italians in the 16th century, as well as during the Salem Witch Trials in Massachusetts between 1692-1693.

These beliefs are some of the many origins of the iconic witch’s pet being a cat. Due to these historical associations, we may have unconsciously held this view of cats as being the bad guy.

Why Does Hollywood Hate Cats?

Because cats are always made to be the bad guy in various forms of media, it may seem as if Hollywood hates cats.

As mentioned, this may have to do with cats looking evil, acting differently than dogs, and being seen by different cultures throughout history as having an evil reputation. Filmmakers looking to quickly make a point in their movies can easily fall back on the stereotypes associated with cats.

Cats are seemingly less sociable and angrier than dogs, which might be the prime reason Hollywood portrays cats in this way. Perhaps it is for these reasons that so many villains in movies and series have cats.

Why Do Villains Always Have Cats?

On top of these reasons, many cats are easier to hold still on-set. This is where the phrase “lap cat” comes from.

Many cats are content with staying still on actors’ laps for many scenes in comparison to dogs. Furthermore, since many people still associate the look of a cat with mischievous connotations, the idea of a lap cat just stuck—particularly for villains.

The following table is a list of cartoon villains with cats:

Imagine if they had replaced the villainous lap cat with a dog. While some dogs can hold still in laps, they’re usually more energetic and cannot do as well as a cat.

Furthermore, many domestic cats have the appropriate body size to sit in a lap. Various dog breeds are too small or too large to serve as a villain’s lap cat.

However, that isn’t to say that all villains in Hollywood films or television series strictly have cats as their pets or sidekicks. Many action films utilize large and more “aggressive” looking dog breeds as villain guard dogs.

That’s simply a trope that our domestic cats cannot fulfill. Therefore, not all villains have cats, and cats are not always seen as evil in Hollywood.

Why Are Cats Considered Evil?

There’s no one reason why cats are considered evil, especially in contrast to dogs. It mostly relates to their:

However, just because a cat looks a certain way or is depicted as evil doesn’t mean many are. In fact, many domestic cats are often misunderstood due to these very reasons.

According to the National Library of Medicine, 57% of adopted cats are surrendered back to the studied shelter after being owned for less than 60 days.

The reason within this study was not clarified and categorized simply as “personal reasons.” However, it’s not a stretch to say that it may be because these animals were not understood well by their owners. Many new owners are unprepared for many natural cat behaviors.

Some of these include:

The Massachusetts Society for the Prevention of Cruelty to Animals provides evidence for clawing and stress-related spraying as some of the common reasons why cats are surrendered back to their shelter alone.

This shows that many new owners are not as thoroughly prepared for owning a cat as they may think. Other reasons include financial issues and accidental litters.

Domestic cats are not out there to get you, as many media and old cultural ideas make them seem.