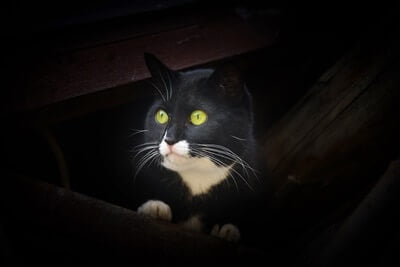 Cats move with grace and ease at night, as though able to see perfectly. However, cats cannot see in complete darkness, but they do have superior night vision to humans. A cat’s eyes tend to glow like tiny torchlights.

Why Do Cats Eyes Glow At Night?

A cat’s glowing eyes could be compared to the red-eye effect of human photography. When exposed to flash photography, our eyes reflect bright light from our retina. This appears red, as the image captures reflections of the blood vessels behind the eye.

Cat eyes usually glow a different, bright color. This is due to the tapetum lucidum, a layer of reflective cells behind a cat’s retina. Tapetum lucidum translates as “shining layer” in its original Latin.

The glowing effect occurs through this reflection process. As cats have such wide eyes, plenty of light is taken in. The cells found in the tapetum lucidum then bounce this light back, creating illumination. The brighter a cat’s eyes are glowing, the stronger its vision will be in poorly illuminated areas.

Can Cats See in The Dark?

The feline eye is large and round, designed to optimize peripheral vision. In addition, this improves feline night vision. The size of cats’ eyes ensures that they absorb and reflect even the dimmest light.

Streetlamps, or even the light of the moon, will provide a cat with sufficient illumination to see well. This means that a cat can detect predators and hunt by night. Also, cats can feel their way around in the dark using their whiskers.

Cats’ eyes glow like small but penetrative flashlights in the gloom. This may look a little eerie, but it is a positive thing as it means that your cat’s night vision is operating at full capacity.

The color that a cat’s eyes glow in the dark depends on various factors. The pigmentation of the eyes and fur are prominent influences. Age will also change the color of a cat’s eyes at night. As the cat grows older, the tapetum lucidum becomes less impactful.

You may find that your cat’s eyes glow a different color to their usual shade. The illumination of a cat’s eyes is not the iris itself. It is a composition of cells found in a cat’s tapetum lucidum, which magnifies this coloration.

The most common elements found in a cat’s tapetum lucidum are zinc and riboflavin. The latter, in particular, is common in the feline eye. An excess or inadequacy of these cells will influence the eye color at night.

Green is the most common color for feline eyes to glow in the dark. This is partly because shades of green are among the most common eye colors in cats. The following breeds of cat have green eyes in light and dark conditions:

Even if your cat has green eyes, not all feline eyes will glow the same shade. There are subtle differences in shades of green, even within identical breeds and siblings. Also, be aware that alternative iris colors can still glow green at night. This is a response to the cells found in the tapetum lucidum.

All kittens are born with blue eyes. This means that young cats, in particular, will display glowing blue eyes at night. Over time, the color of many cats’ eyes changes. Blue eyes are common in certain adult cat breeds, though. Notable examples of blue-eyed felines are:

If your cat’s eyes are usually blue and they glow this color, it’s rarely a cause for concern. However, if your cat has white fur and blue eyes, check for black seal points. This suggests that the cat will retain age-appropriate levels of vision.

Unfortunately, white-furred, blue-eyed cats without these markings can be prone to early blindness. This will lead to eyes glowing red at night. The tapetum lucidum is not functioning appropriately.

Siamese cats have blue eyes, but their eyes frequently glow yellow or gold. This is a natural quirk of the Siamese breed and isn’t a cause for concern.

In other breeds, yellow eyes can be a symptom of riboflavin in the cat’s diet. Consumed to excess, this vitamin can cause liver damage. Thankfully, such toxicity is rare in felines. Cats naturally have more riboflavin in the tapetum lucidum than zinc.

If you are concerned, increase your cat’s intake of animal meats and fats as this helps the cat ingest more taurine, countering the riboflavin and boosting night vision. A deficiency of this vitamin is more harmful than having an excess.

Red eyes could also be a result of a surprising light source. If a cat’s eyes were not expecting to be flooded with light, they will rapidly dilate, leading to a bloodshot appearance. This should be a temporary and not a regular aesthetic.

If a cat has mismatched eye colors, this perfectly natural. The tapetum lucidum is reflecting the varying core colors. If you only notice this from certain angles, it is just the light reflecting from different positions. If the issue occurs suddenly, its vision may be failing in one eye.

A cat’s eyes should always glow in dim conditions. If your cat’s eyes fail to illuminate in gloomy conditions, it may be struggling to see well.

The tapetum lucidum needs some light to reflect. Cat eyes are no more functional in pitch darkness than those of a human. Equally, if you switch on a light, the cat’s eyes should narrow in self-preservation. This prevents light from reaching the retina and tapetum lucidum.

You can check your cat’s vision at home. Do so during daylight hours, when your cat is awake and alert. Techniques for home eye tests include:

If your cat does not respond to these stimuli, you should consult a vet. As explained by Vision Research, temporary light blindness can be reversed.

A cat’s eyes should only glow at night, especially for prolonged periods of time. If your cat’s eyes seem to glow during the day, in bright light, something is amiss. This suggests that your cat’s pupils are unnecessarily dilated, attracting more light than is required. When faced with a direct light source, cats should narrow their eyes. Explanations include:

Occasional eyeshine during daylight isn’t a medical concern. Your cat could have widened its eyes due to heightened interest or fascination, perhaps because it’s spotted prey using its peripheral vision.

A cat’s eyes glowing in the dark is not spooky or sinister, even if this visual is often associated with Halloween. It’s all part of functional feline eyesight during the night or gloomy conditions.