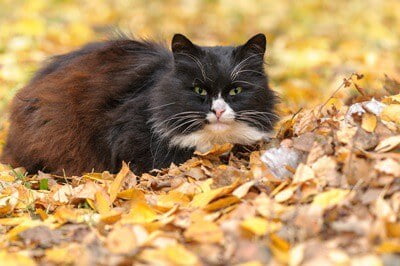 Like paw pads, cats’ noses change color due to external elements. Aging, exposure to sunlight, and food dyes can alter the shade of a cat’s nose. However, a change in the shade of nose leather can indicate a health concern.

Cats’ noses can change color from pink to dark (freckled) due to lentigo simplex. Excitement, temperature changes, staining, bruising, allergies, Cushing’s disease, and hypertension can alter the shade of a cat’s nose. Also, if the nose becomes pale, the cat may have circulatory issues.

A cat’s nose will change color throughout its life, and it may appear to do so seemingly at random. Unless your cat displays other uncharacteristic behaviors, this is rarely a cause for concern.

Why Do Cats’ Noses Change Color?

There’s no such thing as a default color of a cat’s nose.

Some cats have bright pink noses, while others are jet black. It depends on the color of the fur because the same pigments influence the shade of your cat’s nose leather.

This means that changes to the color will be easier to spot in some cats than others. For example, it’ll be impossible to ignore a pink nose turning black, which is called hyperpigmentation.

Here are the different reasons why cats’ noses change color:

As cats grow older, they develop more freckles across their skin, which is referred to as lentigo.

The liver spots that occur on aging human skin are a form of lentigo. In cats, it’s likely to be lentigo simplex, which is the most basic form of lentigo and is completely harmless.

Lentigo begins around a cat’s lips and mouth but will later become apparent on the cat’s nose. The eyes and gums can be affected as the cat ages.

Cats with orange fur are most likely to develop lentigo at a younger age, but it’s unrelated to sun exposure.

Lentigo can initially be alarming, as the spots could be mistaken for melanoma. However, a key difference is that lentigo creates small spots that are barely raised from the skin. Melanoma spots will be larger and more elevated, and lentigo freckles tend to be more spaced out.

Lentigo spots on your cat’s nose are just an aesthetic imperfection. The International Journal of Science has made it clear that no veterinary intervention will be required for this condition.

The sudden darkening of a cat’s nose can be caused by bruising.

Cats don’t bruise externally, but bruises occur under the skin, which is referred to as hematomas. A hematoma is a minor rupture of blood vessels underneath the skin.

Collisions are a common explanation for feline nasal hematomas. The cat may have walked into something, such as a branch from a tree or furniture, or have entered a conflict with a rival neighborhood feline.

According to The American Journal of Veterinary Research, not all hematomas are caused by trauma.

Sometimes, this can be explained by issues with immunity, which is often an inflammatory condition. This becomes more likely if your cat is having a nosebleed.

Treat your cat’s nosebleed before seeking an explanation. Blunt trauma is a possibility, or the cat may have a respiratory issue, such as Feline Herpesvirus (FHV). This will be accompanied by nasal and ocular streaming.

Your cat’s nose may have changed shade because it’s temporarily stained. Cats explore the world through scent, so they may have buried its face in food that contains natural dyes.

A cat’s nose can be sensitive, so gently dab the area with a damp cotton ball to remove any temporary stains.

Cats lick their noses throughout the day, hence why their noses are frequently wet. If the cat has a toxic substance on its nose, you don’t want this to be ingested.

The hyperpigmentation and thickening of a cat’s nose can be linked to an allergic reaction.

Your cat will also display other symptoms, such as:

Food is the most common source of feline allergic reactions, but your cat may be responding to something in its environment. If your cat has not recently sampled new food, consider any other changes in the home.

A cat’s nose has lots of blood vessels, which is why hematomas are so common in this part of feline anatomy. These blood vessels mean that a cat’s nose color will vary according to the temperature.

An excited cat will have a darker nose leather as blood rushes to the head when excited or over-stimulated.

Once the cat calms down, the nose should return to a normal, lighter shade. It may have hypertension (high blood pressure) if this doesn’t occur.

Hypertension impacts many cats, especially older felines. Left unmanaged, hypertension can be fatal. Darkening of the nose isn’t a means of diagnosis, but it merits further investigation.

A cat that grows excited, stressed, or overstimulated may experience acute hypertension, which is a sudden increase in blood pressure. The severity of hypertension depends on your cat’s overall health.

As cats grow older, they’re more likely to develop systemic or chronic hypertension. According to The Journal of Veterinary Internal Medicine, this can arise suddenly.

Symptoms to look out for include:

If your cat’s nose becomes much lighter, it may be due to poor circulation. It occurs because blood isn’t reaching the blood vessels in the cat’s nose, so the nose starts to lose color.

It could point to feline cardiomyopathy. A study in The Journal of Feline Medicine and Surgery suggests that British Shorthair cats face a higher risk of developing this condition.

If your cat has heart disease, blood won’t pump around the body optimally, leaving your cat feeling cold.

The cat lacks potassium, leading to hypokalemia, which leads to anemia.

Hypokalemia means that your cat’s diet lacks sufficient potassium. Potassium-rich foods and supplements will usually correct the problem. If not, intravenous fluids will be necessary.

Leukotrichia (vitiligo) is a rare condition that removes pigmentation from a cat’s fur and skin. It often starts at the bridge of the nose but will spread throughout the body, leaving white patches seemingly at random.

Vitiligo can be caused and intensified by stress and dissatisfaction. Ensure that your cat’s needs are being met if its nose suddenly turns white.

Many cats love the sun and will bask in UV rays for hours. Eventually, a cat’s nose can burn, which will deepen the color, and the nose leather may begin to blister and peel.

Restrict your cat’s time in the sun during the hottest months. Light nose pigmentation burns faster than darker colors, and more importantly, prolonged sun damage to a cat’s nose can lead to skin cancer.

Don’t put sunscreen on a cat’s nose to offer protection, as many suntan lotions contain salicylates, which are a byproduct of aspirin. As per Veterinary and Human Toxicology, aspirin is toxic to felines.

Hyperadrenocorticism (Cushing’s disease) is a problem with the adrenal glands.

A cat with hyperadrenocorticism will generate an excess of cortisol (the stress hormone). Often, this condition begins as a tumor in the pituitary gland.

Cushing’s disease is rare in cats but can occur. Overweight, senior female cats are most at risk, especially if they also have diabetes. Hyperpigmentation is considered to be one of the first warnings.

The Journal of the American Veterinary Association mentions the following signs:

There’s no cure for hyperadrenocorticism, but a vet may surgically remove the cat’s pituitary gland. Alternatively, the condition will be managed with medication.

Your cat’s nose won’t remain the same color over the entire course of its life. A cat’s nose leather will lighten and darken for various reasons, but sudden changes to the shade or texture should be checked by a veterinarian.