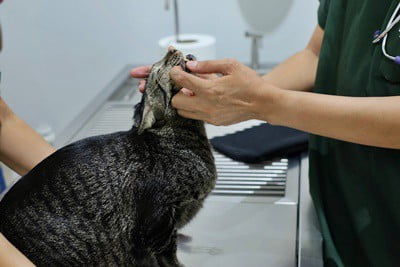 Have your cat’s gums turned black, or were they always dark? Black cats, in particular, often have black or dark-colored gums, but this is only a concern if the color of the gums has changed suddenly.

Cats usually have black or freckled gums due to lentigo simplex, which is a benign condition associated with older, orange felines. Darkening gums could have occurred due to gum disease. Also, your cat’s gums could have been stained by food, liquid, or blood.

If your cat’s gums have changed color all of a sudden, this is more concerning. Some cats naturally have black gums for their entire lives, which is perfectly normal.

What Does It Mean When a Cat’s Gums Are Black?

If your cat has orange fur, black gums are rarely a concern. As discussed, orange cats are prone to lentigo simplex, and the black color on your cat’s gums is just freckles.

For other colors of cats, black gums merit further investigation. Be alert if your cat’s gums are yellow or blue, as this suggests possible issues with the liver or a lack of oxygen.

Tooth and gum disease will leave your cat in pain, refusing to eat and drink.

Lentigo simplex is an inherited condition that causes black spots and freckles to appear on the cat’s gums. The freckles are known as lentigines, the plural for lentigo.

These spots can also appear on and around a cat’s nose and lips. Combined with black gums, these signs are usually sufficient to self-diagnose lentigo simplex.

Your cat doesn’t need to have pure orange hair to be affected. Tortoiseshell and calico cats are just as likely to exhibit these symptoms, and cream or silver-colored cats may have this harmless condition.

Cats of these colors are more affected than others due to melanocytes, which are cells that provide a cat’s fur with pigmentation. Orange fur has a slightly less stable genetic code than more binary shades, which means that the melanocyte periodically returns to a default shade of black.

There’s no way to prevent lentigo simplex, but it’s not aggravated by sunlight or other external factors. If your cat carries the genes, it’ll develop black freckles. This usually happens later in life, so you may notice it more as your cat advances in years.

The freckles aren’t cancerous and won’t itch or cause pain. All the same, it’s recommended that you take the time to learn the difference between lentigo simplex and cancerous bumps.

If the freckles are raised, and your cat’s in distress, they could be cancerous.

Staining of the Gums

Your cat’s gums may be temporarily stained. While this isn’t a long-term issue, neither is it something that can be ignored. Whatever’s causing the staining will attract bacteria, leading to gum disease.

Consider if the staining has been caused by food. This is rare, as quality cat food isn’t black. Dry food can form a paste in the roof of the mouth, but, again, this is rarely black.

If the staining doesn’t relate to your cat’s food, check for signs of toxicity. For example, your cat may have lapped at engine oil from a garage floor.

Symptoms of toxicity include:

Consider if your cat drank stagnant or muddy water. Cats prefer to hydrate from a natural resource, so your cat may have drunk dirty water from a plant pot or puddle outside.

This leaves your cat at risk of infections, including:

If your cat has stained gums, brush your cat’s teeth and clean its mouth.

If you need to clean a cat’s mouth, you’ll need the following:

You’ll need to keep the cat still while you brush its teeth and gums. Most cats will loathe the experience, so wear gloves for your own protection. Once you’re done, encourage the cat to drink water.

Bleeding in the Mouth

If your cat is bleeding inside the mouth, it may have experienced head trauma.

Cats prefer to hide signs of injury, so you may not know about it. The blood will have dried and congealed, lending itself to the black appearance.

Check your cat for signs of external bleeding. If you can’t find any, observe your cat’s behavior.

Any of the following symptoms are warning signs of a head injury:

Take your cat for x-rays and scans to assess the extent of any damage. If you find no signs of a head injury, consider medical explanations for bleeding in the mouth.

These can include the following:

Gum disease (periodontal disease) is an issue that almost any cat aged 3+ will face at some point.

Gum disease can be kept at bay by regularly brushing your cat’s teeth. A cat with gum disease will display the following symptoms:

Of course, the cat’s gums may also turn black due to a combination of dried blood from the gums and spreading tartar.

Periodontal disease starts with gingivitis. If you capture this early enough, the problem can be resolved. Left untreated, your cat risks developing stomatitis, an inflammation of the gums.

If your cat isn’t treated at this stage, periodontal disease becomes inevitable.

Gingivitis is the first stage of periodontal disease. It usually stems from poor oral healthcare, although it’s sometimes brought on by infections or stress.

Food can become trapped between or below the teeth when your cat eats. Here, the food will slowly dissolve. Unfortunately, it feeds bacteria that live within your cat’s mouth, forming plaque on the teeth.

The Australian Veterinary Journal suggests that soft food can cause gingivitis. Giving your cat food to sink its teeth into will clean its mouth; soft food is more likely to slip into gaps in the teeth.

Plaque starts colorless and can be difficult to detect. Over time, as the plaque spreads, it will darken. The plaque will eventually harden into tartar, separating the teeth from the gums and making the gums appear black.

Gingivitis is reversible if captured. Unfortunately, the side effects associated with gingivitis are rarely evident. Your cat will not display symptoms of periodontal disease until the condition has progressed.

To combat gingivitis, brush your cat’s teeth several times per week. If brushing isn’t an option, take your cat for periodic professional cleaning.

This will involve placing your cat under a mild anesthetic and scraping away any tartar. This can reverse the onset of gingivitis. However, an older cat may be considered too high-risk for anesthesia.

If gingivitis is left untreated, a cat can develop stomatitis. Due to the connection to the previous condition, this is referred to as gingivostomatitis.

A cat with stomatitis will display more symptoms than gingivitis because it causes swelling and inflammation around the mouth.

A cat that normally has a healthy appetite will refuse to eat and is unlikely to groom itself. It may also become belligerent and aggressive, especially if touched around the mouth.

Stomatitis can still be reversed before it leads to periodontal disease. The mouth must be cleaned thoroughly, and your cat prescribed antibiotics to reduce the swelling.

Once periodontal disease takes hold, it unfolds over 3 stages.

Even mild periodontal disease cannot be reversed, but the pain and symptoms can be managed. In some cases, this will prevent the disease from advancing.

If your cat has mild periodontal disease, the condition has spread from the gums to the teeth.

At this stage, the damage to the teeth is irreversible. Senior cats may lose teeth, as the structural integrity was already weak. Your cat’s mouth must be cleaned to prevent the condition from worsening.

When a cat has moderate periodontal disease, its health is in danger. The gums will be black, and the teeth separated from the gums. By this stage, your cat will be in significant pain.

The bacteria will move into the cat’s bloodstream, causing a range of issues. Dental surgery is essential, even in senior cats. If the periodontal disease is not halted, the cat will become more ill.

Your cat will likely require root canal surgery for the infected teeth. If this isn’t an option, the teeth will need to be extracted.

Severe periodontal disease is a medical emergency. Your cat’s teeth are at risk of dropping out naturally, and bacteria will affect the bones.

The cat’s gums will be pure black, bleeding or releasing pus. Chewing will be extremely painful. Unless your cat is treated with laser surgery, its teeth will need to be removed.

If your cat is acting normally and eating its food, it’s likely to be doing fine. It probably has vertigo simplex. If your cat shows signs of pain and the freckles/bumps are raised, book in with a vet for further checks. It may need emergency medical treatment or a professional teeth-cleaning session.