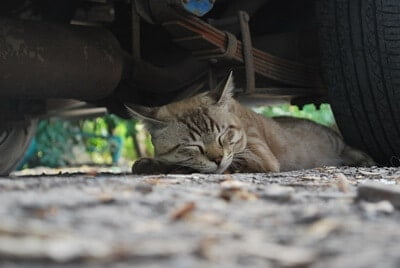 A cat getting run over is a sadly common occurrence. It’s a distressing and traumatizing event that many cat owners have lived through. Either through discovering that their cat was hit by a car when they find the body or by accidentally running over their cat themselves. Prevention is the best way to stop this terrible event from happening.

Being hit by a car is one of the main dangers of allowing your cat to roam freely outdoors. There are ways to minimize risk. All cats should be neutered, but male cats especially. Unneutered male cats have far larger territories than neutered ones, and they will patrol this territory constantly. You can also get in a reflective collar. This acts like the cat version of a high-visibility jacket, allowing drivers at dusk and night to more easily see your cat crossing the road. Keeping your cat indoors at night also lowers its risk of being run over.

There is a way to prevent your cat from being run over while also allowing it outside to a degree. This is done by creating a secure outdoor cat enclosure. These offer the cat and yourself the best of both worlds. The cat is allowed the enriching experience of being outside while also being kept safe. You can also harness and leash train your cat and take it for walks.

Table of Contents show
1 Do Cats Know to Avoid Cars?
1.1 Do Cats Have Road Awareness?
1.2 Other Car Incidents Involving Cats
1.3 Can Cats Survive from Being Run Over?
1.4 Minimize The Risk of a Cat Being Hit By A Car
1.4.1 Neutering
1.4.2 Reflective Collars
1.4.3 Outdoor And Indoor Schedules
1.4.4 Secure Outdoor Enclosures
1.4.5 Harness Training
1.5 Can You Train Cats to Stay Away from Roads?
1.5.1 Do Cats Need To Be Outside?

Do Cats Know to Avoid Cars?

The Canadian Veterinary Journal reports that 39.2% of cats that died unexpectedly did so due to trauma. Motor vehicle accidents were attributed to 87.09% of these trauma-related deaths. Most cats seem to, instinctually, avoid moving cars. However, these statistics prove that cats are commonly killed by cars regardless of that.

So, the answer to ‘do cats know to avoid cars’ is more complicated than it seems. The answer also depends on where you (and your cat) live, that cat’s lived experiences, and its natural constitution. A cat accustomed to cars is less likely to avoid them. Thus, putting itself more at risk. There is a distinction to be made here as well. Moving cars and stationary cars pose two different scenarios to a cat.

A parked car offers shelter and safety from the elements, strangers, and other animals. A moving car is another entity to a cat. It’s loud, spewing unpleasant fumes, and often moves fast. A cat may also consider your car different as well. Your scent lingers on it, and the cat may have seen you interact with it. The cat may make the association that this car belongs to you. A cat may be less cautious around a car perceived as your territory.

In general, cats will avoid loud noises and unpleasant smells. A cat may avoid moving cars for this reason. This is no guarantee, as many will know from personal experience. Several incidents of cats being hit by a car state that the cat ran in front of the car, seemingly from nowhere. A common story concerning other animals, like deer and squirrels. The reason for this is usually either the animal:

Animals, like cats, that are fast and agile will commonly allow a predator (or car) to approach them. Then, at the very last moment, it will run across its path. A predator would lag behind the agile cat, allowing it to escape. A car moves too fast, and this avoidance tactic actually puts the cat directly in harm’s way. When startled, the cat may also backtrack across the road rather than continue to the other side. This is because the cat thinks the path behind it is safer than the path before.

Do Cats Have Road Awareness?

Cats don’t have 9 lives, and they don’t have road sense. Not like we do. Cars are noisy, smelly, and large. Naturally, these three elements are a deterrent to a cat. Cats are predators, but they are still small and have many predators themselves. As such, a cat remains alert almost constantly for threats. In part, this instinct does incline cats to avoid roads. Not always, however.

A cat that has lived most of its life near a busy road may have been accustomed to cars. The noise of an oncoming engine may not inspire fear or wariness. As such, this cat might take less caution when crossing roads or sitting in driveways.

Young cats, too, may not have learned road caution either. The Journal of Small Animal Practice found that of 128 cats hit by a car, half were between 7 months and 2 years old.

Being hit by a moving car isn’t the only way a cat can be hurt by a car. In colder weather, especially during days with frost or snow, cats like to take refuge in small, insulated spaces. Namely, and as many owners have sadly discovered, this could be under the car. Even in the engine or on top of the wheels. When the car is started, the cat may be injured in various unpleasant and potentially fatal ways.

The same can also happen with cats seeking refuge from hot weather or threats under a car. Cats cannot full-body sweat to cool down. During hot weather, a cat will seek out a shaded, cool spot. This might be under a car. These car-cat accidents, sadly, are often unknowing owners running over their own cat.

To avoid this, either identify where your cat is before starting the car or bang on the hood and check the under-carriage.

Can Cats Survive from Being Run Over?

Depending on the severity of the injury and how quickly treatment is sought, a cat may survive being hit by a car. This depends on a variety of factors, including:

A cat that gets run over suffers widespread internal trauma that can kill it instantly or in a matter of minutes. A cat that gets clipped and goes over the car may suffer fractured bones, but with treatment, it could survive. Every case is different.

Minimize The Risk of a Cat Being Hit By A Car

You can take some steps to minimize your cat’s risk of being hit by a car. If you choose to allow your cat to free roam, put these in place.

Vet Record states that male cats are more likely to engage in risk behaviors. This is due to unneutered male cats having far larger territories. These territories need to be patrolled, marked, and defended. A male cat may wander off for days at a time, especially during mating season. This is why neutering a male cat can lower the risk of being hit by a car.

Female cats ranges may not be affected by being neutered. It is, however, still important to neuter it. It is a key step in preventing unwanted breeding and stray cat populations.

Reflective collars allow other drivers to be more aware of your cat at night or during dawn and dusk. It makes your cat more noticeable when you are coming home from work too. Some cats can recognize their owner’s car. It will run to greet you, and a reflective collar reduces the risk of you running over it.

Cats are nocturnal. A cat is more likely to wander at night. It may also wander further from home than it would during the day.

A cat is more likely to be hit by a car at night and dusk. The light conditions during these hours of the day make it more difficult for drivers to notice small hazards, like cats. As said above, a high-visibility collar can help. However, restricting what hours your cat is allowed outdoors can greatly reduce its risk as well.

Keeping the cat indoors during dusk and night can prevent it from being run over. It is also a good idea to keep it indoors during weather that reduces visibility, such as fog or rain.

A common practice being adopted by many is to create a secure outdoor enclosure. This is an enclosure that allows the cat to be outside without the risk it would normally have.

An enclosure could be a pop-up enclosure. These can be set up and broken down at will. Another type of enclosure is to enclose a porch or balcony in bird netting. Or to use the same material (or a stiff, wired version) to create a permanent enclosure attached to the house. The cat can move from the house to the enclosure as it wills, perhaps through a cat door or permanently open window.

These enclosures offer a huge amount of enrichment for a cat. They also keep them safe from all of the risks associated with letting a cat roam outdoors. This includes cars, poisons, toxic foods, and other animals and the associated risks. They also prevent a cat from getting lost or being stolen.

Just make sure that it is secure! Cats are crafty and able to exploit the smallest gap, as many of you will know.

It’s not just dogs that you can take for a walk. Many are enjoying taking their cats for a walk using cat harnesses. These allow you to safely walk your cat. This offers mental and physical enrichment for it and keeps it safe.

Not every cat will accept harnesses. Usually, harness-training a cat needs to happen when it is young. This allows the cat to accept the harness and adapt well to leash training.

Walking a cat isn’t quite the same as walking a dog. A dog won’t try to climb a tree. Harness training a cat can also be quite useful for those that travel with their pet.

Can You Train Cats to Stay Away from Roads?

You can train a cat. But, training a cat to stay away from roads? Certainly not as easy as litter training a cat. And, actually, not considered possible by many. One person suggested using a spray bottle to dissuade a cat from going too close to a road. Even then, they were unsure of how effective this method would be.

With enough persistence, a cat may be trained to recognize the boundaries of your property. This can be done through a combination of:

A cat also likes to learn from its owner. If you show the cat to be afraid of cars, it may adopt a similar attitude. This is not a guarantee, but it can work.

Do Cats Need To Be Outside?

The only way to completely prevent a cat from being hit by a car is to keep it indoors and not allow it to enter the garage. Compendium states that the American Veterinary Medical Association urges cat owners in urban and suburban areas to keep their cats indoors. Stats reflect the benefits of this. On average, outdoor cats live 2-5 years, whereas indoor cats live between 17-20 years.

Also, as noted by The Veterinary Record, indoor-only cats rarely suffer physical injuries or get fleas and the associated flea-bite allergies. Some might be concerned that they would be depriving their cat of a fulfilling life by keeping it indoors. With proper enrichment, a cat will have a rich and fulfilling life indoors.

Preventing your cat from being hit by a car involves a few preventative measures beyond making it an indoor-only cat. This will not eliminate the risk of being hit by a car. They will lower the risk. These measures involve getting the cat a reflective collar, restricting what hours it can roam outside, and neutering it. You can also get an outdoor enclosure for a best of both worlds scenario. These allow the cat the enrichment of outdoor space while keeping it safe from getting run over.