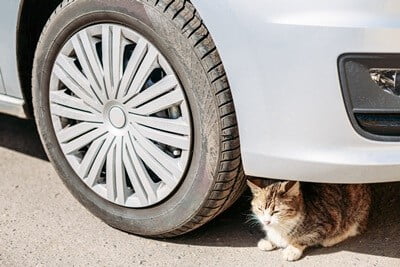 Cats often seek solace from their daily concerns, such as rainy weather and dogs. So, if your cat roams outdoors, it may sleep or hide underneath a car. This will be a warm and safe place in the cat’s mind. Unfortunately, it can also be a dangerous place, so you need to tempt your cat out before it gets run over.

Get your cat out from under the car into a cat carrier by tempting it with treats and enticing smells. If ineffective, appeal to your cat’s hunting instincts. For example, draw the cat into the carrier using toys. If the cat is stubborn, you should physically shepherd it out. As a last resort, scare the cat so that it bolts into the carrier.

Drawing a cat out of hiding under a car requires a patient and a tactile approach. So, ensure that the cat feels that it’s exchanging one safe, comfortable place for another. If the situation is handled with delicacy, a cat will willingly leave its hiding place underneath a car for a more favorable situation.

Why Do Cats Hide Under Cars?

Cats seek shelter under cars, especially when it’s cold and rainy outside. The space underneath a car will be tight, warm, and protected. You will also find that some cats escape the excessive warmth of the sun by hiding under cars.

The smell of the car may also be appealing. Cats are natural explorers, and a car’s tires will carry the scent of unclaimed territory. This will pique a cat’s curiosity and inspire it to learn more about new areas.

Of course, there are significant dangers involved. For a start, not all drivers check under their car before starting an engine in the morning. Even if a collision with the car’s tires is avoided, there are other risks:

This means that a cat should be coaxed out from under a car. While it is true that the cat will grow hungry eventually, cats can be stubborn. It could be hours or even days before the cat leaves its hiding place.

Getting a Cat from Underneath a Car

You’ll need a cat trap that is warm, secure, and enticing to the senses. The best cat trap you can use is a pet carrier. Pad the carrier with blankets, and spray a familiar scent inside the carrier. If your cat has a blanket, put that inside.

Place your carrier as close as possible to the car. One of the main appeals of hiding under a car is that it’s a source of protection. Your cat can only just squeeze under the car, so a larger predator will not be able to reach them. Leaving this security for wide, open space is unappealing to cats.

Attempt to capture your cat after dark, whenever possible, as the roads will likely be quieter at this time. In addition, cats prefer to move undetected, and darkness offers a measure of protection.

Your first approach should always be to tempt a cat out of hiding. The cat will not feel threatened, and you will not be attacked. Food and scent are the most effective ways to lure a cat out of its hiding place.

Cats are food-focused. As mentioned, it is best to tempt a cat out of hiding after dark. This suggests that your cat missed dinner, which will often be enough for a cat to be guided by its stomach.

Prepare your cat’s favorite meal. Make it especially tasty by drizzling a strong-smelling flavoring over the meal. Tuna juice and meaty gravy are recommended. Ensure the food is at an appropriate temperature and put it in the carrier.

At this point, walk away. Cats are smart. No matter how hungry it is, a cat will never willingly walk into a trap. If the cat sees or smells you nearby, it will know what you are doing.

You could also create a trail of treats into the carrier. However, you need enough food to tempt the cat, but not too much. If treats sate the cat’s appetite, it will have no desire to eat the food that’s inside the pet carrier. Move a safe distance away and be patient. Your cat may not succumb to temptation for hours.

When your cat eventually succumbs to its hunger, leave it to start eating but close the carrier quickly. If you are too slow, the cat will return to its place under the car. It has a full stomach and a warm, quiet place to sleep off its meal. In a cat’s mind, life doesn’t get much better.

You could try tempting your cat with a favored scent, such as catnip. If your cat loves this herb, it may find the scent irresistible. Other scents that cats frequently enjoy include:

Just be aware, there will also be a strong odor under the car. The engine, tires, and surrounding streets will all carry aromas. A cat’s nose can tell these scents apart, but unfamiliarity could make local smells more enticing.

If your cat is untempted by food or scent, try toys and entertainment. If your cat has a high prey drive, it will not be able to resist hunting.

This should be a toy that your cat enjoys, such as a fishing rod or a wind-up mouse. Try a new toy if an old favorite isn’t working. According to Applied Animal Behavior Science, cats can grow bored with familiar toys. Dangle this toy in front of the crate and be prepared to move quickly. As soon as the cat follows the toy into the trap, close it up.

If this does not work, allow your cat to hunt you. Walk in front of the car a few times, then back away. There is no sport in hunting when you’re so close. If you walk away, the cat may be tempted into following.

If a cat isn’t tempted by stimulation, you may need to herd it out. You must make the cat feel like it is choosing to move of its own volition. If the cat feels it is being shepherded, instinctive stubbornness will kick in.

Never reach in and grab a cat by the paws to drag it out. You will be clawed and bitten before the cat retreats out of reach. If you do grab the cat, you risk causing it injury.

Don’t attempt to crawl under the car yourself as you are putting yourself in danger. In addition, this will frighten the cat as you will be invading its safe space.

Start by creating a path for your cat to move into the carrier—slide two pieces of wood, or another material, under the car. If your cat can go nowhere else, it will grow bored and emerge or walk into the carrier.

If this doesn’t work, gently slide the wood in various locations. Do not prod and poke your cat directly. If it notices a slow-moving intruder, the cat may move of its own accord.

Frightening your cat out of its hiding place should always be a last resort. This is a risky approach as the cat may already be hiding because it’s feeling nervous and anxious.

Even if your cat is healthy, scare tactics are rarely effective. See things from your cat’s perspective. You are a much larger animal and can sweep the cat off its paws or cause harm with ease.

Preparing to Scare a Cat Out of Hiding

According to Progress in Brain Research, a frightened cat’s fight-or-flight reflex will be activated. You can expect your cat to bolt within a second or two of being scared.

If your cat flees in the wrong direction, it will not stop running until it feels safe. Depending on how spooked the cat is, this could be some distance from your home. That is assuming the cat does not race headlong into oncoming traffic.

Cover every exit point from the car except for your cat trap. Ideally, block these with solid objects. If this is not an option, seek help and assistance. Ask people to act as sentries to prevent the cat from escaping.

How to Scare a Cat Out of Hiding

You could use noise or the sudden appearance of an object. You may recall the “cats vs. cucumbers” social video craze. Videos of cats jumping out of their skin upon seeing a cucumber briefly became popular.

In these instances, it was not the cucumber itself that frightened the cat but its sudden appearance. The same will apply if a cat sees anything unexpected through its peripheral vision.

Sneak to the other side of the car and place something besides the cat. This could be a cucumber, a balloon, an unfamiliar stuffed toy, or anything large and colorful. All being well, the cat will run into the trap.

Loud, sudden noises are among a cat’s biggest stressors. Be mindful of this impact before making noise to scare your cat. If you decide to do so, set up a one-way exit and make a sudden noise. You could use any of the following:

You could also climb into the car and blast the horn. The key is to find an unfamiliar noise that will provoke a fear response. Remember that cats have excellent hearing. This could be deafening for your cat, causing further distress.