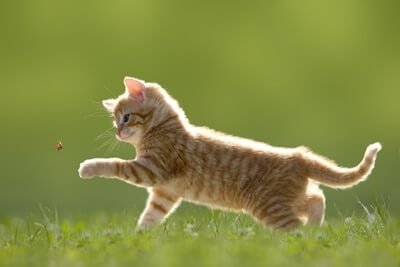 Cats eat all manner of bugs and insects when they’re outdoors, including ladybugs. As insects form part of the feline diet, are ladybugs safe for cats to eat?

No, ladybugs aren’t good for cats. Most species bite and have a bitter taste that cats dislike, while others secrete a toxic substance when in danger. If your cat attempts to eat a ladybug, it’s likely to experience gastrointestinal irritation. However, ladybugs aren’t poisonous and won’t kill cats.

It’s impossible to keep track of everything that your cat eats, especially when it’s outdoors. However, if you see your cat showing interest in ladybugs, you should deter your cat from eating them.

Cats commonly eat insects, especially feral cats that hunt for food. Bugs make up around 1/3 of a cat’s diet, so they’re an essential source of sustenance and nutrition for wild cats.

Hungry cats hunt live insects to sate their hunger and improve their hunting skills. Cats with strong predatory instincts can’t resist chasing anything small that moves, including ladybugs they see wiggling about in the grass. Some cats, but not all, eat their insect prey as a reward.

As stated, a ladybug tastes bitter and unpleasant. Animal Direct explains that many cats play with their prey either before, after, or instead of killing it.

Because ladybugs don’t taste nice, it’s more likely that cats hunt ladybugs for fun. Cats may eat a ladybug once to experience the taste, but they’ll rarely make the same mistake twice.

However, many cats are put off entirely by the bright colors of ladybugs. As described in Scientific Reports, many creatures have bright colors that warn predators of their defense mechanisms.

The brightest colored ladybugs are often the most toxic, so cats will leave them alone.

Are Ladybugs Bad For Cats?

If you’re wondering, “are ladybugs toxic to cats?” the answer depends on the type of ladybug. Domestic ladybugs are usually harmless, but other species are more harmful to cats.

Scientific Reports found that the most toxic ladybug species (from most to least) are as follows:

Asian ladybugs have a particularly nasty bite and cause issues for cats who attempt to eat them. This ladybug species can cause the following health issues:

Most ladybug species, including the Asian ladybug (Harmonia axyridis), cause chemical burns inside the mouth. Science Daily stated that they secrete a fluid from their hemolymph when attacked.

This fluid contains microsporidia, which are tiny fungus-like protozoa parasitic body cells. Ladybugs are resistant to these parasites, so they’re used as an effective defense mechanism, burning any creature that comes into contact with it.

As the fluid is secreted reactively once the ladybug is in danger, it’s most likely to affect a cat’s mouth just before its death, causing ulcers and oral irritation.

Also, this fluid causes ladybugs to stick to the roof of your cat’s mouth instead of being swallowed.

If your cat ingests the fluid a ladybug secretes, its gastrointestinal system will likely become irritated by the toxins.

Similarly, when consumed in large quantities, ladybugs can cause stomach upset or ulceration due to the level of toxins in the body.

In the worse cases, your cat may display the following signs:

While the fluid isn’t toxic or poisonous, it can make your cat unwell for days. It may also put the cat off its food, causing weight loss.

The problem usually sorts itself out when the cat eliminates the toxin from the body.

Ladybugs have tough exoskeletons, which acts as their spine. As a result, it’s not just the secretion that causes mouth and gastrointestinal problems, but the hard outer shell can cause irritation if chewed.

When crunching through the hard outer shell, sharp pieces break off, cutting the cat’s mouth in the process. When bacteria enter the wound, they cause painful ulcers, making it difficult for cats to eat.

Ladybug consumption increases the risk of cats coming into contact with harmful pesticides.

This chance is increased if cats hunt in public grassy areas, like parks and farms treated with mosquito sprays and other insecticides.

If a cat consumes a ladybug contaminated with pesticides, it’ll display these symptoms:

Chemicals are more harmful than ladybugs, so resist the urge to treat your lawn or yard with pesticides.

Similarly, some ladybug species can fend off harmful pathogens due to their robust immune systems. Once exposed to chemicals, they release antibacterial peptides that reduce the effects.

As a result, Proceedings of the Royal Society Biological Sciences explains that if you use pesticides against some ladybugs, such as the Asian ladybug, their resistance against pathogens may render the chemicals ineffective, posing a threat to your cat.

Are Ladybugs Good For Cats?

As established, ladybugs cause problems for cats if they’re eaten. While domestic ladybugs aren’t anything to worry about, it’s impossible to know what species your cat’s hunting.

It’s also difficult to stop them if they eat ladybugs away from the home when they’re out at night.

There are few health benefits associated with ladybug consumption. However, that doesn’t mean they’re all bad, as they offer your cat the following benefits:

While many owners don’t like their cats to hunt, it stimulates their senses and sharpens their minds, especially when cat owners are out during the day.

Some insects are a good source of minerals and vitamins.

While there are few studies into the nutritional benefits of ladybugs, they have exoskeletons made out of protein, meaning they possess a small amount of protein that could benefit cats.

While cats would need to consume lots of ladybugs to get the protein they need, protein gives them energy and helps the body’s tissues, organs, skin, hair, tendons, blood, and muscle grow healthy.

Are Cats Allergic To Ladybugs?

It’s not common for cats to be allergic to ladybugs, but it’s not possible.

There’s a link between human allergies and ladybugs, particularly after they’ve entered the home. They trigger respiratory problems and cause an itchy sensation.

The problem is that cat allergy signs are similar to the irritation caused by eating ladybugs. If your cat displays allergy symptoms after eating a ladybug, it’s more likely that the toxic fluid is upsetting its mouth and gastrointestinal tract.

Cats with allergies display the following signs and symptoms:

How To Prevent Your Cat From Eating Ladybugs

Once a ladybug is in your cat’s mouth, it’s usually too late to prevent them from swallowing the bug. Similarly, the ladybug will have already secreted the harmful fluid.

When it gets colder, ladybugs may head indoors, seeking refuge in the home. So, follow these steps to prevent your cat from eating ladybugs:

If you have a ladybug infestation, sprinkle diatomaceous earth where they’re most likely to hide. This non-toxic powder kills unwanted pests by scratching their exoskeletons and absorbing the ladybug’s essential fluids and oils, causing them to dehydrate and die. It’s also safe for use around animals.

Asian ladybugs are one of the worst kinds for cats to eat because they cause oral burns.

Unfortunately, they’re considered a pest and commonly enter buildings and homes. You can tell when they’re inside your home because they leave yellow stains and produce a nasty odor.

Their color ranges from orange to red and tends to have black spots on the wings.

As the name suggests, black ladybugs (pine ladybugs) are black with small red spots. Cats are more drawn to black ladybugs than red ones because black isn’t a classic warning sign.

Black ladybugs live in trees and shrubs, hiding in leaf litter and foliage. Thankfully, their appearance is distinctive, so you’ll be able to identify them immediately.

Don’t encourage your cat to eat ladybugs. While your cats must be mentally stimulated, it’s better to play with them using their favorite toys than allowing them to chase after harmful bugs.