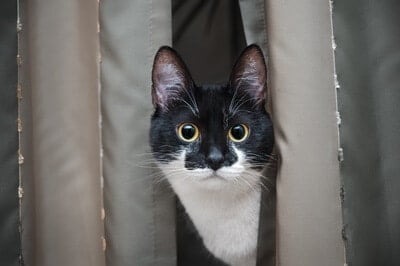 Cats can see in color, but their world is not as rich and vibrant as humans. Extremely near-sighted, cats view the world in a somewhat foggy haze and can only see a minimal amount of color. The color vision of a cat is similar to someone who is color blind.

The retina defines a cat’s view of the world. The properties involved, such as cones and rods, allow humans to see clear and rich colors while struggling to see in darkness are reversed for a cat. This is why cats can see so well in pitch black, wooded areas.

Felines also have a different visual field compared to humans. This allows cats to see in greater detail when they really focus on a specific object. Due to their eye placement, cats can see an additional 20 degrees.

Table of Contents show
1 What Colors Do Cats See?
1.1 Are Cats Color Blind?
1.2 Cat Vision vs. Human Vision Compared
1.2.1 Why Are Cats Unable to See True Colors?
1.2.2 Understanding the Visual Field
1.2.3 Do Cats Have Blurry Vision?
1.2.4 What Colors are Cats Attracted to the Most?
1.2.5 Cats Thrive in Dark Conditions
1.3 What Do Cats See When They Look at Humans?
1.4 Is Color Important to Cats?
1.4.1 Can Colors Cause Behavioral Issues?

What Colors Do Cats See?

Cats can see blues and greens really well. Other colors, most notably reds and pinks, are distorted.

Hard-to-see colors may appear green, while a deep purple may look like a different shade of blue. For these reasons, cats are said to have the color vision of a human who is color blind.

To understand why cats are unable to see true colors, we need to look at the areas of cats’ eyes. The difference between the human retina and that of a cat is the core reason why cats don’t share our field of color.

The retina is comprised of two different cell types: rods and cones. The ability to see rich colors is determined by the cones.

Both humans and cats have 3 different types of cones that can identify green, blue, and red.

Because humans are equipped with over 10 times the number of cones as cats, humans can see a seemingly endless amount of colors.

However, cats have more rods than humans. Able to detect various light and motion levels, cats can see in dark areas far better than people. Humans have an enhanced color wheel, while cats have supreme night vision.

According to the Journal of Neurophysiology, cats are color blind. The color vision field of cats looks rather washed out with only hints of color. The field is certainly not black and white, though.

As a cat’s color field lacks the richness of hues and saturations, their world is a colorful blur. To a human, this would be defined as a fog or a haze. The color vision field of a cat is distorted, and it certainly lacks the “awe” factor that most humans enjoy.

Although most of the differences are not as extreme as you may think, these differences change the entire picture of what cats and humans see.

Visual differences go far beyond colors. Humans can see the finer details of a human face or a street sign from 50 feet away. However, your cat is at a disadvantage when attempting to view these things.

Why Are Cats Unable to See True Colors?

Humans have more retinal cone cells. This allows humans to see the world as a vibrant painting while cats cannot see as much detail.

When people speak of true colors, they’re referring to the richness and saturation of a deep blue or vibrant orange. Cats cannot see hues and saturation, and no colors are rich and clearly defined for a cat.

The opposite of true color is faded and washed out. The deeper and more intense color is to humans, the more bland and blurry it can appear to cats.

Cats are unable to lock in on a specific color, so it appears hazy. For example, rich green grass may appear brown or exhibit a mustard color. However, true green grass to humans may look like dead grass to a feline.

Cats have a much wider vision field than humans. While humans can see in much greater detail, cats can see a far wider picture.

The vision field of a human is 180 degrees on average. The same field is 200 degrees for a cat. Both fields include straight ahead, below, side-to-side, and above. The extra 20 degrees is found in the expanded or side-to-side view.

Cats can stalk prey and stay on high alert for their safety by using these extra 20 degrees. This type of visual field can be invaluable to a cat at night or in a heavily wooded area.

Do Cats Have Blurry Vision?

Cats are more near-sighted. Any distance beyond 80-100 feet may as well be miles away for a cat. This is why, when taking in the entire view of a specific vision scope, cats will always deal with blurry images.

Most images are relatively sharp and clear to a cat within 20 feet. However, humans with normal vision can see everything in detail for up to 100 feet.

Have you ever seen your cat just a few houses away and called for it yet received no response? The vision fields and clarity differences are likely to be the explanation. While you can see your cat, there is a high chance that they can’t see you. So, keep the 20 feet rule in mind when calling your cat.

What Colors are Cats Attracted to the Most?

Cats can see shades of blue and green, so logically, they are likely to get their attention. White is also a significant trigger color for felines. Cats view white as a glowing color. This is why cats are often more attracted to balled-up paper rather than a brand new toy.

White is also an aggressive color. If you attempt to hold the cat in your arms to calm its nerves, wearing a white shirt could actually be counterproductive. If you want to set a calming mood for your cat, you should select one of these colors:

The night is when a cat’s vision works optimally. Because cats have more retina rods than humans, they can see in dim and dark environments. It’s estimated that cats can see using only 1/6 of the amount of light a human would require.

What Do Cats See When They Look at Humans?

Cats can tell the differences between other humans, but not the distinct facial features. In other words, cats have no idea of what we look like. Research suggests that cats are only 50% likely to be able to determine the face of their owner from that of a stranger when shown pictures.

However, cats are 90% likely to be able to tell the difference between a familiar and unfamiliar cat when shown different pictures.

The same also holds true for familiar settings shown in pictures. A known outdoor patio can be easily spotted in a picture (roughly 85% of the time) compared to an unfamiliar patio.

In fact, cats can recognize a great many things. Unfortunately, the detail of a human face is not one of them. Cats recognize humans in 3 ways:

Is Color Important to Cats?

Vivid colors are less important to cats. While it may seem sad that cats can’t enjoy the world as we see it, what they do see is perfect for their needs.

Eating, sleeping, and stalking are the routine daily life of felines. To humans, it makes a big difference if your shirt is black or red. People live in a world where seeing colors is crucial, but this is irrelevant to cats.

Can Colors Cause Behavioral Issues?

Although cats don’t need to see color in the same way humans do, our colorful world can cause cats to act strangely at times. Because our world is often a flood of color, cats can react harshly to what they struggle to see.

Have you ever seen your cat (when indoors) stare into the distance? Have you observed your cat visually lock in on something with odd intensity? Both cases could be an example of a color rush.

Additionally, intense colors may lead your cat to think that a predator is nearby. Through the eyes of a cat, the blur of too many undefined colors can cause behavioral problems.

Cats are obsessed with movement. This is why games, such as follow the finger, will never grow old to them. If movement is working in tandem with colors, your cat can become overwhelmed. In extreme cases, your cat may “attack” the undefined flash of color.

Although cats don’t need to be able to see in color, they are naturally very curious. Listed below are color items that cats may be fearful of:

They may present color differences and mimic the size of small creatures. If your cat were to come across any of these items, it could become afraid. However, it may just be that your cat is fearful because it’s been caught off-guard.

While the visual field of a cat can be dim, blurry, and lacking in sharp clarity, it’s not a major departure from humans’ visual field, and it’s certainly not a mere black and white.