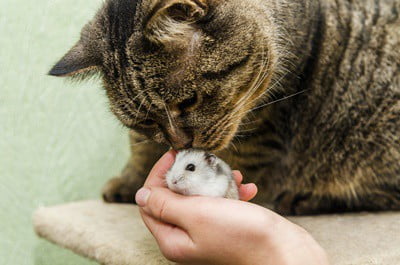 Keeping a cat and a hamster in the same home isn’t always easy. After all, these two animals are natural enemies, and the chances of your hamster surviving an attack from a cat are very low. Moreover, hamsters fear cats, so they’re likely to become stressed at the mere sight of one.

Despite all that, cats and hamsters can live in the same house as long as you keep them separated. Cats and hamsters don’t get along because hamsters are rodents, which cats instinctively hunt, torment, and kill. When introducing the two pets, ensure that the cat realizes the hamster’s off-limits.

Tell the cat off for any bad behavior and reward them for ignoring the hamster. When you’re not around, the hamster should be kept in a secure cage in a different room from the cat.

Table of Contents show
1 Can Cats And Hamsters Be Friends?
1.1 Can Hamsters And Cats Coexist?
1.2 Are Hamsters Good With Cats?
2 Can Hamsters And Cats Live In The Same House?
2.1 Are Hamsters Scared Of Cats?
2.2 Do Cats Want To Eat Hamsters?
3 How To Introduce Cats To Hamsters
3.1 Settle in The Hamster
3.2 Observe Your Cat Demeanor
3.3 Feline Training Process
4 How To Keep Cats Away From Hamsters
4.1 Secure Hamster Cage
4.2 Separate Rooms

Can Cats And Hamsters Be Friends?

Cats and hamsters can never be friends because hamsters are rodents, which are the natural prey of cats. Even a docile and well-behaved cat will attack a hamster when given the opportunity.

According to Ecology And Evolution, cats are the natural predators of birds, invertebrates, and small mammals. It doesn’t understand that it’s your new pet; it believes the rodent is there to hunt.

Even if your cat doesn’t attack the hamster immediately, it may do so later. Once it’s unsupervised or feels the time is right to stalk this new prey, it will almost certainly pursue it.

Unfortunately, this means that you can’t ever trust the cat around your hamster.

Can Hamsters And Cats Coexist?

Although cats and hamsters will never be best friends, they can co-exist in the same house, but only after you’ve taken certain precautions.

Much will depend on the following factors:

For example, some cats are more relaxed and will be disinterested in attacking your hamster. Other cats are curious and may antagonize the hamster just for fun.

Most of all, you shouldn’t allow the cat and hamster to roam freely with each other. If one is out of its cage, the other should be in its cage or another room. If both animals are out together, you should have a second person holding or monitoring the cat while carrying the hamster.

There should be a reasonable distance between the two animals, and they must be supervised. In this context, co-existing is best described as ignoring each other’s existence.

There will never be a time when your hamster can safely play with the cat or vice versa. This isn’t only because one is a natural food source for the other, but also because:

Hamsters gain nothing and risk everything by interacting with a cat.

Are Hamsters Good With Cats?

It’s rare to find a hamster starting a confrontation with any animal. However, this doesn’t mean that hamsters are willing to be friends with cats. Most will fear any animal that is larger than them.

Some hamsters raised in captivity don’t immediately recognize cats as predators and may be unable to distinguish between friend and enemy.

While this can make the introduction period less stressful for your hamster, you shouldn’t take it for granted. The hamster doesn’t yet understand the danger.

This lack of fear could put your hamster’s life in danger if you aren’t around to supervise. Instead of running from the cat, it may approach if it escapes its cage, and that will be far more traumatizing than the fear your hamster experiences at a distance.

Whatever the case, don’t let your hamster and cat stay in the same room unsupervised, as it’ll always seek an opportunity to pounce and attack the hamster.

Can Hamsters And Cats Live In The Same House?

It’s possible to keep hamsters and cats in the same house.

Both make lovely pets and can offer companionship in unique ways. Owning one doesn’t mean you’re permanently banned from owning the other. With that said, there are some factors you should keep in mind concerning the instincts of both animals.

No matter how well trained your cat and hamster are, you can’t undo instincts formed over millions of years. Think about the risks of keeping these two pets together, and be sure you’re prepared.

Are Hamsters Scared Of Cats?

Hamsters are naturally scared of cats and other big pets in the home. Hamsters consider animals of greater size to be predators, and they’re usually right.

Even the smell of a cat may upset your hamster. You’ll know it’s scared if it screams or squeaks. Like most rodents, they have tiny hearts, and long-term exposure to stress can be life-threatening.

Do Cats Want To Eat Hamsters?

Depending on the cat, it may attack the hamster to eat it.

Cats rely on a diet of animal proteins and vitamins, and they cannot digest plant matter. They’re also skilled hunters and tend to enjoy the food they’ve caught themselves.

A well-fed cat may still attack a hamster. Many felines hunt for sport and practice, not just a meal. Providing more food can reduce your cat’s chances of hunting the hamster, but it won’t prevent it.

How To Introduce Cats To Hamsters

Keeping your hamster in a cage and never letting it meet the cat is recommended. However, introducing the two animals can slightly reduce the chances of the hamster getting hurt.

Hamsters can escape their cages, or cats may gain access to the room where the hamster is kept. Laying down the ground rules in advance can sometimes prevent future problems.

The success of this strategy depends on the temperament of your cat. Some cats are born hunters that will attack your hamster, and others are more laid back.

Settle in The Hamster

Moving to a new home with new people is stressful for hamsters. Even if it doesn’t fear cats yet, it may react with fear when presented with another significant change.

To improve the chances of your hamster reacting calmly during the introduction, give them time to settle in. Allow the hamster to remain in its cage, in a room separate from the cat, for 3 to 4 weeks.

Observe your cat’s movements to determine if it’s the right time to introduce the cat to the hamster.

If your cat’s relaxed and mellow, it’s less likely to get riled by the sight of a hamster. If it’s anxious, pacing, or currently play-fighting its toys, wait until it’s exhausted and winds down.

Teach your cat that the hamster is a family member by doing the following:

You only need the cat to recognize the hamster, understand its smell, and resist the urge to harm it.

Even after teaching your cat not to attack small pets, never leave them together in the same room unsupervised. Your cat’s natural hunting instinct can be triggered at any time.

How To Keep Cats Away From Hamsters

Here’s how to cat-proof a hamster’s cage:

Position the cage in a room where your cat can’t gain access. This ensures that the cat can’t stare your hamster down, poke at its cage, or frighten it by walking around at night.

A different room means that your hamster can explore outside its cage. Running around on the carpet or exploring a small obstacle course is an excellent bonding activity.

Stay with the hamster at all times and return it to the cage before opening the door.

Cats and hamsters can live in a house together, as long as you take precautions. Cats see hamsters as prey, and this instinct can’t be trained out of them.

However, you can give your hamster a safe cage, its room, and a controlled introduction.