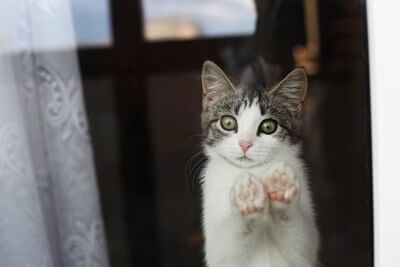 Owners are often curious as to why their cats constantly scratch at windows. The irritating sound generated grates on the nerves. Of course, some cats are more prone to this behavior than others.

Cats scratch at windows when they see birds, mice, and other prey animals outside. They feel frustrated that they can’t pursue their prey. A territorial cat may have glimpsed its own reflection and thought that it was another cat. Some cats want to sharpen their claws on windows, while others find the grating sound soothing.

There are several explanations for cats scratching at windows. Thankfully, cats can be trained out of what can become annoying behavior. Regardless, a cat’s claws won’t cause any lasting damage to the window.

Table of Contents show
1 Why Does My Cat Scratch Glass and Mirrors?
1.1 Cat Has Seen Birds Outside
1.2 Cats Fight Their Own Reflections
1.3 Cats Sharpen Their Claws on Windows
1.4 Relieve Stress and Anxiety
1.5 Scent Marking
2 Why Do Cats Paw at Windows?
3 How to Stop Cats Scratching Windows

Why Does My Cat Scratch Glass and Mirrors?

Cats like to scratch at windows for these reasons:

If you can understand why your cat is scratching at the window, you can take action and put a stop to it.

Cat Has Seen Birds Outside

The most common explanation for window scratching is a cat’s desire to hunt birds and wildlife outside. Many cats will sit and watch birds for hours as if they’re hypnotically transfixed. Your cat may even trill and chirp in an attempt at mimicking its prey.

Your cat is likely to grow frustrated with just watching its prey, though. A cat scratching a window fast expresses irritation at its spectator status and wants to hunt birds outside.

As Affinity Pet Care explains, playing hunting games with your cat will indulge its hunting instincts, and no birds need to die. Also, you’ll strengthen the bond between you and your cat.

A toy on a fishing rod is a fun hunting game for cats. Just dangle the toy and allow your cat to stalk it. It’ll pounce on the toy, simulating the hunting that it would do in the wild. Here are some other ways to play with your cat.

In the wild, your cat would not catch its prey every time. You’ll have to prevent your cat from winning every game, mixing the results up. If your cat always wins, it’ll soon become bored and disinterested.

Cats Fight Their Own Reflections

This behavior stems from your cat not recognizing its own reflection. Your cat sees another cat, and this is a rival feline trying to invade its territory. Your cat will guard the home with its teeth and claws.

Some cats realize that they’ve made a mistake sooner than others. They grow bored with what appears to be a constant stalemate. Your cat will notice that it backs away at the same time as the other cat.

Cats Sharpen Their Claws on Windows

Cats are naturally inclined to sharpen their claws, and windows provide an opportunity to do so. Glass is one of the few resilient materials to the attention of feline claws.

This is good in the sense that your cat will not do any lasting damage to the glass. What is less than ideal is the habit itself. It will be like nails on a chalkboard constantly.

This behavior can usually be resolved with scratching posts. Cats need to scratch as it’s part of their natural instinct. Sprinkle catnip on a scratching post, and it’ll scratch the post rather than your windows.

Equally likely is boredom. If your cat doesn’t have enough to do, it’ll find unwelcome ways to amuse itself. It won’t go unnoticed that scratching windows generates a reaction from humans.

Ensure that your cat has plenty to do. Your cat needs to be mentally and physically challenged regularly to stay happy and contented.

Cats have eccrine sweat glands in their paw pads. Some cats, especially those with an insecure past, will rub their paws against windows to scent mark and claim the window (territory) as their own.

Why Do Cats Paw at Windows?

Stretching and leaning on windows is a common behavior in cats. Many felines enjoy dozing on a windowsill, after all. It’s the best way to absorb the rays of the sun, short of being outside. Cats rubbing their paws on a window with no attempt to scratch is fairly common. Here are the explanations:

These will be short-term, sporadic behaviors. If your cat is regularly scratching the window, train it out of this habit.

How to Stop Cats Scratching Windows

If your cat is determined to scratch at windows, you’ll need to introduce training techniques to break the habit. According to SFGate, methods for training a cat out of scratching a window include:

Train your cat out of this behavior, but take the time to work out why it is scratching the window in the first place. Figuring out the cause will relax your cat and improve its demeanor.