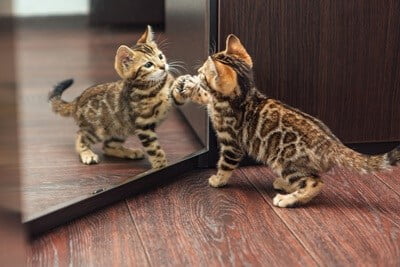 There’s no doubt that cats are smart. However, there is a difference between having a brain capable of learning and one capable of self-consciousness. Being able to recognize yourself in the mirror implies a deep understanding of your surroundings. This then points to higher intelligence, which cats may or may not have.

With that said, the mirror test has been criticized by some researchers as inaccurate or unfair. It’s possible that cats do recognize themselves in the mirror but don’t communicate that in a way we understand. For example, the cat may not care about the reflection enough to react. It may also be confused by the lack of smell. No matter the case, cats appear to find mirrors alarming, mildly interesting, or downright boring, depending on the cat.

Can Cats Recognize Themselves in The Mirror?

Most studies indicate that cats do not recognize themselves in the mirror. They can see that the mirror exists and react to objects reflected in it. However, a cat will be unable to tell that the second cat in the mirror is, in fact, itself.

The mirror test was developed in 1970 by psychologist Gordon Gallup Jr. It’s used to determine which animals can recognize themselves in a mirror. During the test, a strange object (usually a colored dot) is placed on the animal’s body in a place that can only be seen in a mirror. The animal is then placed in front of a mirror.

If the animal touches the dot or attempts to remove it, this proves that it recognizes itself in the mirror. After all, it would only know to reach for the dot if it understood that the reflection was itself.

Do Cats Pass The Mirror Test?

According to the Nokia Research Center, cats do not pass the mirror test. When shown their own reflection, cats have 1 of 3 different reactions:

The most common reaction in a cat is hostility. It will act as if its reflection is another cat and try to attack the mirror. Other cats will act with complete indifference and ignore the reflection.

Simply interacting with the mirror is not enough. Researchers that abide by the rules set by Gordon Gallup Jr. need the cat to try to remove the dot to detect some self-awareness in the animal. This is because the cat might still consider its reflection to be another cat, even if it doesn’t react angrily.

Can Cats See Their Reflection in The Mirror?

Cats can see their own reflection in the mirror as long as they are close enough. Cats see clearly for up to 20 feet away, so if they are within that distance, they will see themselves.

Remember that domestic felines are nearsighted and partially colorblind. What they see in a mirror depends on:

Cats can see shades of blue and green, but red tones are confusing. Because of this, if a cat is far away and any red or pink collar or clothing is nearby, it will have difficulty clearly understanding what it views.

Cats don’t usually have reddish colors in their coats. As such, the cat may not even register its own reflection as another cat if it’s looking at something with a confusing color scheme.

The same can be said if reds and pinks surround the cat. Furniture, humans, and other animals or objects can confuse its perception of what is in the mirror. The cat may not see itself if the surrounding objects are visible, too.

Many scientists have criticized the mirror test. They state that it isn’t a reliable method of determining an animal’s self-awareness. Some researchers have claimed that the flaw in the test lies in assuming the animals even care about the dot. If the cat recognizes its reflection but doesn’t care enough to interact with it or the dot, there’s no way humans will know the cat is self-aware.

Researchers also commented that the test is unfair to how animals communicate. The test is based on reactions to visual input, but animals heavily rely on their other senses, like smell and hearing. For example, dogs do not pass the mirror test, but they pass the sniff test.

Dogs can distinguish and recognize their own urine from other dogs and identify when their urine has been tampered with. A similar study has yet to be done with cats. Nonetheless, given how much their body language relies on sound and smell, it can be theorized that they would pass the test too.

Animals prone to hostility when fearful, like monkeys and gorillas, don’t pass the mirror test either, despite their high intelligence. This may be because they aren’t given enough time and space to understand what they are being presented with. As such, their defensive behavior is falsely seen as a lack of self-recognition. Cats may react aggressively during the test for this same reason.

Because of all these factors, it is unfair to say that cats don’t understand mirrors. There’s a large possibility that they do, even if briefly. However, because the studies are not tailored to their cognitive blueprint, they don’t pass the self-recognition tests.

Why Do Cats Stare in The Mirror?

If a cat stares into a mirror, it can have two possible reasons:

Cats may stare at mirrors because they saw a moving object reflected in them. They aren’t aware that the object in question is actually behind them. So, they stare as they try to figure out what it is and where it’s located.

Other times, a cat will stare into a mirror for a long time, but not because it’s analyzing its reflection. Cats regularly stare at random things while they perk their ears up and focus on interesting sounds.

While the cat may have briefly recognized itself in the mirror, that doesn’t mean it’s thinking about anything while it stares. Cats lack a default mode network, so they cannot ruminate about life, their past, their emotions, or themselves.

Why Do Cats Scratch Mirrors?

When interacting with a mirror, it’s typical for a cat to try and scratch it. Cats scratch at mirrors because they:

When looking at their own reflection, some cats treat the mirror like they’re interacting with another cat. Pawing and scratching at it doesn’t necessarily mean aggression since cats use their paws to play with each other.

They also use their paws to learn more about the objects they interact with. Even if your cat is too young to really understand what the reflection represents, it might want to know how it works.

Cats aren’t as vocal as dogs, which bark to catch our attention. Cats will meow to communicate with us, but they also try to get a reaction in other ways. If you frequently react to your cat scratching at a mirror, it might learn that this is how to get your attention.

Why Do Cats Ignore Mirrors?

If a cat’s eyes are functioning properly, it will be able to see its own reflection in the mirror. Just because cats do not react to seeing their reflection, it doesn’t mean that they think anything of it.

Cats have different personalities, so some are calmer or more aloof than others. If the cat determines that the reflection isn’t a threat, it will not care about the movement it sees. That can be why your cat fully ignores a mirror.

Cat Becomes Aggressive When Looking into a Mirror

This is the most common response. Some cats aren’t used to seeing their own reflection, and it can be confusing. Your feline may recognize that it’s looking at another cat, but it relies heavily on scent to recognize other animals. As such, it might freak out when encountering a cat that has no smell.

It doesn’t help that cats use eye contact to determine intent. The cat may get scared and immediately become aggressive when first encountering the reflection. When it looks into the mirror, it then encounters a pair of angry eyes. This, of course, sets off alarm bells in the cat’s mind and incites hostility.

If your cat becomes aggressive when looking into a mirror, you can train it not to be afraid. You will know that the mirror is harmless, but the cat doesn’t. As such, it gets frightened and stressed every time it looks. To avoid upsetting and frustrating your cat, teach it to associate mirrors with positive encounters using toys, snacks, and affection.