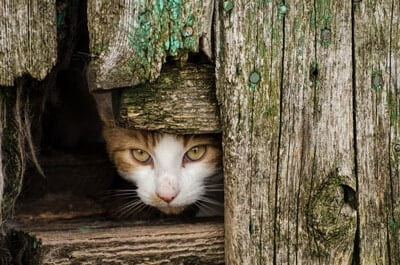 “Adopt, don’t shop” is a popular refrain among cat lovers. While homeless cats deserve a loving family, feral cats are a special case as they’ve never lived with humans and are afraid of us.

Although animal rescue agents disagree, most vets believe that feral cats cannot be tamed. If a feral cat stands any chance of house training, it must be young. Older feral cats are completely wild. If you attempt domestication, it’ll be a long and arduous process with no guarantee of domestication.

You don’t need to adopt a feral cat to improve its quality of life. Consider a “Trap, Neuter, Return” (TNR) policy. You can still provide food and shelter to feral cats on your property, but you need to be aware of the risks involved.

What Is A Feral Cat?

A feral cat lives without human company. It’s believed that there are up to 100 million feral cats in the United States alone. These cats live in colonies and reproduce frequently.

If a homeless cat regularly visits your property, it’ll be tempting to take it in. Before you do so, ensure that the cat is merely stray and not feral. While stray cats can be reintegrated into domestic life, feral cats will struggle.

Differences Between Feral and Stray Cats

Stray cats are domesticated pets that find themselves homeless, either temporarily or permanently. Feral cats are wild animals, so the cat will be governed by survival instincts and behave accordingly.

You can tell the difference between stray and feral cats through their appearance and behavior:

Feral cats may also have a clipped ear tip, which means that the cat has previously been captured, neutered, and returned to the wild. Feral cats reproduce often, and TNR attempts to control the population.

According to The Journal of the American Veterinary Medical Association, 75% of feral kittens live less than 6 months. Without human assistance, they’re at risk of accidents and illness.

If you capture them early enough, a feral kitten may be tamable.

You can assist feral cats without bringing them into your home. Leave food outdoors and offer shelter in cold temperatures. Open your garage doors or strategically place boxes outside.

There are risks associated with this behavior, though. Feral cats rarely travel alone. Once a feral cat discovers that your property is welcoming, it’ll be claimed as territory. The cat will mark and invite other feral cats to join it.

Animal control centers recommend a “trap, neuter, release” approach to feral cats. This involves trapping the cat and taking it to a vet. The cat will then be spayed or neutered, then released back into the wild. This may seem cruel, but it’s an act of kindness. Feral cats are not cut out for domestication.

To trap a feral cat:

Don’t take the cat to a shelter after it’s been trapped. Most cat shelters are already overpopulated and lack the capacity to care for feral cats. In addition, feral cats are unsocialized, potentially sick or diseased, and will fight with other cats. Consequently, many shelters euthanize feral cats.

Can You Tame Feral Cats?

According to The Journal of Feline Medicine and Surgery, opinion is divided on this subject. Animal rescue workers say yes, and veterinarians say no. To stand any chance of taming a feral cat, it must be very young.

The longer a cat lives on the streets, the more independent it will become. Feral cats that are more than a year old will be almost impossible to approach.

Never bring a feral cat into your home if you already have pets. Feral cats will be aggressive and belligerent. Even if the cat does not attack your pets, it may carry parasites and diseases.

Attempting to domesticate a feral cat will require experience in handling difficult cats.

How To Domesticate a Feral Cat

You’ll need to trap the feral cat as it will not approach you willingly. This should be a warning that the cat has no intention of being domesticated.

It may take several days and different techniques to trap a feral cat as it may have encountered traps before. Once you’re ready to bring the cat indoors, prepare for a long and arduous journey.

This will comprise of five different steps:

You’ll need one room that the cat won’t leave, as you can’t allow a feral cat to wander free around your home. Set this room up with everything the cat needs, including hiding places, food, and water.

Feral cats aren’t used to being indoors, so the cat may act destructively. Remove anything of value from the cat’s new territory. The cat will mark with urine a lot. Allow this, at least for a while, as it’ll make them feel more secure.

Leave the cat in the room, but spend time with it. The cat needs to get used to being around humans. It’s advisable to lock the cat in a carrier while you’re in the room to reduce the risk of being scratched or bitten.

Focus on speaking as cats recognize their owners by voice. Don’t attempt to handle the cat. Speaking to the cat regularly will create a sense of kinship. Sitting in the room and reading aloud will enhance this recognition.

Don’t get too emotionally attached to the cat during this stage because you’re unlikely to be able to tame it.

Feral cats carry diseases, may be pregnant, or have parasites.

Call your local vet and ask if they’ll treat feral cats. Some surgeries refuse to do so due to safety concerns. Check if the surgeries charge for their services, as some vets will work with wildlife pro bono.

When you take the cat to a vet, they’ll check if the cat is:

Blood and urine samples will be taken, and the vet will likely run x-rays to check for any broken bones. This is why it’s important to check if the surgery charges for their services as pet insurance won’t cover feral cats.

If the cat isn’t already spayed or neutered, this is critical. Feral cats survive through a constant cycle of mating. A feral cat in heat will yowl at night, increasingly desperate to escape the home.

If the feral cat is given a clean bill of health, you can discuss the next steps. Most vets will recommend returning the cat to the wild, and if you defy this advice, a vet may decline to accept the cat as a regular patient.

Step up the bonding process by talking to the cat and holding off on handling.

The way to gain a feral cat’s trust is through food. Regular access to feeding is why cats first approached humans for care 10,000 years ago. It may take a while to find food that the cat enjoys.

Be prepared for stomach upsets as the cat’s digestion won’t be used to cat food. Feral cats survive by eating from trash cans and hunting live prey. Cat food will provide unfamiliar vitamins and minerals.

Feed the cat at the same time each day as this routine will build a sense of trust and security. At first, leave the food and walk away. After a few days, remain in the room while the cat eats. If it does so, the cat is starting to trust you.

In addition to food, you could offer toys for stimulation, but don’t be surprised if the cat ignores them. Feral cats have never been socialized to play, so their instincts and lifestyle are entirely geared toward survival.

Before too long, you’ll need to litter train your feral cat. Again, this is going to take time. Feral cats are used to eliminating anywhere they please, usually to mark territory.

As your feral cat is used to eliminating outside, bring a little nature to its litter box. Sprinkle some familiar-smelling soil or cat-safe flowers into the litter. You can also pick up spray from a pet store that encourages elimination.

Start by creating a clear path to the litter tray, especially after eating. Create a pathway using boxes or baby gates if necessary. You want the cat to make its own way to the litter box.

If necessary, you can try placing the cat in the tray, but this may result in scratches. Wear gloves and long sleeves for your protection, holding the cat away from your face.

Even if litter training is successful, it can take 8-10 weeks. Never rush a feral cat in any act of domestication training as you’re attempting to overcome powerful, primitive instincts.

Eventually, you’re going to need to handle the feral cat. If the cat remains wary of you, it’ll never adapt to life as a domesticated pet. It will spend its life afraid of everything in your home, including you.

Handling a cat that does not want to be picked up is never easy. The danger is magnified with feral cats as they won’t hold back if they feel threatened. Feral cats are used to fighting for their lives.

Get down to the cat’s level and keep a safe distance. Take one step closer to the cat, watching its reaction carefully. If the cat displays any of these behaviors, walk away:

It may take months before a feral cat permits even the most limited handling.

Start with gentle petting around the back. Don’t attempt to touch the cat’s face until it enjoys being touched. Picking up the cat is the final step of the process.

Even if your feral cat accepts handing from you, this will be a unique situation. The cat will still be terrified of other people. Factor this into your decision-making about whether to keep the cat. If you adopt a feral cat, you should avoid visitors and houseguests for a while.

Feral cats are difficult to domesticate. If you attempt the process, prepare for a frustrating experience. An inability to domesticate a feral cat is no failure on your part.