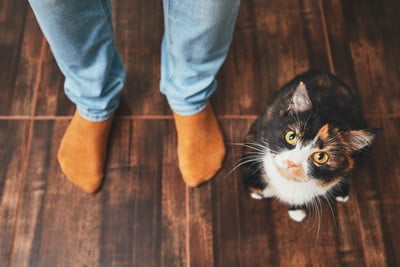 A cat’s gender usually determines how territorial, aggressive, or dominant it’ll be. Of course, both sexes have their pros and cons, behaving differently based on their hormones and certain circumstances.

The most aggressive cat breeds are Turkish vans, angoras, korats, bengals, devon rexes, and Russian blues. While these are the characteristics, personalities, and temperaments vary greatly. Even the friendliest cat breeds can sometimes be hostile, regardless of gender.

If your cat suddenly becomes hostile, consider the context of the aggression as you may be able to identify the source. Fear is the most common explanation, as a scared cat becomes more defensive.

Cats and humans share many biochemical reactions when they feel defensive rage. According to the University of Medicine and Dentistry of New Jersey, Substance P (a neurotransmitter) could be the critical area of the brain responsible for aggression out of a need to defend oneself.

This pairs with the following parts of the brain:

These areas trigger anger, aggression, and defensive rage. Also, they regulate its level of intensity when the body feels it needs to protect itself. For cats, the reason for their aggression is the need to defend themselves from threats. If a cat doesn’t feel safe, it’ll lash out.

Why Are Cats Aggressive Towards Humans?

Cats show aggression toward humans differently than they do toward other cats. That’s because people don’t exist within a cat’s social hierarchy.

A cat that’s defensive or attacks a person usually does so unintentionally. Also, it may have been provoked by someone and felt it had no choice.

Because aggression is circumstantial, males and females react similarly toward humans. You won’t find one sex more likely to attack a human than another.

Cats play with each other and their human owners to refine their hunting skills.

This could include the following:

According to the College of Veterinary Medicine, most kittens learn boundaries and how much force to use when play fighting with other cats.

If your cat was poorly socialized or separated from the litter too early, it might not know when to hold back. This can make it seem like the cat is attacking you when it means no harm.

This can impact a cat’s ability to separate a playfight from true aggression. The more engaged it becomes in play, the less it’ll hold back. As a result, its real hunting instincts may begin to kick in.

When cats get riled, they often turn to genuine aggression. That’s even more true for poorly socialized cats who didn’t learn to regulate their instincts from their mothers or littermates.

Cats may grow overstimulated due to repeated petting or pestering. We may want to be affectionate with our cats all the time, but that’s not always what our cats want.

Why Are Cats Aggressive Towards Other Cats?

Aggression toward other cats is usually intentional due to the following reasons:

Although cats don’t establish a permanent hierarchy, they do have one. It’s constantly in flux as one cat decides to take command over the other based on what it wants and when.

If two cats get into a fight over a sunning spot, it doesn’t mean that spot belongs to the winning cat forever. The losing cat may attempt to take it back if it can.

That means that cats often need to reestablish boundary lines and dominant status.

Two males are more likely to fight for territory and hold on to their claim, which happens more often between two male cats than between males and females.

However, females can exhibit territorial aggression. This is more likely if the female is in heat or has kittens in an area she wants to protect.

Sometimes, aggression among cats occurs because their personalities clash. When cats that don’t get along are forced to socialize, this can result in sudden fights.

What Are the Most Aggressive Cats?

A study published in the National Library of Medicine observed 5,726 domestic cats across different breeds for various behaviors.

However, many owners of Turkish vans, angoras, and korats find that they’re friendly and more sociable than people think. Owning a male of this breed doesn’t guarantee that you’ll have a vicious cat. Likewise, owning a female of a more docile breed won’t mean that you’ll have a mellow cat.

Are Male or Female Cats Friendlier?

When cats are unfixed, it’s easy to say that the males are more aggressive. However, this muddles the definition once a cat is no longer intact.

Hormones play a vital role in a cat’s behavior and reaction patterns. When it’s fixed, and how successfully it’s fixed, can impact the results.

Likewise, personality is a significant contributing factor. A fixed female can still be more aggressive than an unfixed male if she feels like it. Again, one can mellow out significantly, while the other doesn’t.

Unfixed cats are also referred to as intact, unneutered (males), or unspayed (females).

They have differential levels of aggression due to their hormones. Neutering a male and spaying a female removes the key organ that stimulates the production of testosterone and estrogen.

These hormones are often associated with aggression because they’re correlated with increased territorial and reproductive behaviors. Each of these is linked to competition.

According to the Journal of the American Veterinary Medical Association, intact male cats roam more often. Also, they are more likely to guard a larger territory when compared to fixed males.

This can result in an increased number of fights among other cats. A larger territory means higher chances of trespassing, whether intentional or not.

Unneutered males guard a larger territory to increase their chances of finding a mate. Aggressive behavior will occur more frequently during mating season, as they compete with other male cats.

Female cats are territorial, but not to the same extent as males, as they defend much smaller territories. However, they’re still aggressive toward other cats and humans if trespassing occurs. This behavior is more prominent in females that are protecting their litter.

Are Female Cats Aggressive in Heat?

A female cat that has not been spayed will still have her reproductive organs. Therefore, she’ll be capable of entering heat cycles.

Heat cycles, also called estrous cycles, refer to a time period in which female cats are sexually receptive. Cats are seasonally polyestrous, which means that females will experience several estrous or heat cycles within a single breeding season.

Female cats in heat can be aggressive, but not always how you’d imagine. The increased production of reproductive hormones characterizes heat cycles. So, your female may become aggressively affectionate, demanding more attention from you.

According to Physiology & Behavior, aggression during heat cycles can take the form of clawing and biting. Females in heat become more restless. Depending on the individual, she may become more moody and direct unwarranted aggression toward people or other cats.

Aggressive behaviors directed at humans or other cats were often seen in fixed female cats. Also, spayed females were more fearful than neutered males, contributing to their higher levels of aggression.

After their operation, fixed males tend to be more loving, friendly, and playful. However, they’re more likely to urine mark their territory than female cats, even after being fixed.

In contrast, female cats tend to be more social and friendly with other female cats. An exception will only be if the females have a clash of personalities.

According to Applied Animal Behavior Science,  65% of fixed males and 35% of fixed females were the aggressors. Among the sample, there was a slightly higher amount of:

This shows that feline personalities and temperaments are more placid than we believe, especially if they’re neutered or spayed.

Lack of Aggression in Hand-Reared Cats

The most crucial factor is how a cat is raised. A well-socialized and much-loved cat will be more docile, regardless of gender.

Not all male cats are X, and not all female cats are Y. You cannot judge a cat’s behavior based on its breed as many factors can contribute to a cat’s level of aggression.

It’s important to define what aggression means. Some people consider microaggressions as hostile behavior, such as different postures or vocalizations. However, not everyone feels the same way.

Not all males will want to engage in fights, and not all female cats are independent. Choose a cat based on how it was brought up and how much training you’re willing to devote.