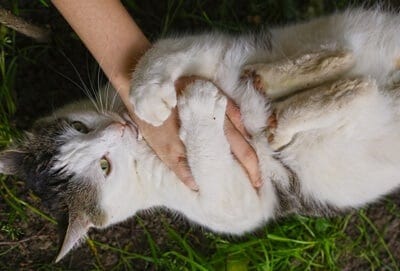 Cats love to play. However, due to their predatory instincts, they may go too far. Similarly, owners that play too rough with their cats are at risk of teaching them bad habits, leading to anger and poor behavior.

Cats exhibit solitary and social play behaviors. The latter is how they interact with humans, stalking, chasing, and batting them in a gentle and controlled way. Some cats enjoy being chased by their owners, while others become intimidated. You shouldn’t wrestle with your cat, as you’ll teach it to treat your hands as toys.

Always pay attention to your cat’s body language, behavior, and vocalizations while you play. If your cat becomes too rough or aggressive, end your interaction to prevent your cat from believing that this behavior’s okay.

Table of Contents show
1 How Do Cats Play With Humans?
2 Can You Wrestle With Your Cat?
3 Do Cats Like Being Chased?
4 What’s the Difference Between Play and Aggression in Cats?
5 Is My Cat Playing or Fighting With Me?
6 Why Do Cats Grab Your Hand and Bite?
7 Can You Play With Your Cat Too Much?
8 Does My Cat Need More Playtime?
8.1 Increased Neediness
8.2 Bad Mood
8.3 Weight Gain
8.4 Naughty Behaviors

How Do Cats Play With Humans?

Cats need to be physically and mentally stimulated. Playtime is a good way to keep their minds and bodies active, allowing them to bond with their owners.

Playtime also presents cats with an opportunity to express their desire to hunt, chase, and kill prey. Feral cats need these abilities to survive, but domesticated cats retain the same instincts from their days in the wild. Their natural urges never go away, which is why cats:

While owners consider these behaviors a fun game, they hold many instinctual benefits for cats. Furthermore, there are two main types of playing behavior, as mentioned:

The latter is how cats play with humans. Playtime can involve toys and games, such as mechanic mice or feather wands, and toy-based training techniques. When your cat’s ready to play, it’ll display the following signs:

Social play is essential for kittens. As American Zoologist explains, kittens explore their strength and abilities when they play. Playtime also teaches kittens the social behaviors they need for adulthood.

Can You Wrestle With Your Cat?

While wrestling is undoubtedly fun, it teaches cats bad habits. Not only does it risk your cat getting injured, but it alters the tone of play from fun to combative. Your cat will view you as a predator or an opponent and will likely become angry or aggressive. Cats don’t wrestle their prey to the ground, so this behavior is unnatural for them.

Most cats also don’t like their bellies being touched because their hair follicles are hypersensitive in this region. Because of this sensitivity, being touched on the stomach can be overstimulating, causing the cat discomfort and even pain if you’re too rough when playing with it.

As well as risking your cat’s safety, wrestling increases the risk of you getting bitten or scratched as your pet struggles to defend itself. Likewise, as it gets bigger, its teeth and limbs get stronger, enabling it to cause greater damage. While wrestling may look like a fun game, it’s not a pleasant experience for your cat.

Some cats like being chased, but this all comes down to your pet’s personality and temperament. How bonded you are with each other is also a factor.

Cats that enjoy being chased invite their owners to play by making eye contact and then quickly darting away. It may also develop the “zoomies,” which is where it runs around the house at high speed. If your cat does this to you, you can chase after it – as long as you keep a safe distance to prevent injuries.

However, some cats are intimidated by the chase and become fearful as soon as you start running. Scared or nervous cats are unlikely to respond well to a chase and hide under the bed or somewhere you can’t reach them. If you keep chasing your cat when it’s uncomfortable with this type of play, it may become reluctant to engage with you at all.

Pay attention to your cat’s body language and demeanor. If it appears agitated or scared during a chase, stop immediately and find other ways to play with your cat. Toys and games are better options.

What’s the Difference Between Play and Aggression in Cats?

Sometimes cats get too rough when they play. While there are apparent differences with play vs. aggression in cats, the two can seem similar. Paying attention to your cat’s body language can help you determine which one’s which.

Play-motivated aggressive behaviors more commonly occur in active cats that are less than two years old. They also tend to live in one-cat households. Because they don’t have other cats to teach them that they’re being too rough when they bite and scratch, they accidentally hurt their owners, who misinterpret this behavior as aggression. It’s just that the cat doesn’t realize its strength. According to VCA Hospitals, causes of aggression in cats include:

One of the main signs of play aggression is when your cat grabs your ankle and bites or scratches it. Play aggression is also commonly directed at hands, particularly if you use them to play with your cat.

This is why you must exercise caution when playing with your pet. Many humans unknowingly encourage rough play by rough-housing their cats with their bare hands. While this may be fun while the animal’s a small kitten, this behavior teaches cats to be threatened by bare hands or to play with them too roughly. This soon becomes a larger problem when the cat gets older and bigger.

If your cat begins exhibiting play-related aggression, ignore it as best you can and leave the room. This should teach your pet that it won’t receive any treats or rewards with this behavior.

Is My Cat Playing or Fighting With Me?

It’s common for cats to engage in rough play, particularly if you’ve rough handled them from a young age. Problems arise when cats direct feline play towards people. Even though they have playful intentions, they become too aggressive. Similarly, feline play consists of mock aggression, making it seem as if your cat’s fighting with you when really, it’s playing.

Listen for hissing or growling. Playful cats don’t make these sounds. Other signs that your cat’s fighting with you include:

If you notice your cat displaying any of these behaviors, end the interaction and leave your cat to cool down. Don’t continue to play, or you’ll encourage bad behaviors.

Why Do Cats Grab Your Hand and Bite?

There are two main types of cat bites. The first is hard and painful. It sometimes leaves a mark on the skin and is designed to warn humans away when a cat feels angry, scared, or threatened. The second is a gentle bite that isn’t intended to cause harm. Instead, it has a range of different meanings – many of which are surprisingly positive.

Cats grab and bite their owners’ hands during a play fight. The bite shouldn’t be hard – it should feel like a gentle nip as part of a fun game. However, if you’re playing too rough with your cat, it may gently bite you to warn you off. Heed this warning, as next time the bite will hurt. Kittens who are discovering their strength are more likely to bite during play. They also bite when they become overstimulated and don’t know how to respond.

However, that’s not the only reason your cat grabs your hand and bites. It also does so to:

Biting is rarely done by accident. It’s a way for cats to show their feelings. Regardless, make sure you wash your hands immediately afterward in case your cat has broken the skin without you realizing it. Cats harbor bacteria in their mouths, which can make the wound infected.

Can You Play With Your Cat Too Much?

Most cats need daily stimulation. Because of how they live in the wild, they’re designed to enjoy short, energetic bouts of play. This is due to their hunting instincts, where they stalk and spring after prey. Unlike dogs, they don’t have good endurance skills. As a result, you’ll want to play with your cat for around 15-30 minutes a few times each day instead of engaging in one long bout of repetitive play.

Cats can also become overstimulated by too much play. It’s difficult to tell when your cat’s had too much, but cats spend most of the day sleeping and rebuilding their energy so that they can hunt at night. Too much playtime prevents your cat from getting enough sleep, making it tired, irritable, and potentially aggressive.

That being said, most cats are good at telling their owners when it’s time to stop. They may:

Pay attention to these behaviors, as you’ll likely experience a painful bite or scratch if you try to proceed with playtime against your cat’s wishes.

Does My Cat Need More Playtime?

As mentioned, playtime provides the mental and physical stimulation that cats need. The problem is cats aren’t always that good at initiating play and need a little encouragement. Keep an eye out for these signs, as they indicate your cat needs more playtime:

You should offer your cat more enrichment through toys, games, and physical interactions if you notice these signs. Not only will this help your pet burn off energy, but it’ll improve your bond.

Some cats go the opposite way and sulk or make themselves scarce. This is a little bit like a tantrum; only your cat can’t use words to tell you what it wants. The likelihood is that your cat’s bored and needs stimulation. While all cats have different needs, make sure you play with your cat a couple of times a day between naps.

A tell-tale sign that your cat needs additional playtime is weight gain. Many owners substitute food for play, causing their pets to eat more than they should. Additionally, owners start mistaking a cat’s attention-seeking for food instead of play. Start introducing short playtime sessions into your cat’s day and start increasing them until it loses weight and gains more energy.

Bored, unstimulated cats are likely to start exhibiting poor behaviors, such as scratching furniture or attacking their owners’ ankles. Cats need to release energy and will do so however they can. Distracting your cat with toys and games is the best way to stop these behaviors in a healthy and controlled way.

Playing with your cat is a great way to build your bond, but don’t let playtime get out of hand. Cats have sharp teeth and claws that do damage, even if they don’t mean to. Play with your cat at least a couple of times each day and monitor its behavior at all times so you can identify when your pet’s had enough­.