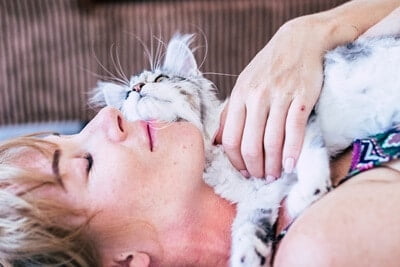 Sometimes, you cannot control your morbid curiosities. A common dark thought, especially for pet owners, is if their cat will eat them, should they die in the home. Some say absolutely not, while others say it’s a guaranteed event.

There are documented cases of cats eating their dead owners. Once the owners have died, they’re another carcass, so domestic cats will eat you to avoid starvation. How long the cat waits will depend on its age, size, metabolism, and health. Cats eat the body while it’s in the earlier stages of decomposition as it’s easier to chew.

With that said, based on current scientific literature, this is a very rare occurrence. Cats can differentiate between what is living and dead. Cats are also not scavengers by choice, and house cats are accustomed to eating cat food, not raw meat. So, four different factors must occur before a cat eats its owner.

Table of Contents show
1 Would Cats Eat Us?
1.1 Do Cats Eat Dead Owners?
1.2 Will House Cats Eat You If You Die?
2 Do Cats Think About Eating Their Owners?
2.1 Will My Cat Eat Me In My Sleep?
3 How Long Will It Take For a Cat To Eat A Human?
4 How Long Before Cats Eat Owners?
4.1 Will A Cat Really Eat You If You Die?

Would Cats Eat Us?

It’s not unheard of to find cats eating human corpses. That’s especially true if the cat is left with no other food options for a long period of time.

Cats are obligate carnivores. As such, they eat the meat of newly dead animals in the wild constantly. This is natural behavior and plays into their instincts for hunting, surviving, and staying healthy. While a person may seem like a non-option from a sentimental perspective, a deceased human will still become a food option for a cat.

More importantly, cats are rarely scavengers. Since the cat did not hunt and kill the human, it will not be naturally driven to eat any part of it. Nonetheless, a cat will resort to scavenging for food if the situation calls for it. If the feline is in dire need of a meal, and a human corpse is the first thing readily available, it will eat it to survive.

Feral cats are less fussy. Meal options can be scarce, leaving the cat hungrier and more willing to scavenge. Therefore, a human corpse left in reach of a feral cat is more likely to be eaten. Even though domestic cats have more access, feral cats have more reason to.

Studies prove that cats will eat their dead owners. One of the earliest documented cases of house cats eating their dead owners was published in 1994. According to The American Journal of Forensic Medicine and Pathology, it found postmortem injuries inflicted on a deceased owner by its own cat.

Most of the injuries were localized around softer areas of the body, such as the face. The researchers proposed that this is more likely to occur if the:

Another study published in 2001 documented house cats eating a human corpse. Although this human did not own any felines, domestic cats that frequented the area were found consuming parts of it at the time of discovery.

Will House Cats Eat You If You Die?

Even still, house cats eating human corpses is a rarity. Studies have little evidence of why cats eat human corpses because they hardly ever do, even when presented with the opportunity.

One study purposefully offered feral cats this opportunity. The human corpses were donated to Forensic Investigation Research Station in Whitewater, Colorado, specifically for research purposes. The Journal of Forensic Sciences found that a colony of feral cats did eat human corpses. In the controlled environment, they regarded them as scavenged meat, no different than animal corpses.

The study proved that feral cats would regularly eat human corpses if given the chance. Although this doesn’t concern house cats, it still provides insight into the fact that cats do eat human corpses. Furthermore, researchers found that cats are more likely to consume the corpse within the earlier stages of decomposition.

Do Cats Think About Eating Their Owners?

Upon realizing this, you may be worried that your cat is thinking about eating you. Perhaps this intrusive thought happens when you’re late giving your cat food, when you take a nap, or even if you’re feeling a little sick. The good news is that you shouldn’t worry about your cat planning to eat you.

It’s plausible that domestic cats may eat their owners upon death. However, it’s because they consider them no different from another animal carcass. The smell of decomposition and the need for food are the primary drivers.

Domestic cats don’t actively think about eating their owners while they’re still alive. There is no need to do so, as you are not a carcass. Instead, you are a living creature that:

There would be no reason for a cat to consider you prey. Even cats that react aggressively toward certain humans do so out of fear and territorial behavior. House cats do not hunt people, so they would not think of us as food.

Will My Cat Eat Me In My Sleep?

You may still be concerned about the cat eating you in your sleep. After all, what if it mistakes you as dead? Luckily, this isn’t possible. Cats have an acute sense of smell. Anecdotal evidence states they can even detect sickness in their owners before we humans are aware.

A cat will easily smell the beginning of decomposition and know that a creature is dead. It will not mistake a living owner for a dead one. A cat may check your breathing during the night to feel close to you and verify your health. It’s not trying to smell a possible meal. It’s just taking comfort in your presence and ensuring you feel well.

Cats that detect illness in their owners do not size them up as a meal. In fact, owners often report cats spending more time cuddling and purring around them when sick.

The effect of purring is known to speed up the healing process in cats, as the frequency emitted and the endorphin released are helpful. Cats will often purr to themselves and around other cats to aid in their recovery.

If anything, a cat will check on you during the night to ensure you’re alive and well. If it senses you feel under the weather, it may try to help you recover more quickly. It’s not aiming to eat you in your sleep.

How Long Will It Take For a Cat To Eat A Human?

Cats rarely eat the dead bodies of their owners, even when given the chance. There are many factors involved in how long it takes a cat to eat a carcass. Determining how much they consume at once will depend on the cat’s:

Despite that, there are general rules to the amount of food that cats eat per day. We can estimate how long it will take for cats to consume a human based on these numbers. The following table illustrates the average amount of food based on their weight and whether or not they are spayed or neutered:

The average human weighs 136 pounds, which amounts to about 476,000 kcals. The following table then shows the estimated amount of time a cat will take to eat a human. This is based on its weight and whether it’s intact, spayed, or neutered.

How Long Before Cats Eat Owners?

Cats will usually eat a human corpse right away if they eat it at all. We know this from the earlier study regarding feral cats. As mentioned, the researchers found that the colony of feral cats was more likely to consume the human corpses that were in the earlier stages of decomposition.

These stages are also known as the moist decomposition stage(s) since the body has not quite stiffened. Furthermore, it was discovered that these cats would gravitate more towards softer tissue areas of the body. These included the shoulders, arms, and surface of the body (the skin, rather than the head).

That’s likely due to the strength of a cat’s jaw. A feral and domestic cat’s jaw is not powerful enough to tear through tough fibers as well as its ancestors. That’s especially true for large carcasses, like a human’s. As a result, felines consume the softer areas of the corpse before the corpse becomes too stiff to eat.

Will A Cat Really Eat You If You Die?

Cat owners rarely want to think about their lovable cats eating their body if an unsuspecting death were to happen. However, it is certainly possible that cats will eat their owners if they die. This is based on:

Even our domestic cats are hardwired with certain instincts, the most basic being survival at all costs. Domestic cats are heavily reliant on their humans for food. As such, it’s a natural conclusion that once their food supply becomes scarce or unstable, they will resort to drastic measures to eat. This may even be at the cost of the deceased owner.

Additionally, you must remember that cats are obligate carnivores. Therefore, meat is the first choice of food for many cats, domestic or feral.

While horrifying to imagine, be sure to remember that cats eat their owners only to avoid death themselves. More importantly, situations like this are rare. It’s more likely to happen if the:

Despite this, it’s not something to constantly worry about. Cats only perform this when numerous unlikely factors all come into play, and it’s not out of malice. Cats often focus on trying to help their owners recover when they feel unwell. They’re not thinking about any other possibilities, whether you’re asleep or awake.