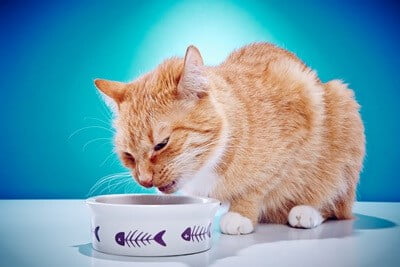 Some cats are fussy about their food. No matter what you feed them, they’ll turn their noses up at what’s on offer. As a result, they’re at risk of going hungry and lacking the energy needed to carry out day-to-day functions.

Cats will starve themselves if they dislike the food. Even missing a single meal can be detrimental because cats are susceptible to hepatic lipidosis (fatty liver disease). Within 24-48 hours of not eating, cats use their fat stores for energy, resulting in liver malfunction. If cats hate the taste of their food, they’ll refuse to eat.

You mustn’t force your cat to eat. If you do, it’ll develop negative associations with its food, causing long-term eating problems. Instead, take careful measures to transition your cat onto new foods and maybe try some different flavors to see which one your cat enjoys the most.

Table of Contents show
1 How To Tell if a Cat Doesn’t Like Its Food
1.1 Bowl Remains Full
1.2 Lack of Energy
1.3 Weight Loss
1.4 Howling For Treats
2 Why Won’t My Cat Eat?
2.1 Food Changes
2.2 Lack of Routine
2.3 Frightened To Eat
2.4 Other Cats or Animals
2.5 Too Many Treats
2.6 Litter Tray
3 Will Cats Starve Themselves if They Don’t Like the Food?
3.1 How Long Does It Take a Cat to Starve to Death?
4 Will My Cat Eventually Eat Its New Food?
5 Should You Force Feed a Cat That Won’t Eat?

How To Tell if a Cat Doesn’t Like Its Food

Cats need to eat to keep their energy levels topped up. They also need various nutrients to keep their organs, bones, and muscles strong and healthy. Once cats stop eating, health issues often occur shortly afterward. If you’re concerned that your cat doesn’t like its food, look out for these signs:

The most obvious sign that your cat doesn’t like its food is that the bowl remains full. Your cat may not even attempt to eat its food at all, or it may take a couple of bites before walking away.

While some cats eat their entire meal in one sitting, most come back to it later on. This is because of their wild instincts – cats save food for later because they don’t know when they’re going to get their next meal. Watch your cat to find out if it comes back for more later on. If it doesn’t, it probably doesn’t like the taste.

Chances are, if your cat’s stopped eating, it’ll become lethargic from the lack of nutrients it gets from its food. You may also notice that your cat sleeps more often and is less interested in playing or going outside.

Cats sleep for roughly 12-16 hours a day to conserve energy for hunting. Any more than this signifies that it’s not getting the energy it needs to be active.

Of course, one of the most common side effects of not eating enough is weight loss. If your cat becomes noticeably thinner, there’s a high chance it doesn’t like its food and is only eating the amount it needs to stay alive.

If your cat starts howling for treats, it’s likely hungry and looking for something to eat. It’s easy to give into cats when they’re hungry, but doing so can lead to addiction and make it much harder for them to eat their usual meals. Treats also aren’t a healthy supplement for meals and can cause health problems in the long run.

Why Won’t My Cat Eat?

Cats are food orientated and are often happy to try new foods. In the wild, cats are opportunistic feeders and eat roughly 10-20 small meals a day, depending on what they find and hunt.

Because of these natural hunting behaviors, it’s not normal for cats to be finicky – even if they’re domesticated. These are the most common reasons why cats refuse to eat:

If you’ve recently changed your cat’s food, it may need some time to adjust to the new flavors, especially if it enjoyed the taste of its previous meals. Some health conditions can only be treated through special diets, so food changes are sometimes unavoidable. However, to entice your cat to eat, you must make gradual changes. If your cat’s unable to adapt, you may need to try a different type of food altogether.

Cats prefer a regular feeding schedule. They are creatures of habit, and establishing a daily feeding routine provides the security and predictability they enjoy. It also helps cats cope when there are changes within the environment. Not only that, but once cats get used to eating at the same times each day, their bodies get prepared for the food they’re due to receive.

The problem lies when cats are allowed a free feeding schedule. That’s because doing so enables cats to develop fussy habits and begin refusing their food. Frequently changing their routine is also a problem, as it causes them to become confused. As a result, stick to a regular feeding routine at two set times a day, as this will teach your cat not to expect food outside its set mealtimes. This should hopefully leave it less likely to refuse its food.

If the environment’s too noisy for your cat, it’ll become nervous about eating. All cats are different and are scared of different things, but all cats need a calm, quiet environment to eat in. If they don’t have this, they’re far more likely to abandon their food in favor of hiding and protecting themselves.

Other Cats or Animals

MSD Veterinary Manual explains how cats live in large social groups but hunt alone. Because cats are solitary hunters, they prefer to eat by themselves.

If other cats or animals are present during your cat’s mealtimes, it’s likely to become too anxious to eat. Cats don’t do well when competing with other animals for food, and in most cases, they give up on their meal altogether.

Many owners make the common mistake of overfeeding their pet treats, which many cats prefer over their everyday food. Similarly, if you tempt your cat to eat its meal with tasty treats, it’ll learn to get a treat each time it refuses its food. Restrict the number of treats you feed your cat and never provide them too close to your pet’s set mealtimes. You may spoil its appetite otherwise.

Cats don’t enjoy eating their food too close to their litter box, especially if it’s heavily soiled and needs a clean. This can be an unpleasant experience for cats, causing them to avoid eating entirely. Luckily, this is an easy fix, as it’s not the food that’s the problem. Move your cat’s bowl to a clean spot far away from the litter tray.

Will Cats Starve Themselves if They Don’t Like the Food?

Many cats eat food they don’t like for a little while before giving up on it. Even though they have strong survival instincts, they will unintentionally starve themselves if they don’t enjoy the food you provide them. That doesn’t mean they intend to die.

However, whether they choose or starve or not depends on how much your cat dislikes its food. If it can tolerate a little bit, it’ll eat enough to survive. Otherwise, it’s willing to go hungry until you switch its food to something more preferable. By this time, though, the damage caused by starvation may have already been done.

How Long Does It Take a Cat to Starve to Death?

It doesn’t take long for cats to starve to death. After approximately 24 to 48 hours without food, your cat will begin to use its fat stores for energy. Unfortunately, because the body cannot properly convert fat stores for energy, the broken down fat blocks the liver and reduces its function, causing it to swell and slowly shut down.

Cats with anorexia develop hepatic lipidosis, or fatty liver syndrome, as it’s also known. According to VCA Hospitals, hepatic lipidosis is unique to cats and occurs more commonly in felines that were overweight or obese before the anorexia began.

Once the disease sets in, the cat becomes icteric or jaundiced and develops yellowing in the whites of the eyes and the skin. This disease is fatal if it’s not treated quickly enough, but it can be managed if caught quickly.

Will My Cat Eventually Eat Its New Food?

By now, you may be wondering: will a finicky cat eventually eat? Frustratingly, it really depends on your cat and how willing it is to transition to its new diet. It can be impossible to switch cats onto a new diet, while others will eventually eat different foods with time, patience, and perseverance.

Similarly, some cats hate the feeling of being hungry and will eat their new food, even if they don’t really like the taste. Others are far more stubborn. Because cats are creatures of habit, they’ll resist their new food for as long as possible.

Bear in mind that it can take between 1-2 weeks for cats to start adjusting to new foods, so you’ll need to watch how much your cat eats in that time to prevent anorexia.

Should You Force Feed a Cat That Won’t Eat?

You should never attempt to force-feed a cat that doesn’t want to eat. Forcing your cat to swallow is likely to trigger a negative association with eating, causing it to become anorexic or develop other eating-related problems. However, allowing your cat to starve isn’t an option either, so you’ll need to tread very carefully with getting your cat to eat.

You can encourage your cat to eat its new food by mixing a small amount into its old food, being careful not to offer more in one meal than it’d typically eat in a 20 to 30 minute period. Your cat should be hungry enough to accept the new food, but you must attempt this process slowly. If you move too fast, your cat may refuse to accept its new food.

Eventually, start reducing the amount of old food while increasing your cat’s new food. You can use the same process when switching dry food to wet food (and vice versa), but you’ll need to move even slower because the tastes and textures are so different.

Another way to encourage your cat to eat is to play with it 15 to 20 minutes before each meal. This should stimulate hunger and increase the chances of your cat accepting its new food. Other things to try include:

If all else fails, you may need to experiment with flavors to find one your cat’s willing to eat. If you need to put your cat onto a specific diet for health reasons, consult the veterinarian who prescribed you the food for advice.

While cats shouldn’t miss too many mealtimes, getting your cat to eat a small amount is better than letting it starve, even if that means using treats to prevent anorexia. However, cats rely on vital nutrients to survive, so they must eat at least two meals a day to remain healthy.