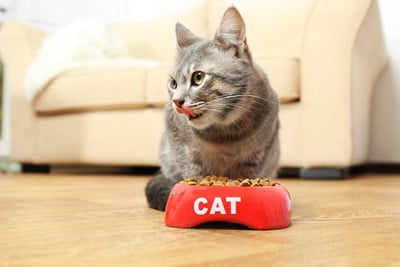 Mealtimes are usually the highlight of the day for a house cat. This can make it strange when cats refuse to eat or only partially eat their food, opting to bury food or scratch around their bowls.

Cats burying food, or cats pretending to bury food, is an instinctive behavior. If the cat has eaten enough, but food is left over, it hides the evidence. This is so that predators don’t know that it is in the area. Cats may hoard food, which is known as caching. Some cats bury their entire food dish to mark territory or protest a dietary change.

If your cat is eating at least once a day, burying food is not a concern. However, buried, cached food can rot, leading to foul smells and bacterial hazards. Find out why your cat’s appetite has changed and address this behavior.

Why Do House Cats Try to Bury Their Food?

There are two main reasons why cats will bury their food, both of which are instinctual. Even the most domesticated house cat will still have the same drives and urges as a feral or wild counterpart.

Cats are not as confident and brave as their body language suggests, living in a constant state of high alert. This makes cats effective hunters, but it also keeps them safe and alive in the wild.

Cats are mesopredators, meaning they sit in the middle of the food chain. Cats will hunt smaller prey, most notably rodents and birds. Cats are also aware that larger animals could harm them in turn, including humans.

Hiding food is a way for cats to mask their presence. Leftover food is a clear giveaway that a cat has been in an area. This will make many felines feel uncomfortable. If the cat has eaten its fill, it will not want to walk away without hiding the evidence.

The food may not be buried in the location it was served. The food will likely be transported somewhere else before burial, throwing a predator off the scent. Unfortunately, it also leaves a mess for an owner to clean up.

Many animals, most notably canines, bury food so it can be retrieved another time. This behavior is not as commonplace in felines. This raises the question – do cats bury food for later?

Cats can indulge in this action, known as caching. This behavior is frequently attributed to pregnant cats. Pregnant queens have a larger appetite and feel more secure if food is always available. More importantly, such a cat is driven by instinct to protect her young.

Caching can be a cause for concern if your cat is experiencing food insecurity. Sometimes, this is unavoidable. As per Anthrozoös, owners that rely upon food banks may not always find pet nourishment available.

Food insecurity may also arise in multi-pet households. All inter-cat dynamics follow a dominant and submissive pattern. This can result in the dominant cat denying food to a subordinate. In such an instance, the hungry cat will hide and cache food for its own safety. Other cats will devour their food really quickly.

Why Do Cats Bury Their Food Dish?

Some cats will not be content to bury the food within their dish, covering the entire eating vessel. This will have a slightly different explanation from hiding food.

Your cat may not be hungry. As cats have such a strong sense of smell, the aroma of food will be distracting in this instance. The cat will cover the food dish to mask this scent.

A sudden loss of appetite in cats is concerning, though there may be an explanation. The cat may have hunted recently and thus feel sated. Alternatively, if your cat roams outside, it may have visited other homes and been fed there.

If your cat is not hungry, do not leave wet food out and assume it will eat later. As per Wildlife Research, cats are primarily drawn to food by scent. This will usually only be effective when the food is fresh.

The longer food remains in the open, the more it loses its scent and grows unappealing. Even if the cat grows hungry later, it will reject this meal. Throw the food away but be prepared for a request for more later.

Cats guard their territory and resources jealously. If a cat treasures something, it will typically hide or cover it. This may involve burying the item or lying on top of it. This can include food bowls, even when full.

The cat may also mark territory through foreign objects. This will typically occur when the cat is no longer hungry but does not want anybody else to enjoy its food. Used litter, for example, could be dropped into the food bowl. The cat may also use its fur.

This process needs to be managed with care. If your cat is territorial over food, taking the bowl away can be seen as an act of aggression. You’ll need to distract the cat before attempting this.

You should also gain an understanding as to why the cat is so territorial over food. Is the cat worried about whether or when it will be fed? Are other animals helping themselves to the cat’s meals? Does the cat lack physical territory and use food instead?

Cats intensely dislike change in any aspect of their life and are particularly sensitive to alterations to diet. If you have changed the brand of cat food that you provide or are feeding a specialist medical diet, your cat will notice.

In the latter case, you’ll need to persevere. Cats can be stubborn but will eventually eat when hungry. Changing brands will need to be a gradual process. Start by mixing the brands, with the latter dominating, and reverse the ratios.

Your cat may be covering its food dish as the vessel is unsuitable for purpose. There are two main explanations for this.

Your cat may be experiencing an allergic reaction to a plastic food bowl. The cat will associate the symptoms of an allergy with food and avoid eating. Common warning signs of a cat allergy include:

If your cat is allergic to plastic, switch to a porcelain bowl. Alternatively, your cat’s food dish may be too deep. This will lead to a concern known as whisker fatigue. Cat whiskers are active all day, every day. This can make them sensitive. If the whiskers brush against a food bowl, it will be uncomfortable for a cat.

Why Do Cats Pretend to Bury Their Food?

Having established why cats actively bury and hide their food, another question springs to mind. Why do cats fake bury their food? Some cats will go through all the steps associated with burying but seemingly fail to follow through.

Oftentimes, this is the cat battling twin instincts. The overriding drive of the cat is to bury the food, yet hunger pangs eventually supersede this desire. This is especially common when cats live with other pets. The cat may try to bury its food so no other animal can claim it. The cat will eventually have second thoughts, though. The safest place of all is within the feline belly.

Some cats may pretend to bury their food, then walk away. This will take the form of scratching around the bowl. This will have a different explanation.

Why Do Cats Scratch Around Their Food?

Some cats scratch around their food before eating or refusing to do so. There are a handful of explanations for this behavior. Most of them are similar to the reasons why cats outright bury food or dishes.

The likeliest explanation is that the cat is marking territory. As explained by the Canadian Journal of Zoology, cats often use claws to scratch our territorial markings. Equally, cats have scent glands in the paws. This act is confirming that the food is claimed.

The cat may also be indulging another instinct – the urge to play with a kill before eating. Cats that hunt wild rodents or birds bat their victim around with their paws before completing their hunt. Fresh, meat-centric food will encourage similar actions.

Equally, a cat may have eaten its fill and wishes to hide the remainder or dislikes the food on offer. The cat is well-mannered and does not wish to risk spilling food on the floor. The scratching behavior satisfies the instinct but doesn’t see results.

In this instance, the food should be removed at once. The longer the uneaten food remains in a bowl, the more the cat will scratch. Eventually, it will spoil, or the cat will knock the bowl over, making a mess.

Why Does My Cat Paw the Floor After Eating?

Cats not only paw at their bowl before eating but may also do so after enjoying a meal. This suggests that the cat can still smell the remnants of the food within the bowl.

Just because you cannot smell the food, it doesn’t mean a cat cannot. The feline sense of smell is up to 16 times stronger than that of a human. Any trace of food that lingers will make a cat feel insecure and unsafe, especially if the cat is nervous by nature.

This needs to be observed closely, as it can become a compulsion. As per Veterinary Clinics of North America: Small Animal Practice, cats can be diagnosed with obsessive-compulsive disorder. Such cats will find scratching around a bowl after eating soothing.

This can be managed through training. The behavior may seem harmless, but it can quickly spiral. Give the cat another focus, such as a treat or play, and wash the food dish thoroughly with soapy water to remove any trace of smell.

It’s common to find a cat acting like it is burying food or outright doing so. Just keep an eye on your cat, ensuring it is eating at least something and not losing weight. Only take action if your cat has lost its appetite.