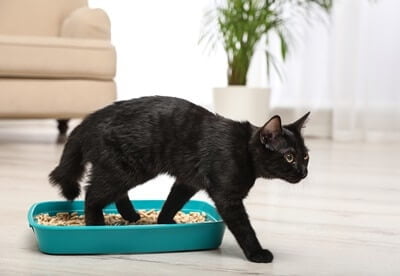 Cats are very secretive about their toilet habits, as it’s a vulnerable time for them. A cat cannot easily retreat from a predator or threat when using the litter box. Usually, cats prefer to poop, hide the evidence, and move on quickly. Sometimes, a cat will verbalize after using its tray, but why does this happen?

A cat that meows loudly after using its litter tray could be letting you know that it’s been to the toilet and wants you to clean up the mess. Sometimes the cat is just excited after going. Also, a yelp of pain could occur due to a painful health condition, such as a UTI, cystitis, or arthritis.

Some cats are more verbal than others, informing their owners of their actions and intentions. If your cat has always meowed after using the litter box, it’s unlikely to be a problem. If the cat has recently begun this behavior, you’ll need to determine why it’s happening and resolve any problems.

Why Do Cats Meow After They Poop?

Not all cats announce that they’ve used their litter tray, and many are secretive about their bathroom routines. Watch your cat from a distance when it goes to the toilet to identify the explanation.

Reasons why cats cry out after going to the toilet include the following:

Eliminating can be quite a liberating experience for cats, especially if they’ve recently been unwell. If the cat has diarrhea or constipation, a healthy bowel movement is a source of great relief.

You’ll understand if your cat is happy about going to the toilet because the cat will race around the home. This is mainly to burn off energy and to share the smell of its waste, as this is a form of scent marking.

Soon, the cat should consider emptying its bladder or bowels a normal activity.

When your cat starts to meow after going to the toilet, look inside its tray. Has your cat managed to eliminate? If not, your cat may need assistance.

Finding it hard to go to the toilet suggests that your cat is constipated or has an intestinal blockage. A young cat that cannot pass a movement will request help from its mother, so the duty will fall on you to help the cat relieve itself.

Take a damp cloth or wet wipe and gently rub this against the cat’s anus. This replicates the experience of the cat’s mother licking its rear, which stimulates the cat into pooping.

This shouldn’t become a regular feature of your cat’s routine, but all cats get blocked up now and again. If your cat constantly needs assistance, you should carefully review its diet with a veterinarian.

Using the litter box is a vulnerable time for cats as they usually bolt at the first sign of danger. However, this isn’t possible when eliminating, as the cat must remain rooted to the spot until it has finished.

If the cat hasn’t managed to poop, this may be due to anxiety. It’s verbalizing to request your protection so that it’s safe if another feline was to attack, which is most common in multi-cat households.

While the cat wants to feel secure, it may also be bashful. You wouldn’t want anybody watching you use the bathroom. However, there’s little scientific evidence to suggest that cats get embarrassed.

Have you recently litter trained your cat? If so, your cat may be expecting a reward for using its tray. This has become part of the cat’s bathroom routine, but most grow out of this expectation once they reach adulthood.

However, if your cat expects a reward every time it eliminates, offer petting and positive verbal encouragement.

A clean litter box is non-negotiable for cats. If the litter in the tray is soiled, it’s unlikely to use it. If you establish a routine, your cat will likely trust you to clean up after it. Some cats will remind you, though.

If the cat shows you what it’s done, it’s announcing that you need to remove the waste and change the litter.

Cats are very particular about their litter trays. Even if the box is clean and sterile, your cat may still be unhappy if something has suddenly changed.

Cats cope poorly with change, so switching to a different litter type can be an issue.

The scent, different textures, and color can be off-putting. There’s also the risk that a cat will be allergic to a new litter. Once your cat has a litter it likes, it’s advisable not to make any changes.

You’ll notice that cats dig after eliminating, hiding their waste in the litter. This is an act of self-preservation as the cat is masking its scent so that predators can’t find it.

The ideal level of litter for any tray is about 3-4 inches. If the cat’s tray contains insufficient litter, hiding waste will be difficult, which they’ll find distressing. The loud meow lets you know that the litter tray isn’t fit for purpose.

The problem may not be litter but the litter box itself.

If your cat roams outdoors, it may prefer not to use a litter box.

If you find no other explanation for your cat’s verbalizations, it’s likely to be in discomfort due to the following:

Most older cats experience arthritis or joint pain, making using the litter tray difficult as cats lack the leg strength to climb in and out of their trays.

The act of leaving the litter tray is becoming increasingly painful, and no cat will tolerate this level of discomfort indefinitely. The cat may also blame the litter box for the pain.

Change the cat’s litter box to one with a low side, as the cat needs to access its tray more easily. Feline arthritis cannot be cured, but the pain can be reduced through lifestyle modifications and vet-prescribed medications.

If your cat meows loudly during or after urinating, it may have a urinary tract infection (UTI). Veterinary Clinics: Small Animal Practice has stated that senior cats are more likely to get UTIs than younger cats.

A UTI is a bacterial infection of the urethra, making it painful for the cat to pee. As is often the case with pain due to elimination, the verbalization will be involuntary.

Here are the symptoms of a UTI:

Once diagnosed, your cat will be treated with a course of antibiotics, which will clear up the infection. However, the problem may return if you fail to keep your cat’s bottom clean and change the litter regularly.

Cystitis has similar symptoms to a UTI, but it leads to inflammation and not a bacterial infection.

Stress, dehydration, and poor diet can cause cystitis. Encourage your cat to drink water frequently, optimize its diet, remove stress triggers, and keep the cat calm.

Cystitis will go away on its own after about a week.

Intestinal blockages prevent a cat from eliminating. Something is trapped in the cat’s body, making the elimination of waste or urine impossible.

In some instances, the blockage will be crystals, which is a side effect of an untreated UTI. These crystals form in the bladder, making urination far more difficult. This can be managed by offering your cat apple cider vinegar because the acidity will dissolve bladder crystals.

If the blockage is in the intestine, this is more concerning as it could be a hairball or undigested food. Add a spoon of olive oil to your cat’s food to lubricate the digestive tract and pass the blockage.

A vet should see the cat if it doesn’t eliminate within 24 hours or continues to meow in pain. Intravenous fluids, or even surgery, may be required to flush out or remove the obstruction.

This makes it uncomfortable for a cat to use its tray as waste applies pressure to the glands. Your cat will likely scoot along the ground or lick its anus excessively.

If your cat meows loudly after using its litter box, you’ll need to identify why it’s verbalizing loudly.

1 thought on “Why Does My Cat Meow Loudly After Using The Litter Box?”