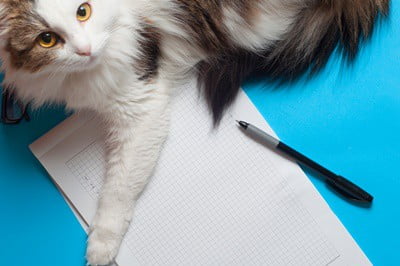 If you drop a piece of paper, it won’t be long before a cat lays or sleeps on it. The same applies to a paper bag that lies flat. While paper is not really a toy, it seems to fascinate cats. There are various reasons why this is the case.

Cats like sitting on paper because it insulates heat and makes an interesting noise. As cats rarely interact with paper, it has novelty value. The texture is unlike that of carpet or wooden floors, and cats are instinctively drawn to unique surface areas. Cats will also see a piece of paper on the floor as unclaimed territory, so they’ll scent mark it.

Cats may eat paper, but it will rarely be harmful. Paper passes through the digestive tract and is removed from the body in cats’ feces. However, the excessive consumption of paper should be discouraged. Keep cats away from paper that’s coated in ink, dyes, and wax, especially if they have an eating disorder, such as pica.

Why Cats Sit on Paper

A piece of paper on the floor will get a reaction from most cats. What is it about paper that merits such attention? Ordinarily, cats only lie upon things they consider important. As with most feline habits, there are various explanations:

Many feline behaviors can be put down to curiosity, including lying on a sheet of paper or newspaper. Cats are fascinated by new experiences. Learning what something is and how it feels, sounds, smells, and tastes is irresistible.

Place a sheet of A4 paper on the floor of your living room and stand back. Your cat is likely to wander toward the paper immediately. The cat has spotted an outlier in the usual arrangement, and it wants to know what this new item is.

If you have a particularly nervous cat, it may sniff or push the paper before running away. What is likely is that your cat will sniff, lick, and lie on the paper. This will satisfy all of a cat’s core senses.

Sight has already been taken care of. The cat saw the paper – that’s what drew its attention. Next, the cat wants to know how paper tastes. This will involve licking and chewing. By pushing the paper, the cat learns how it sounds. Sniffing usually reveals a neutral scent.

The final frontier is touch. The skin on a cat’s underbelly is delicate, which is why many cats react poorly to being touched on the stomach. By lying on the paper, the cat gets to experience a new texture.

In the mind of a cat, everything in your home belongs to it. This makes it frustrating for the cat when owners enforce rules. If your cat is not allowed on furniture, for example, it will look for new territory, including paper.

To human eyes, scrap paper is junk that has not made its way to the garbage yet. To a cat, it is a treasure that must be claimed. A sheet of paper will usually smell completely neutral, but a cat can change this by applying its own scent. From this moment, the sheet of paper, paper bag, or newspaper becomes its territory.

Cats always spot something out of place. In doing so, the rogue object will be seen as a prize to grab. The cat may not be allowed to claim the entire living room floor as humans use that space. Those 11.7 x 8.3 inches of paper belong exclusively to the cat, though.

If your cat is lying on paper, do not remove it and throw the paper away. This could inspire aggression. To a cat, you are taking its personal property. Some cats may treat this as an act of dominance and grow antagonistic.

Leave your cat to enjoy its territory as it will soon lose interest and move on. This is the time to toss the paper in the recycle bin. Your cat is very unlikely to remember the paper’s existence by the next day.

Cats like crinkly paper because they find the noise that paper makes fascinating. Many cats can spend countless happy hours playing with screwed-up paper, batting and pawing it about.

The crinkling of paper also triggers a cat’s hunting instincts. The sound is not dissimilar to leaves being crushed underfoot. This, in turn, reminds cats of prey running through its outdoor territory.

If a cat is just batting paper around in its paws, no harm will be done. If the cat starts to swallow paper, be a little more mindful. You don’t want a cat consuming large amounts of paper as it can lead to a digestive blockage.

Small nibbles of paper are not a concern. These will dissolve in your cat’s digestive tract and eventually be passed in a cat’s feces. The print on certain newspapers can be toxic, so offer plain sheets of paper wherever possible.

A cat could hours scrunching and playing with a paper bag. It’s just a basic toy that will keep your cat entertained. Paper bags hold other appeals to felines, too.

As mentioned, a paper shopping bag may have once contained groceries. This means that it retains the smell of food, which will definitely heighten a cat’s curiosity. Do not be surprised if your cat starts licking the bag.

Even if your cat is not interested in eating the food, the scent will still be appealing. For example, most cats could not be less interested in the taste of strawberries as they can’t taste sweetness, but they really love the scent.

Paper is a natural insulator of heat, so a cat will gravitate toward a sheet of paper when the floor is cool. By using paper, a cat is not placing its sensitive belly skin on a cold surface. This prevents its core body temperature from dropping to an uncomfortably low level.

Stone floors can grow chilly, but not if the cat is resting on paper or newspaper. From the moment the cat lies down, the paper grows warm. It then retains this heat, acting as a makeshift rug.

Oftentimes, heat insulation works in conjunction with other reasons why cats like paper. For example, carpet should be much warmer than paper. Even so, a cat will likely rest or sleep on a sheet of paper in the middle of a carpet. This suggests that the sense of security is more important to the cat.

Never underestimate the possibility of a cat lying on paper for attention. Cats like to choose when you acknowledge their company. If you miss other cues, your cat may start lying on something valuable to you.

This behavior is most likely if the cat believes that the paper important to you. It will watch you and make a mental note of the items that you interact with. If you are reading a newspaper or magazine instead of petting the cat, this will simply not do. The cat will leap on the paper the moment you put it down.

The same applies if you are paying household bills or scrutinizing some paperwork. This will likely demand your full concentration, which will not go unnoticed by the cat. It may leap on a table and sit on your letters.

How you react to this will influence your cat’s future actions. Scold your cat, and it will sit on paper again when it wants some attention from you. The cat does not know that it’s being told off; it just knows what garners a reaction. If you ignore the cat, it will find other ways to get your immediate attention.

This can be vexing but try to see things from your cat’s perspective. It is likely seeking attention for a reason. Some cats are needier and clingier than others. Ensure that you have not missed a scheduled feeding or playtime, though.

Unlike cardboard, paper is easy for a cat’s tough claws to shred. If your cat plays with toilet roll, you’ll know how fun this is for felines. Shredding provides pleasure to cats for these reasons:

Only be concerned by this behavior if the cat shreds paper exclusively to eat. As discussed previously, this could pertain to feline hunting instincts, but could also be a sign of pica. If your cat will not eat its meals but devours shredded paper, it may have this eating disorder.

In many respects, cats lie on paper for the same reason that they lie on dirty laundry. Paper provides a unique texture, separate from the standard floor, that can be claimed. Let your cat have fun with paper. In most cases, it’s a harmless activity. Just avoid leaving out paper that’s coated in chemical substances, such as ink and dyes.