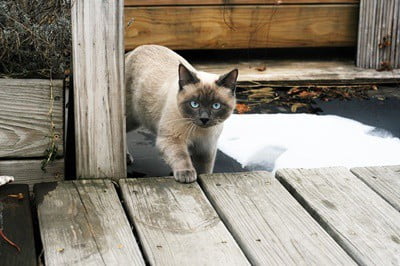 Have you ever touched your cat’s belly only to discover that it sags? While it may feel like your cat is becoming fat, this saggy layer of skin is called the primordial pouch. Most cats have one toward the rear of their body, with this low-hanging belly being an essential part of the feline anatomy.

A cat’s hanging belly protects its vital organs from predators and other cats during fights. Not only that, it enables cats to extend their bodies when running and twist and turn while jumping. Also, a cat’s primordial pouch is used to store food, as wild cats don’t know when they’ll get a meal.

The primordial pouch has evolved for many reasons, and without one, cats would find it difficult to survive in the wild. While the precise reasons for the primordial pouch are still unknown, many scientists agree that it’s an essential part of a cat’s genetic makeup.

What Is The Purpose of A Primordial Pouch?

The primordial pouch is located along the length of the stomach toward the rear, just in front of the hind legs. It’ll swing from side to side as your cat walks.

It looks and feels like excess skin, giving the impression that a cat is carrying excess weight. However, the primordial pouch or low-hanging belly, as it’s commonly known, performs certain functions.

Scientific experts aren’t entirely sure of the reason, but these are the different theories:

When cats fight, they can become very aggressive, especially stray or feral cats who have to defend themselves in the wild and compete for food.

Bunny kicking is a means of gaining dominance over a rival cat. During this move, a cat will grab its target with its two front legs before kicking ferociously with its hind legs.

This abdominal flap protects a cat’s vital organs from injury or damage during a fight. Also, this loose stomach skin enables cats to wriggle out from the clutches of predators.

The primordial pouch enhances a cat’s agility and ability to move. Cats are flexible animals, and their loose skin, including the pouch, improves their ability to run and chase after prey.

Also, it allows cats to take longer, more powerful strides to increase their speed. This is essential when a cat needs to run away from predators or chase after prey in the wild.

Hungry cats will lack energy and won’t be able to sustain a long chase. Being more effective with their running and jumping abilities enables cats to preserve energy until their next meal.

The primordial pouch allows cats to store food when sustenance is in short supply.

Unlike domesticated cats who receive daily meals at set times, wild cats don’t know when they’ll get their next meal. So, these additional food stores are essential to a cat’s survival.

The primordial pouch is an additional food reserve that prevents cats from starving.

When Do Cats Get Their Primordial Pouch?

The primordial pouch is most common in adult cats, regardless of whether they’re male or female. However, cats of any age can develop a hanging belly.

According to the US National Library of Medicine, acute changes in energy expenditure and consumption have been observed in neutered cats.

A cat’s metabolism slows down after the neutering procedure, causing some of its body fat to head to various areas of its body. The fat is most commonly redistributed to the abdomen, resulting in an abdominal fat pad confused with the primordial pouch.

It’s thought that only cats with a strong warrior gene develop a primordial pouch. Based on the “survival of the fittest” concept, these genes are passed down from cats who thrived in the wild. So, breeds who relied on their low-hanging belly to survive still have the pouch due to evolution.

What Cat Breeds Have A Primordial Pouch?

Not all cats have a primordial pouch or at least one that’s noticeable.

It’s common in some domestic feline breeds and species of big cats, including tigers, leopards, and lynx. The primordial pouch serves the same purpose for all cats.

The following cat breeds are most likely to have a noticeable primordial pouch:

If you think your cat is fat, it may be the primordial pouch (and vice versa).

This is the first area of a cat’s body that stores fat if it becomes overweight, giving the impression that your cat is putting on excess weight around the stomach.

Here’s how to tell the difference between a primordial pouch and excess body weight:

Using the above checks, you’ll be able to tell if your cat is fat or has a hanging belly.

Can the Primordial Pouch Be Removed?

The primordial pouch isn’t the same as excess fat, so weight loss won’t get rid of a hanging belly.

Surgery to remove the primordial pouch isn’t available as it would be unethical and would almost certainly have a detrimental effect on a cat’s health and wellbeing.

The primordial pouch is an important part of a cat’s anatomy, especially among breeds that jump high and run fast. This abdominal flap is different from fat and remains essential to feline survival.