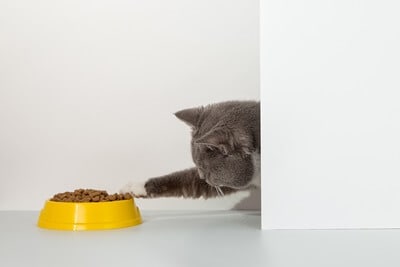 Instead of putting its face in its bowl and eating directly, your cat touches its food with its paw first. It lifts its paw to its mouth and eats the food, much like a human would. This may seem odd, but it’s harmless behavior, and there are good reasons why your cat engages in it.

If the cat’s whiskers are overstimulated, it’ll pick up food with its paws to avoid touching the bowl’s brim with its whiskers. Some cats eat this way since they hunt live animals and hold them while they eat. Also, your cat may feel vulnerable, so it eats with its paws to keep an upright posture.

How your cat eats its food says a lot about its comfort level. So, pay close attention to the way it behaves around mealtime. Keeping in mind how fussy cats are and how much their natural instincts rule how they behave, even the slightest adjustment can change how they eat their food.

Why Do Cats Use Their Paws to Eat?

The main reasons a cat uses its paw to eat include the following:

According to the Journal of Feline Medicine and Surgery, cats’ whiskers are more deeply-rooted than their normal fur, and they’re connected to many nerve endings.

When the whiskers are overstimulated, the cat develops whisker fatigue. They’ll be hypersensitive to stimulation of their whiskers, be it touch or temperature.

If the bowl the cat eats out of is too narrow, the whiskers are certain to touch the brim as the cat reaches for the food. Consequently, the cat will prefer to use its paws to eat.

Doing so avoids stimulating its whiskers, which is one of the reasons you should give your cat food in a wide, shallow bowl.

If your cat frequently eats with its paws, it could be due to how cats hunt and kill their prey.

Why do cats eat off their paws all the time? When cats catch prey, their first step after wiggling and pouncing is to dig their claws into the animal before biting the neck.

The cat will keep a hold of its prey for a while until it’s sure it won’t run away. A domestic cat that uses its paws to eat is imitating the act of holding on to prey as it eats.

According to Mammal Review, domestic cats still retain their hunting instincts. So, this action is completely instinctual and has little to do with whether the cat knows that what it’s eating is alive.

Your cat may prefer to eat this way all the time because this instinctual behavior is deeply ingrained. It may also have grown used to eating this way, so it has no desire to stop.

Cats are always checking for threats and dangers. Cats feel more vulnerable while eating because they have to focus on their food instead of their surroundings.

If your cat doesn’t feel comfortable eating normally, it’ll use its paw to eat. This allows the cat to eat while keeping an upright posture. This way, it can keep its head high and look around while eating.

Cats are curious, which is why they’re always sniffing and pawing at things. A cat may paw at its food to feel the texture and get a good understanding of what kind of food it is.

Since the food is already in the cat’s paw, it may as well just eat it. This tends to happen more when you feed the cat something new or change food brands.

You can tell that your cat was eating out of its paw due to curiosity when it does it just once or twice before continuing to eat normally.

If it eats with its paw at all or for most of its mealtime, there may be an alternative explanation.

Do Cats Eat with Their Paws to Imitate Humans?

If a cat eats with its paws, it’s not because it wants to imitate humans.

Cats do this due to instincts or when they feel uncomfortable eating normally. While cats are much more intelligent than we give them credit for, they can’t imitate everything we do.

Animals that have been proven to imitate humans, such as ravens and elephants, have a certain brain structure that allows them to do so. As smart as cats are, they don’t have the mental capacity to look at how we use eating utensils to eat and then try to imitate us using their paws.

For that to happen, they’d not only have to understand how we use our hands but also have to be self-conscious enough to use their body to recreate the movement they saw.

Is It Bad If My Cat Eats Food Off Its Paw?

A cat that eats food off of its paw may seem like strange behavior, but it’s perfectly normal.

Even whisker fatigue is nothing to go to the vet over, as it’s something that goes away on its own. You can avoid it in the future by getting your cat a different food bowl.

With that said, there are exceptions. Though it’s not an indicator of poor physical health, a cat eating with its paws can indicate discomfort or low food quality. This kind of behavior may indicate that your cat is too stressed out to eat conventionally.

You can help your cat feel comfortable by changing the bowl’s position at mealtime. Place it in a spot where it can see the room better and feel safer knowing that a predator can’t suddenly sneak up on it.

If your cat suddenly develops the habit of eating with its paws, even though you haven’t changed anything, your cat could be curious because the food quality has changed.

You may not have noticed due to how pungent cat food is, but the manufacturers may have changed the ingredients, or the food is starting to rot. Either way, you need to inspect the food if your cat’s behavior toward its meal changes.