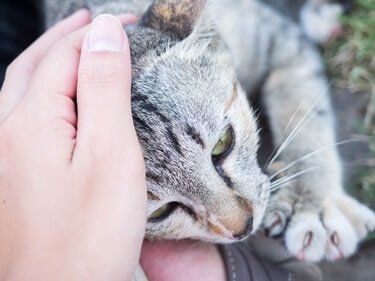 Cats are seen as aloof and defensive of their personal space. That can make it odd when your cat willingly buries its face against you. It may head-butt your hand, burrow against your chest, or try to hide under your armpit. Other times, it will bury its head under a blanket or its own paws.

Cats bury their heads when they feel safe, affectionate, or in need of soothing. When sleeping, cats bury their heads for warmth, to block out the light, or be more comfortable. Cats that burrow against their owners are showing affection or may even be leaving a scent marker. This allows cats to claim their owners and check up on where they’ve been and how they feel. If a cat buries its head in your hand, it might smell something tasty there or associate your hand with petting.

Cats often rub against each other as a greeting. It allows them to show affection, check on each other’s health, and update their individual scent markers. For cats that bury their heads in your armpit, they may be anxious or in need of comfort. The dark, enclosed, and warm area will remind your cat of its litter pile or being snuggled by its mother.

Why Do Cats Tuck Their Heads When They Sleep?

When a cat buries its head, it seems adorable. Then, it seems odd. New owners may be concerned that their cat is uncomfortable, light-sensitive, or frightened. The good news is that a cat that’s willing to bury its head while it rests feels very safe and secure in its environment.

Because cats are predators and prey in the wild, they are careful sleepers. An anxious cat will often hide in an isolated place to sleep. It will then make sure its head is uncovered, so it can easily awaken. This also allows the cat to either hear or see danger coming.

If your cat is willing to block its eyes, nose, and ears to rest, then it feels entirely secure. It’s willing to prioritize comfort, blocking out disruptive light, and warmth over being vigilant. Because of that, house cats usually bury their heads specifically when they sleep. Your cat may tuck away its face in:

Here are the main benefits of this behavior for your cat:

Cats have a favorite position when they rest. For some, tucking their heads into their paws will cushion their face and makes it easier to sleep.

A cat’s coat works to insulate it against cold weather or shifting temperatures. However, curling up and tucking away the head lets your cat preserve even more warmth. For areas like the nose, around the eyes, and along the jowls (which don’t have as much fur), the cat’s paws work as insulation.

A cat that feels anxious or exposed will try to keep its head uncovered, so it can spot and react to danger. If it feels that a secure hideout has been found, though, it will curl up and try to appear smaller. That lowers the chance of a feline being spotted by a hunting predator.

As such, cats find it reassuring to curl up into a tight ball and hide their face. By leaving their ears uncovered, they can still detect incoming predators, but they’ll be better camouflaged.

In your home, where the cat feels safe, it may even cover its ears with its paws. Warmth and comfort are more important, now that it knows there aren’t any threats.

Keep The Sun Out

Cats like to find sunny spots to lounge around and sleep in. However, a warm, sunny area can also be annoying to the eyes. If the light shines directly in a cat’s face, that will prevent it from resting properly or may even cause pain.

To get all the warm benefits of sunlight, a cat will try to shield its eyes when sleeping. The easiest way to do this is by tucking its head into its body. Alternatively, a cat will use its paws or tail to block out the sun.

If your cat fell asleep while bathing, it’s not due to laziness. Cats are felicitous animals, and remaining clean is of utmost importance to them. Grooming can take a long time, though, and cats may get tired in the middle of it.

To conserve energy, the cat will bury its head during a grooming session and fall asleep. It will pick up the important task later, once the nap is finished.

Why Do Cats Bury Their Heads Into You?

Cats don’t reserve burying their heads just for naptime. Perhaps the most adorable and trusting sight is when a fully-awake cat struts up, stands in your lap, and buries its head in you.

The cat may sit there before getting up to do something else. It may also rub its face on you, reposition, and bury its head again. While a heartwarming gesture, this also has a clear purpose. The cat may be trying to:

In the world of cats, smell is important, and pheromones rule all. Cats possess sebaceous glands (or scent glands) along their chins, ears, and mouths. These contain unique chemicals that are detectable to other cats through their noses and vomeronasal glands (located on the roof of their mouths).

According to the Canadian Journal of Zoology, the best way to release the pheromones in the sebaceous glands is stimulation. In other words, by rubbing these areas against “their objects,” cats leave behind their own unique scent markers. This makes it possible for the cat to find that object later, should it get lost. It also tells any nearby cats that the object (or the territory surrounding it) is off-limits.

Of course, this doesn’t just apply to toys, food bowls, or scratching posts. Cats also mark animals (or people) that are a part of their social group. This is why mother cats often nuzzle against their kittens, or a mating pair will rub their faces together.

If your cat walks up, buries its face against you, and nuzzles the spot, it’s purposefully marking you. It not only considers you a valuable member of its group. It wants other rival cats to back off. To humans, these pheromones are undetectable since our noses have only 25% of the odor sensors that cats do. You don’t have to worry about smelling bad.

If you own several cats in one household, they may all try to scent-mark you. If they’ve been raised or trained to get along, this will not result in conflict. Instead, they’ll take turns leaving their own markers. The warning smell is reserved for any unknown creatures. If you come home after visiting a friend’s cat, for example, your cats may be eager to re-mark you.

Alongside smell, touch is vital for cats, so burying their face against a loved one serves as a greeting. By doing so, cats can get a status update on how you are, where you’ve been, and how you’re feeling. You may spot your cats doing this to each other after being separated. Likewise, feral cat groups often greet each other with a quick nuzzling session.

This gesture tells a cat a great deal. For example, it may be able to smell the marker of another cat or understand if you smell ill. It can also feel if you’re cold, overheated, or clammy. Depending on how you react, the cat will understand if you’re happy, sad, or distressed. All this gives the feline a more precise reading on your status than if it sized you up at a glance.

The same is true in reverse; the cat may be trying to tell you how it feels. If you were a cat, you would instantly detect different pheromones, textures in its fur, and sounds.

If your cat is particularly anxious, it may greet you several times. It wants to be sure that you’re present, safe, healthy, and not bothered by rivals. If the cat purrs while it rubs against you, this is a sign that it’s feeling pleased.

For a cat, burying its face against another creature is a huge sign of trust and affection. It’s willing to put its eyes, nose, and mouth in your space. It’s eager to be close to you, feel your warmth, and enjoy a little face massage at your expense. Cats that are comfortable, trusting, and loving will likely bury their faces on you more often.

This is true whether it’s in the crook of your neck, elbows, or armpits. Loving cats will have a no-holds-barred approach to butting into your personal space.

Cats do this with each other, too. If they’ve accepted each other into their group, or are feeling cuddly, they will snuggle together and bury their heads in each other’s fur. You can think of it like a hug.

Why Do Cats Bury Their Head In Your Hand?

Because people use their hands for touching, petting, hand-holding, and firm handshakes, it feels important when a cat buries its face in your hand. In truth, the cat has likely chosen this spot because:

Generally, cats will prefer to bury their head in the broadest, warmest part of you. This may be against your chest or hip. That’s because:

This makes it a poor sleeping spot, and not as comforting to nuzzle against. If your cat chooses this spot, it’s usually out of convenience. It may also be a temporary nuzzling spot until it can get in your lap. If it smells catnip or treats, though, it will be happy to snuggle up and get a pleasant whiff.

Why Do Cats Bury Their Face In Your Armpit?

Your cat may choose the underside of your arm as its nuzzling spot. This isn’t the most common spot, and while this is an affectionate gesture, it can also be uncomfortable or awkward. That’s especially true if you’ve just gotten home from the gym or are trying to do something important.

Like with all nuzzling, cats don’t pick spots at random. If your cat is willing to force your arm up and bury its face in your armpit, it means that:

Felines are habitual groomers and will frequently clean themselves to limit any bad odors in their fur or against their skin. Mother cats also lick and clean their kittens to ensure they stay tidy and hygienic. If your cat thinks of you as its family, it will want you to smell pristine, too.

Although human stink is very different from cat stink, your cat may be able to tell that you’re smelly. According to Applied Animal Behavior Science, cats are better at distinguishing one scent from another when compared to dogs. This is supported by dozens of anecdotes about cats being able to sniff out certain illnesses in their humans.

Although there’s a faint chance that the cat is smelling illness on you, it probably finds your body odor distasteful. By burying its face in your armpit and rubbing around, it’s trying to cover your scent with its own cat scent. This will be far more preferable to the cat’s sensibilities.

Your armpit may remind the cat of its days as a kitten. That sounds odd until you realize that a warm, soft place that smells like a loved one is exactly what a litter pile is. Kittens often snuggle against each other in a tight bundle to:

Mother cats will also snuggle up against their kittens for these reasons. If your cat is feeling stressed, anxious, or clingy, it may try to nuzzle into your armpit once it notices that familiarity. As such, this behavior is common in felines that are weaned too early.

In some cases, armpits are similar to the enclosed space that mother cats give to their offspring when nursing. If you own a kitten, and it begins to nip at your armpit, there’s a good chance it’s trying to suckle. You should try to reposition your cat elsewhere, so it learns to adapt to its surroundings instead of hiding under your arm.