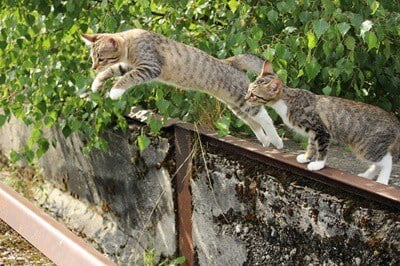 It’s no secret that cats are expert jumpers. Cats have lean bodies and powerful back legs, enabling them to leap great heights with grace and precision. Dogs can jump quite high, but not as high as cats.

Cats have better jumping skills than dogs due to their lithe frame and strong hind legs. Dogs are engineered for endurance and are usually much heavier than cats. Cats can jump 6 times their height, which is about 6-8 feet. The most agile dog breeds have a maximum jumping height of 6 feet.

Cats and dogs are genetically completely different with opposing strengths and weaknesses. To begin a jump, a cat will go down into a deep crouch before lifting its front legs and exploding with the back legs to launch itself into the air.

Do Cats or Dogs Jump Higher?

Dogs are powerful animals with high levels of endurance. They’ve evolved from wolves, which are apex predators that hunt in packs to find, catch and kill prey.

As a result, dogs have strong jaws and broad shoulders. They had few predators to worry about in the wild, meaning they rarely needed to find ways to escape.

As a species, dogs aren’t the right build for jumping high as they’re too heavy and don’t possess the ideal body composition. Dogs are more prone to injury, as their spines aren’t as flexible as cats. Also, dogs find it hard to correct themselves while in the air.

Cats have fast-twitch muscle fibers that make them quick and reactive. They get their impressive leaping skills from their wild feline ancestors, who relied on hunting to survive. Jumping was part of their hunting technique, and this allowed them to catch small animals and birds that tried to escape.

So, while dogs are more robust, powerful animals, cats can jump higher due to their agile build and strong hind legs.

How High Can Dogs Jump?

Some breeds of dogs, like the Border Collie and Australian Shepherd, are considered expert jumpers. Depending on their breed and health, dogs can jump as high as 6 feet into the air.

Small dogs with shorter legs can only jump a short distance from the ground, while larger dogs with longer, more muscular legs can clear fences and other obstacles.

Young, healthy dogs will have a better chance of jumping high off the ground. Even dog breeds known for being good jumpers will struggle if they’re older or in poor health.

If a dog can’t clear the obstacle completely, it may be able to climb the last few inches.

How High Can Cats Jump?

A journal on Petozy confirms that cats can jump 6 times their body length vertically, meaning they can jump 6-8 feet high. To add context, the world record for the highest human jump is just over 8 feet.

The Journal of Experimental Biology said that the length of a cat’s limbs and the muscle mass of its back legs give them superior jumping abilities. Cats with a higher fat percentage will struggle to jump as high.

Why Can Cats Jump So High?

Cats have evolved over thousands of years to be quiet, agile mesopredators. They have become skilled at jumping up trees by chasing small prey animals and running away from larger predators.

Cats’ ability to leap is mostly due to their back legs. They’re powerful and act as a spring when a cat’s ready to jump. Their hind legs are more powerful than the front legs. There’s not much bone density in them either, giving cats superior jumping skills.

The spine is an essential part of a cat’s jumping prowess. A cat’s spine has 53 vertebrae, giving them increased flexibility. Also, there are elastic discs between the vertebrae, which cushions their landing.

Cats have quick-twitch muscle fibers, which means that if a predator or threat is nearby, they can respond quickly and jump several feet within seconds to escape.

What Determines How High a Cat Can Jump?

While cats can leap higher than dogs, certain factors prevent them from reaching great heights.

These factors include the following:

Which Cat Breeds Jump the Highest?

While most cats have the remarkable ability to jump at least 6 feet high, some breeds boast superior athletic skills that allow them to leap higher than most other domestic cats.

Known for their agility, the Egyptian Mau can run up to 30mph, making them the fastest domestic cat breed in the world. Their formidable legs allow can propel them to high perches with ease.

With bundles of energy, this athletic breed rarely sits still. Abyssinians are expert hunters and can easily jump 6 feet into the air.

Somali cats have slim, muscular bodies and strong legs that allow them to leap high into the air. Somali cats need entertainment through access to high perches and climbing trees.

Bengals are always on the go. They love to sneak around and climb high places where they can see what’s going on around them. They’ll jump on worktops and other restricted areas for attention.

Remarkably, Savannah cats can leap 8 feet into the air from a standing position.

Due to their inquisitive nature, they love to jump on high cabinets and doors to watch the world go by. A cross between a serval and a domestic cat, they have retained many of their wild qualities.

Which Dog Breeds Jump the Highest?

A small number of dog breeds can jump high as cats.

Some are working dogs, while others have a natural ability to jump high. Consequently, they’re often selected to perform at dog shows. With training, they can become expert show jumpers.

Also known as the Australian sheepdog, this breed is used for rounding up livestock, including sheep, goats, and cattle. They have muscular limbs and a long tail, which provides excellent balance.

Australian Shepherds are primarily used for herding livestock but love to jump over obstacles and play games of fetch, including Frisbee. They’re notorious for jumping up at people.

The Border Collie is a fun, energetic breed. They’re obedient dogs, so they can be trained to jump over obstacles and through hoops.

A herding dog, Border Collies do well in sports due to their agility and jumping prowess. Though, they can escape their yards or compounds by jumping over fences.

Devoted and loyal, the German Shepherd is one of the most common working dogs globally. They’re versatile and easy to train, making them one of the most popular dog breeds within the armed forces.

They have boundless energy and often jump up at people as a way of greeting them. Also, they’ll jump out of aggression to protect their familiars from danger.

While only small, Jack Russel terriers can jump as high as 5 feet. They’re athletic dogs with bundles of energy, which allows them to jump over fences if they’re in a mischievous mood.