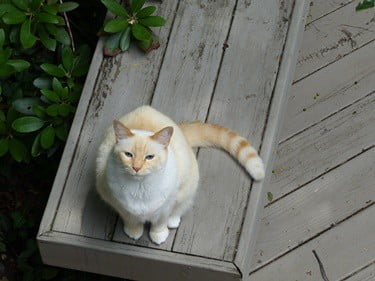 Siamese cats are among the most popular breeds due to their pleasing appearance and friendly, affectionate nature. Flame Points Siamese cats are a color variation of this classic breed. They’ve retained many of the Siamese breed’s desirable personality traits but have a distinctive orange flame coloration.

Flame Point Siamese cats are similar in appearance to regular Siameses but are slightly larger. Their bodies are predominantly white or cream, and they have orange flame points on the ears, paws, tail, and face. Their eyes are bright blue, which is what all Siamese cats are famous for. 75% of all Flame Points are male, and they are up to 5 pounds larger than females.

Flame Point Siamese cats are rare and hard to find, but once you own one, you’ll have a firm friend for life. You can even take into account your cat’s color when naming your flame point Siamese.

What Makes a Flame Point Siamese?

Flame Points are slightly different from standard Siamese cats. They’re a cross between a Siamese and a red or orange American tabby shorthair. Flame Point Siamese cats weren’t bred until the 1930s, and it took some experimentation to get the colors to the point they are today.

When it comes to Flame Point Siamese genetics, the colors found in the coat result from pigmentation of the individual hairs. Melanin is produced at the base of the growing hair and is responsible for the breed’s off-white or cream fur.

The body produces melanin and also uses an enzyme called tyrosinase. As described by Animal Genetics, tyrosinase mutations are associated with coat colorations in cats, including the points of the Siamese.

Flame Point Siamese cats have a mutated version that’s sensitive to heat. When the temperature’s too high, the mutated tyrosinase fails to work and prevents the body from producing melanin.

Because the face, ears, tail, and paws are further from the core of the body, they’re cooler, so the mutated enzymes can participate in the creation of pigments, giving these areas their darker, orange-colored fur.

Interestingly, all colorpoint cats, including Flame Points, are born with entirely white fur. When they’re in their mother’s womb, they’re kept warm, even the parts that eventually turn orange. The heat renders the tyrosinase enzyme ineffective, and the kittens can’t produce the pigment until they’re born. As soon as they are, their bodies produce melanin in the cooler areas of their bodies, creating the orange colorpoints.

Genetically, Flame Point Siamese cats are red tabby cats with two copies of the colorpoint gene. If they were able to produce melanin, they’d be red tabby cats. Flame Points always have at least one tortoiseshell or red parent. The red gene can’t be carried as it’s not a recessive trait.

Flame Point Siamese cats are slender with long ears, legs, and a triangular head. Cats that are bred to be show standard are becoming more extreme in their appearance. These are sometimes called modern Siamese cats. Their primary aesthetic traits include:

Like traditional Siamese cats, Flame Points have white or cream fur. Some develop subtle orange tabby markings, but more often than not, their bodies are plain. They can sometimes develop a red tinge, so the fur is rarely completely white or cream.

Most Flame Points develop red fur around their eyes and nose – and some have a distinctive M-shaped mark on their forehead, which comes from their tabby genes.

Flame Points also have red or orange tips on their ears and face, which are known as colorpoints. Their tails are orange and stripey and are one of their most distinctive features.

Flame Point Siamese cats have piercing bright blue eyes, which is what Siamese cats are most known for. Some cats appear to have green eyes, but they’re usually silvery-grey and only look green in certain lights.

As described by the Institute for Laboratory Animal Research, a lack of melanin in the retina creates the blue coloration. Interestingly, all Siamese cats develop blue eyes, and that’s because both layers of the iris lack pigment.

Many Siamese cats develop a squint. They can also become cross-eyed due to the genetic flaw in their eye structure. However, due to successful breeding programs, this is now rare.

How Big Do Flame Point Siamese Get?

The orange point colors of Flame Points Siameses are tricky to breed, so they’re rare. As a result, they’re hard to find in captivity, and only experienced breeders can produce them. Because of their rarity, you need to make sure you’re purchasing a legitimate Flame Point Siamese. Before you buy:

Some breeders will try to sell you a standard Siamese cat by claiming that the orange points will develop as the cat gets older. You can avoid this by being prepared and going to the breeder armed with the right knowledge.

How Much Are Flame Point Siamese Cats?

The price of a Flame Point Siamese ranges from $400 to $2,000. This is driven by their rarity and how hard they are to get hold of. Reputable breeders charge more because of the difficulty involved in breeding them. If the cat’s too cheap, it either has a history of health problems, the breeder’s inexperienced, or it’s not a true Flame Point Siamese.

If you’re looking to find out the basic information of Flame Point Siamese cats at a glance, here’s all you need to know:

What Other Colors Do Siamese Cats Come In?

Flame Point Siameses aren’t the only type of colorpoint breed. Siamese cats come in a range of other colors that are recognized by the world’s professional cat associations, including:

Seal Point Siamese cats are the most common color variation. They have a cream or pale-fawn-colored body with dark brown (seal) color points on their face, starting around their nose and fanning out towards their ears and necks. They also have dark paws and a brown tail. From a distance, their color points almost look black.

Blue Point Siamese cats are mostly white with grey markings on their legs, tail, and ears. They also have signature slender bodies, triangular ears, and a long tail. Their eyes, like all other Siameses, are piercing blue. They’re becoming very popular – so much so, their price ranges from $600 to $2,000, depending on the breeder.

Chocolate Point Siameses have ivory bodies and light brown (almost like milk chocolate) colors on their nose, ears, paws, and tail. Their paw pads and nose leather are a sweet cinnamon pink color. Chocolate Points look slightly different from Seal Points, as their coloration is much lighter. However, they do bear a striking resemblance.

Lilac Points are one of the most famous Siamese breeds. They’re the result of the blue gene to chocolate, so they are essentially diluted Chocolate Points. Their color points are light grey, but they look more pale blue. Their bodies are a beautiful off-white color, and they have long, pointy ears.

While the differences between classic Siameses and Flame Points are relatively subtle, they’re enough to warrant their popularity. The orange flame points are what many owners love, and their friendly, affectionate personalities make them all a more special cat breed.