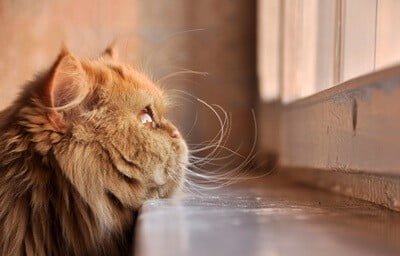 Cats are often seen as aloof and mysterious, partly because it’s hard to tell what they’re contemplating. They aren’t as expressive as dogs, and they lack the communication skills of parrots. To this point, few scientific studies have explored how cats think and what they think about all day.

During the day, cats recall memories, consider them, and adjust future behavior. Cats don’t spend their time thinking about their day or how they feel. Also, cats don’t have idle thoughts as they lack a default mode network, and they can’t think in a language as they lack Wernicke-like areas.

Cats can’t think consciously, only subconsciously. Still, cats think about previous experiences and use them to guide their future behavior. Only having memories to rely on limits the scope of things cats can contemplate. However, as long as they feel content, they don’t need much more.

Do Cats Think About Things?

Cats’ indifferent behavior can make them seem limited. In truth, cats can think about various matters, but not at the same level as humans.

However, cats can’t think about the following:

Cats can’t daydream or contemplate the meaning of things because they lack a default mode network. This group of brain segments interconnect and activate when humans think idly. When we aren’t focused on a goal, we let our minds wander, and our default mode network is active.

That’s why animals, such as cats, appear more simple-minded. That’s not to say that cats are simple creatures; it just means they can’t think about the world or themselves introspectively.

How Are Cats Able to Think?

Cats can’t contemplate things, so they only think about things circumstantially.

For example, when a cat is resting with its eyes closed, it isn’t thinking about anything. However, if you walk over and present it with a new toy, it’ll use its working memory to learn about the new object.

In particular, it’ll visualize it in its mind and subconsciously link it to a previous experience. This will help them determine if the toy is safe to approach.

Depending on its previous experiences, it’ll react differently. That’s why some cats pounce on new toys from the get-go, while others are disinterested or scared.

Cats’ working memory is only active when presented with new information. Once the cat is familiar with the toy, it won’t think about playing with it, as it’s acting entirely on instinct.

What Is A Cat’s Thought Process?

When a cat is relaxing and not paying attention, it isn’t thinking about anything.

You can view it as a meditative state where the cat can feel contentedness, sleepiness, etc., but it can’t think about its feelings.

The cat may activate its working memory when something disrupts or distracts it from this state. That thought process allows it to react the right way when facing certain situations.

Working memory is the cognitive system that can hold information for a short amount of time. In particular, it does this to guide decision-making. It sounds like short-term memory, and many people confuse the two, but there’s a difference.

Short-term memory takes information and releases it quickly. That’s true regardless of whether or not we used the information for something.

However, working memory takes information for a brief period, and this is specifically done so a cat can manipulate its performance in cognitive tasks.

When Do Cats Use Working Memory?

If you’re teaching your cat how to high-five your hand using treats, it’ll use its working memory.

In particular, it’ll link the act of touching your hand with getting a tasty snack. It’ll draw upon its working memory to remember what it has to do to get the treat as it learns how to complete the act.

This only works while the cat is learning the trick. Once it learns the trick and stores it in its long-term memory, it’ll complete it because it has been conditioned. It’ll instinctually associate the high-five gesture with snacks and do it out of habit. It’s not that it’s actively thinking about it.

Do Cats Think in English?

Cats are incapable of thinking in English because they don’t understand English.

Of course, it may seem like they understand what we say. However, the cat isn’t reacting to our words because they can’t process them when we speak.

Cats are creatures of habit, and they can associate certain gestures, sounds, and smells with specific things. If you always ask your cat if it’s hungry just before feeding it, it’ll come to associate the words, your tone of voice, and the can in your hand with food, reacting to this knowledge.

When you ask if it’s hungry, the reaction you get from your cat comes from conditioning and habit.

What Language Do Cats Think In?

Cats don’t think in any language. A human’s ability to think in a language is attributed to a section in the brain called Wernecke’s area, which is in charge of language comprehension.

Researchers have yet to find a similar region in a cat’s brain. Because of that, it’s safe to say that they cannot think in any language at all.

It takes neurological processing to learn, comprehend, and speak a language. Even though cats are intelligent, they don’t have the proper brain composition to think in a language.

Do Cats Think in Meows?

Cats meow to communicate with us all the time.

Cats only meow in our presence since cat-to-cat communication is mostly non-verbal. If they can vocalize to communicate with us, they must think in meows, right? In truth, cats don’t think in meows, and meowing shouldn’t be considered a language at all.

Cats meow to us because they’ve learned it’s the best way to get our attention. It may appear as if they’re saying something, but cats only make this noise because it gets a response from humans.

Cats can produce different meows to express different intentions. However, this doesn’t mean they think of the meow and vocalize it in their head.

For example, you may tap your desk to catch the attention of someone sitting beside you. However, that doesn’t mean you’re thinking in taps, as it’s just a noise you made in the hope that the person near you will look your way. If you tap more insistently, it indicates impatience.

When annoyed, cats may vocalize a deeper-sounding meow that sounds like a warning. However, it’s just a noise that indicates intent. Cats are incapable of thinking in a comprehensive code.

Any vocalization they make comes from an understanding of:

How Do Cats Think Without a Language?

It may seem odd for a cat to think without a language. After all, most of us think in our language, so a life without that kind of thought processing is difficult to imagine. Still, not all humans think in languages, and those that do still don’t think in languages all the time.

Cats can think in pictures, using their working memory to process information and guide their actions temporarily. They have logic and reasoning capabilities without needing to use language.

That’s much like babies who have yet to learn how to talk. When a cat is learning something new, it uses its senses to make sense of things.

This is proven by the fact that cats have excellent object permanence. According to George Mason University, cats have fully developed sensorimotor intelligence. This ability to reason suggests that language comprehension isn’t necessary for logical thinking.

Do Cats Think About Their Past?

Cats can’t think about their past because they don’t have the brain structure to contemplate past events.

Much of a cat’s personality is shaped by what it goes through when a kitten. Like any animal, it’s able to experience traumatic events and develop certain neuroses.

For example, a kitten chased out of homes with brooms might develop a fear of brooms that carries on into adulthood. However, this doesn’t mean that it can actively think about specific moments in its past.

When a cat is traumatized by something, it learns to avoid it. The next time it reencounters the same thing (let’s say, the broom), it cannot recall in detail all its previous encounters with brooms.

It’s able to avoid it instinctually, but only because the trauma has left an imprint on its mind. Brains use this survival technique to protect the host from harm or stress.

Even if your cat has never seen a snake before, it might be scared of cucumbers because they resemble snakes. The cat isn’t frightened because it remembers an encounter with a snake.

Instead, it’s responding to something that’s triggering a surge of neurochemicals that say the object is dangerous. The same thing occurs when it’s something or someone that the cat has already encountered in the past.

The same also goes for positive experiences. Every time you pet your cat, and it purrs happily, it’s not thinking about all the other times you pet it but enjoying the moment for what it is.

What Do Cats Think About When They Stare?

If it’s staring at you, that’s a completely different story. Most cat-to-cat communication is non-verbal, and staring is just another form of communication to them, like meowing.

If the stares are long, but the cat’s eyes are half-closed, it might be sleepy or showing you affection. Slow-blinking means the cat is comfortable with you. Of course, the cat isn’t actively thinking about you and how it feels about you. However, it’s experiencing the emotions as they happen.

If the cat has a fixated stare at a wall, it isn’t thinking about anything in particular. Instead, it’s enjoying the feeling of being in a safe environment—no thoughts, head empty, but extremely contented.

What Do Cats Think About Their Owners?

Despite their loner attitude, studies have shown that cats can grow attached to their owners.

Still, knowing that your feline cares about you might not be enough to sate your curiosity. How do cats see us? What do they think of who we are and what we do?

There is no official study on this theory, but feline experts have reason to believe that cats see us as big, hairless cats. This is drawn from feline behavior when around other cats vs. humans.

When around their owners, cats will:

Their energy levels don’t change, regardless of whether they’re in the presence of humans they trust or cats they trust. In comparison, dogs behave differently when humans are around, which shows awareness that humans are different from them. Cats show no such change, so we can assume they think of us as weird cats.

Of course, knowing what we know about cats’ brains, they cannot consider their feelings about us. Even if they are attached to their owners, their relationship with humans is not something they ponder.

How Do I Know What My Cat is Thinking?

The best way to know what your cat is thinking is to spend time with it.

Cats do things out of instinct and habit. When it wants something, it’ll communicate depending on how you’ve reacted to its efforts in the past.

All cats have distinct personalities and ways of communicating. The more time you spend with your cat, the more you’ll understand how it thinks.

With that said, cats still aren’t fully domesticated and might display some strange and wild behavior that leaves us scratching our heads. After all, it wouldn’t be a cat if it didn’t behave strangely.

2 thoughts on “What Do Cats Think About All Day?”