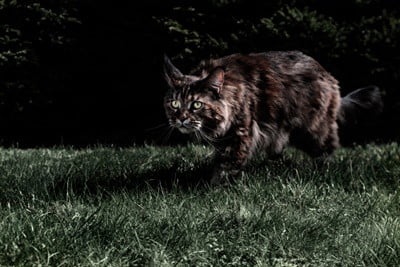 It is common to find a house cat sleeping during the daylight hours, growing significantly more active after dark. Cats enjoy the quiet of the night. With fewer people around, cats are free to embrace their natural instincts.

Cats that wander outside after dark like to explore the terrain and claim new territory. With fewer people on the streets, cats can roam with greater freedom. Cats hunt at night as many prey animals are nocturnal. Some cats will seem to hide from other more dominant pets, while others will search for a new mate.

Many cats will welcome the opportunity to roam after dark, but it’s not always safe for them to do so. Find out what cats get up to when the sun goes down and decide if you’re happy for them to stay outdoors while you’re asleep.

Table of Contents show
1 Why Do Cats Like Nighttime?
2 Do Cats Prefer to be Inside or Outside at Night?
3 Where Do Cats Go at Night?
4 What Do Outdoor Cats Do at Night?
4.1 Exploring Territory
4.2 Hunting for Prey
4.3 Hiding from Dangers
4.4 Seeking A New Mate
5 Will My Cat Be OK Outside All Night?
5.1 Traffic
5.2 Other Animals
5.3 Cold Weather

Your cat will likely sleep throughout the day, growing more active after dark. A study published in Wildlife Research suggested that wild cats are primarily nocturnal. In reality, cats are crepuscular (most active at dawn and dusk.) It’s just that many cats actively enjoy the peace and tranquility of the small hours of the morning.

After dark, humans are usually in bed sleeping. During the day, cats are exposed to a constant cacophony of sounds and smells. When night falls, the streets outside are considerably quieter. It’s usually a more peaceful time for cats.

Cats can also see well in dim light. As explained by the American Journal of Optometry and Physiological Optics, the unique anatomy of a cat’s eyes reflects minimal light. In many respects, feline vision is sharper at night.

Walk the streets at night, and you’ll no doubt spot many felines going about their business. These will primarily be domesticated house cats seizing a rare opportunity to explore and make a claim to the streets.

Do Cats Prefer to be Inside or Outside at Night?

Some felines would much rather be at home when night falls. If your cat feels secure with you and has assigned territory, it will likely stay inside. This way, the cat remains warm and safe from harm.

However, some cats prefer to wander at night. This is likely if the cat has frustrated hunting instincts or has not been spayed or neutered. As mentioned, cats enjoy the quiet and solitude that the night brings.

If your female cat is in heat, she will want to be outside at night. She will pick up the scent of intact toms that are out patrolling. That why cats in heat yowl and howl after dark as they are trying to attract the attention of a mate.

If your cat is male and has not been neutered, it will also be keen to get outside. Intact male cats are always keen to breed. Without humans getting in their way, the night offers the perfect chance to do so.

Where Do Cats Go at Night?

Some cats will remain in the confines of their backyard at night, but the majority of cats will consider this a wasted opportunity. The cover of darkness provides the ideal opportunity to explore new terrain. Consequently, a better question is, “how far do cats roam at night?”

Cats have varying levels of curiosity, courage, and wanderlust. The average roaming distance for a cat is between 40 and 200 meters from home. It all depends on the risk vs. reward equation.

If a cat finds territory, prey, food, water, and stimulation close to home, it will not feel any compulsion to travel far. Cats like to know how to retreat to a safe space if necessary.

If the immediate territory offers nothing of interest to a cat, it will feel compelled to travel further. Equally, cats that catch an interesting scent may follow it as far as they deem necessary. It is not unheard of for cats to travel for miles on foot, lost in the moment.

What Do Outdoor Cats Do at Night?

We have touched briefly upon what cats like to do outside after dark. Feline behavior at night will fall into four categories – exploring, hunting, hiding, or mating. Let’s look more closely at each of these activities:

Exploration, and the claiming of territory, is the most common activity of cats after dark. With no people around and less traffic on the road, cats can wander with greater freedom than they ordinarily would.

These nocturnal explorations are also a good opportunity for cats to claim new territory. By day, the terrain will likely be guarded jealously by incumbent cats. If they are not around, your cat can apply its own scent and stake a claim.

Cats like to explore their surroundings and satisfy their natural curiosity. Daytime can feel overwhelming for cats as sights, smells, and sounds surround them.

Your cat may have had its interest piqued by something during the day. It just felt unable to act on this curiosity at the time. By night, when all is quiet, a cat can spend its time investigating whatever has captured its imagination.

Many animals that are considered the natural prey of cats, most notably rodents, will be active after dark. Your cat will notice this and pair its schedule to match that of these small animals.

Night hunting is easier for cats as they rely on their hearing and scent. If the streets are quiet outside, these senses are sharper and more refined. With fewer distractions, cats can focus on their prey.

Cats hunt through instinct, not hunger. Simply filling a bowl of kibble overnight will not stop a cat from hunting. To felines, stalking and capturing prey is as natural as breathing.

Some cats may prefer to hide outside the home at night. This does not mean that your cat hates you, but it could point to a problematic relationship with another pet.

As per Anthrozoös, most multi-cat households fall into a natural hierarchy of dominance and submission. In most cases, all are happy with this arrangement. As long as all cats have their own territory, they can coexist peacefully.

Alas, some cats will never play well with other cats. Dominance in cats can cross a line into bullying and aggression. Ordinarily, owners will break up a catfight once spotted. If you’re sleeping in another room, this may not be possible.

If a cat does not feel safe without human protection and intervention, it may seek a hiding place until you wake up. At this stage, it will return, confident that any untoward behavior from a feline housemate will be managed.

Cats that are not spayed or neutered will look for a mate at night. That doesn’t mean that you can let a cat in heat wander with abandon during daylight hours.

This is an opportunity to mate uninterrupted, and it does not take long for two cats to conclude the mating process. It is often over in as little as 30 seconds. It’s easier to find this time after dark with no humans to interrupt or intervene.

Cats also find it easier to find a suitable partner at night. During the day, every cat in a neighborhood may be wandering around. This can grow overwhelming for a female and lead to fighting among males. At night, at least some of these cats will be locked away inside.

Will My Cat Be OK Outside All Night?

Many owners are uncomfortable with the idea of letting their cats roam outdoors at night. This is partly born of human fears and concerns. We are hardwired to stay home in the darkness and would prefer our cats to do the same.

This does not make concerns over allowing cats outside at night irrational. Nighttime can be a dangerous time for domestic felines. If you decide to leave your cat outside overnight, you must be aware of the hazards. If in doubt, keep the cat flap open so your cat can come and go from the home as it pleases.

Road traffic accidents are a regular cause of feline injury and death. In a study published by Veterinary Record, 71.4% of 490 cats struck by a cat suffered fatal injuries.

Traffic is less common at night, and cats are less likely to be hit by a moving vehicle. Unfortunately, while the number of accidents may reduce, the impact of such a collision could be worse.

At night, cats are less likely to mindful of the roads. By day, with numerous cars moving at speed – generating noise as they do so – cats will show greater caution. After dark, with the roads seemingly quiet, they may take a more cavalier approach to road safety.

Also, empty roads encourage faster-moving vehicles. The greater the speed of a collision, the likelier the cat is to experience serious injury. With less traffic and fewer red lights, drivers will be encouraged to pick up their pace, especially on long, straight roads.

Visibility can also be reduced for drivers at night. Even the most attentive driver can be taken by surprise if a cat chases a mouse into the road unexpectedly. If the car does not slow down or stop in time, tragedy may follow.

Prey is plentiful after dark. This will not go unnoticed by other cats in the neighborhood, whether domesticated or feral. Your cat will likely experience competition for a hunt, leading to conflict.

Competing for prey is just one reason why cats fight. Felines may also battle over territory or a mate. If your cat does meet a feral or stray opponent, it may be taken aback by how vicious such animals can be.

It’s not only other cats that you need to worry about. Many towns and cities are home to nocturnal wildlife that may attack a cat. Raccoons, foxes, and coyotes are active. Even owls can be considered a predator to domesticated felines.

If another animal attacks a cat, it may require immediate first aid. This will be impossible to provide if the cat cannot come home. Equally, an injured cat may retreat to an unknown hiding place to recuperate. This process may last several days, causing no end of worry to owners.

Another concern of leaving cats outside overnight is exposure to the elements. Unless your cat is genetically inclined to enjoy cold weather, it may find life difficult when the temperature plummets. Equally, felines loathe wet fur. Being caught in the rain will be a miserable experience for any cat.

Cats are smart and adaptable. Most cats will find some way to locate shelter. As long as this is not territory that has been previously claimed, cats can wait out the adverse weather conditions in peace.

Unfortunately, cats do not always choose the safest hiding places. Your cat may retreat to a neighbor’s shed or garage, for example. This could lead to the cat being unwittingly locked inside for a prolonged period.

Even more dangerous is the feline predilection to seek shelter under cars. An owner may not notice a cat in the morning upon starting their car. The risk of an impact injury in this instance is obvious.

Equally, the cat may get a body part, most commonly the tail, trapped. This can lead to breaks and fractures, or even degloving injuries. These can lead to permanent disfigurement in cats, as well as significant pain and distress.

An outdoor cat will behave the same at night as it would during the day. It will just enjoy itself more due to a lack of distractions. It’s a judgment call for owners as to whether this is desirable. If in doubt, keep your cat home after dark as it’s the safer option.