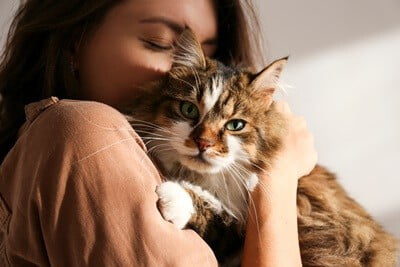 It’s a common misconception that cats aren’t affectionate animals and don’t like to cuddle. Even though cats enjoy their independence, they’re just as capable of showing love as other pets. Some cats sit on their owners’ laps for hours on end, refusing to jump down.

The friendliest and most loving cat breeds include:

Some cats become more huggable as they get older, but these breeds are more likely to be lap cats from a young age. Socialize your cat when you get it, and you’ll have a warm and loving life companion.

Not all cats are cuddly creatures, so why are some cats more affectionate than others?

Cats cuddle up to their owners to carry out behaviors they learned during kittenhood for these reasons:

Cats are at their most vulnerable when they sleep, so if you’ve built a bond with your cat, it’ll look to you for protection from predators and environmental dangers while it rests.

Similarly, the journal Current Biology explains how some cats can form attachment bonds with their owners and experience separation anxiety when they’re not around. In this case, cats enjoy being near their owners and feel more secure around them.

Also, cats cuddle up to their owners because they:

Not all cats like hugs, but some cats become more affectionate as they get older.

What Are the Most Affectionate Breeds of Cats?

While all cats have unique personalities due to their upbringing and life experience, some species are more naturally hardwired to cuddle up to humans than others.

The most affectionate cat breeds include:

Maine Coons are large cats native to the U.S. state of Maine. Despite their physical stature, they have a sweet, gentle nature and enjoy human company.

They’re inquisitive and love being outdoors, but they’re just as happy cuddling up to their owners on a cold, rainy day.

However, while Maine Coons like to cuddle, they prefer to do so on their terms. If you scoop your pet up without warning, it’ll attempt to wriggle out of your arms until it’s ready for a cuddle.

Maine Coons love being brushed, as they have long, thick coats that require regular grooming, so they’re more than happy to curl up on their owners’ laps while being brushed.

British Shorthairs are well-loved because they’re affectionate companion cats. They settle well into family life, even if you have small children.

However, they prefer sitting nearby to curling up on their laps. They like to know what their families are doing, so they remain nearby to watch what’s going on.

As well as bonding with the family, British Shorthair cats forge strong friendships with people who live alone. They make good companion cats for older people without family around them.

Birmans are some of the neediest cats. They love lounging around with their owners, cuddling up to them, and sitting in their owners’ arms.

They’re affectionate because they’ve been carefully bred over time to be friendly, loving pets.

Birmans don’t just show their affection toward humans, as they’re happy to cuddle up to other pets. Birmans can be territorial and like to get involved in everything their owners do.

The downside to their affectionate nature is that they become bored easily and crave human attention. They don’t do well living with owners who are away from home.

They’re happy in the company of other cats, so consider getting two cats at the same time so that you can socialize them to be comfortable around each other.

Cornish Rex cats are some of the sweetest pets around.

Their fur feels like crushed velvet, so owners often spend hours stroking and petting them. They have thin coats, so they enjoy snuggling on their owners’ laps and under blankets where they’re warm and cozy.

Not only are Cornish Rex cats affectionate animals that love being around people, but they enjoy being active, which is what makes them such fun to be around.

They require near-constant attention and can become naughty if they don’t get what they want.

Their affectionate nature means that they form strong bonds with people and reserve their attention for those they know.

They become strongly attached to one person, so the whole family must spend time with them to avoid being frozen out.

In comparison, Persian cats are aloof and reserved toward strangers, hiding away when new people visit their homes.

They follow their owners around the home, waiting for affection and attention. They like being picked up and cuddled and don’t object to being held like a baby. However, once they’re ready to get down, you’re better off giving your cat space.

Siamese cats are beautiful, intelligent pets that can be trained to perform simple tricks. As one of the most affectionate cats, they demand attention.

While many owners enjoy this, you mustn’t encourage your cat to be too demanding, or it’ll never leave you alone. Also, there’s a chance they could develop separation anxiety.

One of the cutest traits of Siamese cats is that they follow their owners around like shadows, so be careful that they don’t get under your feet. However, as much as they like cuddling, they also like their space.

They don’t always sit on their owners’ lap, but they remain close by. They’re not the biggest lap cats, but they’ll snuggle occasionally.

As long as you provide your Siamese love and affection, it will reward you with some back.

American Shorthair cats are physically affectionate and love cuddling with their owners. They’re a laidback breed, so they’re just as happy leaning up or sitting next to you. They jump up on laps, but they won’t pester you for attention.

American Shorthairs can also be left for hours on their own, as they’ll entertain themselves. Just provide them with toys and games to prevent them from becoming bored.

The main issue is that they can become one-person cats if everyone in the family doesn’t spend a reasonable amount of time with them.

Also, they’re fearful of strangers and are likely to hide under the bed when people come over. This is normal, so don’t force them to join in with the fun.

Russian Blues are one of the calmer cuddly cats. While they enjoy showing affection, they’re not clingy.

They’re shy at first, so it takes time and perseverance to get them to be comfortable in their new home. When they settle in, they become playful, loving pets.

While they’re happy around people they know well, they’re less willing to be around new people. They either become withdrawn or aggravated, displaying unwanted behaviors. Over time, these should fade, but they’re unlikely to be comfortable in the presence of strangers.

Russian Blues get on well with other pets, particularly if you get them at the same time.

The hairless Sphynx is one of the most unique cats. They get a lot of bad press because of their creepy appearance, but they’re one of the most gentle breeds. Because they only have a fine layer of downy fur, they’re cuddly cats that don’t shed.

They’re people-orientated cats, greeting their owners when they walk through the door. They crave attention when they’re awake, so you shouldn’t leave them alone for too long.

Despite having no fur, they’re four degrees warmer than other cats, so prepare to get warm once your Sphynx cat curls up on your lap.

Even though they’re naturally warm, Sphynxes are always looking for ways to keep toasty, hence why they like human laps. If you’re not around, provide blankets to keep them comfortable.

According to Scientific Reports, ragdolls are relaxed, loving, and friendly. They’re one of the most cuddly cat breeds and are known for their gentle, affectionate nature.

They get their name because they go limp and relaxed when picked up. They’re called “cat-dogs” by ragdoll fans because of their clingy behavior, seeking out affection.

Ragdolls are tolerant of being handled for a short while – if you’re lucky, your pet may even be happy being held like a baby.

Unlike most cat species, who were bred to catch mice and other rodents, ragdolls were explicitly bred to be companion cats. This is the main reason why they’ve become such cuddly cats.

Most ragdolls are indoor cats due to the theft risk, making them even more dependent on their owners.

Scottish Folds are gentle cats that form strong bonds with their owners over time.

They love fuzzy blankets and enjoy kneading into them, getting themselves cozy and comfortable by digging into the soft material.

However, they only become cuddly with humans they’re bonded with. It’s rare for them to sit on anyone’s lap, so it takes time and effort to socialize them first.

It’s best to begin this when your cat’s a kitten, but it’s still possible to encourage adult Scottish Folds to cuddle up to you. They find it hard to say no to treats, so try enticing your cat with its favorite foods. Also, they enjoy being gently brushed.

Similarly, Scottish Folds only cuddle up to owners when they feel comfortable. If your environment’s too loud or chaotic, they’re unlikely to settle down on your lap.

Tonkinese cats are cuddly for different reasons than the other breeds, as they love being the center of attention.

They’ll do anything to avoid being ignored, including curling up on their owners’ laps. They’re even happy to jump up on the laps of strangers if they think they’ll get attention.

Tonkinese are a mixture of Burmese and Siamese cat breeds, both of which are cuddly and affectionate. Tonkinese inherited these genes, but they’re much more playful.

They become frustrated if they’re left on their own all day, as they crave human companionship. They’re unlikely to stay on your lap all day, but they’ll cuddle up for an hour or so.

Abyssinians are affectionate but aren’t cuddly cats. How much your cat enjoys curling up with you depends on its personality.

Abyssinians decide when they want to be cuddly and don’t like their owners making this decision. If you pick your cat up and put it on your lap when it’s not in the mood, it’s likely to jump down immediately.

Abyssinians show their affection in different ways. They’re very people-oriented and like to entertain their owners with comical antics. Also, they enjoy following their families around, observing everything they do.

Burmese cats are easy-going and affectionate, making them lovely pets. Unlike other breeds, they enjoy busy households and are happy to cuddle up to their owners.

They’re quite relaxed about being transported to the vets in a carrier and don’t make a fuss when you put them inside one.

They enjoy interaction with their owners, whether playing or cuddling up to them. Although they’re relaxed cats, they become distressed and anxious when they’re left alone for too long.

Burmese cats are happy to spend time with friendly strangers, entering their homes for food and to cuddle up. So, y you might want to keep your Burmese as an indoor cat.

Chartreux cats are another snuggly cat breed, forming strong bonds with their owners.

They follow their owners wherever they go, getting under their feet and jumping on their laps as soon as they sit down.

This breed loves attention and usually gets along well with small children and other pets.

They need to be kept indoors, as they’re at risk of being stolen.

When choosing a cuddly cat breed, consider how much time you have to give it attention. Many cats on this list don’t cope well alone, even for short periods.