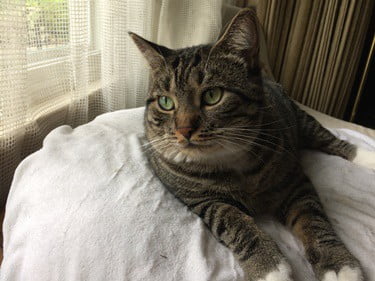 A worrying aspect of pet ownership is the prospect of someone stealing your cat. Unfortunately, this is common, especially when cats are allowed out at night. Thankfully, there are things you can do to recover your pet.

If you suspect someone’s stolen your cat, file a report with the police straight away. Afterward, put up fliers with your cat’s photo, register your cat as missing with local authorities, check with animal shelters and vets, and start posting your stolen cat’s face on social media. You’ll also need to conduct a local search in case thieves have discarded your cat onto the street. However, if you suspect theft, keep this information private, as the thieves are likely to be scared of prosecution, which will make it harder to get your cat back.

Retrieving a stolen cat isn’t easy. So, keeping your cat safe with theft prevention methods is a wise idea to avoid the heartache of having it taken from you. That said, steps can be taken to get your cat back.

Table of Contents show
1 Can Someone Steal My Cat?
1.1 Resale
1.2 Breeding
1.3 Monetary Reward
2 My Neighbor Stole My Cat
3 How To Get A Stolen Cat Back
3.1 Conduct A Local Search
3.2 Report To Police
3.3 Register The Cat As Missing
3.4 Posters
3.5 Social Media
3.6 Vets And Shelters
4 How To Prevent Cat Theft
4.1 Collars
4.2 Keep The Cat Indoors
4.3 Microchipping
4.4 Location Tracker
4.5 Neuter Or Spay
4.6 Cat Insurance
5 What Are The Most Commonly Stolen Cat Breeds?

Can Someone Steal My Cat?

A cat is legally classified as property and can be stolen.

According to a journal by Animals, 15% of pet cats go missing in the first five years of ownership, and some are never found. There are few laws in the U.S. regarding cat theft, meaning that it’s difficult to prosecute cat thieves.

Similarly, few police forces have the time and resources to dedicate to stolen cat recovery due to funding issues. That being said, the law specifies that police must take the issue seriously, so always file a complaint.

Thieves will steal cats for the following financial reasons:

Some cat breeds, especially pure-bred pedigrees, can fetch hundreds of dollars. After being stolen, thieves resell them to unsuspecting buyers for a quick profit. Kittens or young cats are more desirable and change hands quickly.

Many thieves remain undetected by moving the stolen cat across the country. When owners are seeking to buy a cat, they rarely ask enough questions about its history and get sucked in by the cat’s cuteness.

Potential owners must ask the right questions before purchasing a new pet. Enquire about its background and ensure all pedigree cats come with official documentation.

If the seller can’t provide you with this, don’t purchase the cat and alert authorities about any suspicious behavior.

Another lucrative way to make money from stolen cats is to breed them, which is more common with sought-after pedigree breeds, such as Persians, Bengals, and Ragdolls.

Unfortunately, most cat thieves operate a ruthless business, keeping the cats in cramped and dirty conditions. When they’re too old to breed, they’re left to fend for themselves or sold to a new family.

Owners should spay and neuter their animals so thieves can’t use them for breeding. Also, buyers should ask for information about the kitten to determine whether they’ve been responsibly bred.

Ask to see the parent cats before purchasing. If they appear to be sick or in bad condition, don’t buy the kitten and alert the local authorities.

Some thieves will wait until the owner offers a reward for the cat’s safe return.

The thief returns the cat, pretending to be a good Samaritan who found it. When the cat’s returned, the owner is usually too relieved to ask questions about where the cat has been.

Similarly, some thieves demand a ransom for the cat’s safe return, especially if they know where the cat lives. With the possibility that the cat will get hurt, most owners pay up without asking any questions.

My Neighbor Stole My Cat

Not all cat thefts are sinister or done for monetary reasons.

Some cats choose to live in other homes, especially if their new family feeds shelters them. The problem arises when neighbors keep the cat instead of returning it to its rightful owner.

Unfortunately, owners can’t go to their neighbor’s house and demand they give the cat back. Not only does this increase tensions, but it could make it harder for you to get your cat back legally.

Before reporting the theft to the police, find evidence that the cat is yours through:

Once you have sufficient proof, you can file a report with the police, who can assist you in getting your cat back.

How To Get A Stolen Cat Back

As soon as you determine that your cat’s stolen and not lost, you’ll need to act fast to get it back. To get your cat back, you’ll also need to know how to report a stolen cat.

The Journal Animals has stated that a physical search for a missing cat increases the likelihood of finding it. 75% of cats were also located within a 500-meter radius of the home after going missing.

If your cat has been stolen, it’s likely to be further away from home. However, conducting a local search around your home and local streets is the logical first step.

Similarly, letting the local community know that the cat’s missing encourages them to keep an eye out for your pet. If your cat has been discarded by the thief because it’s neutered or microchipped, it’ll try to make its way home.

As soon as you suspect that your cat’s been stolen, call the police to file a report.

If you have any evidence of the theft, provide it to the officers. This step is essential because it creates a record of the robbery, making it easier for you to retrieve your cat if you get a lead on who’s taken it at a later date.

Similarly, if someone finds a stolen cat, they’re more likely to go to the police than attempt to locate the cat’s owner.

Register The Cat As Missing

There are many different websites and organizations to register a missing cat. They will trigger alerts to everyone signed up in the local area, informing them of the lost cat along with a picture.

These sites also hold the owner’s contact details in case someone believes they’ve spotted the cat and need to pass the information on. Also, call your local animal control authority and rescue control centers, who will contact you if anyone reports your stolen cat to them.

Put up posters around the neighborhood and in local shops.

Add a recent photo of your cat and add as much information about it as you can about your cat’s appearance and personality to make everyone fully aware of what they’re looking for.

Don’t indicate that you think the cat was stolen, even if you have proof. The prospect of prosecution will deter thieves from coming forward and giving the cat back, even anonymously. Also, it puts the cat’s safety at risk.

Thieves sometimes take stolen cats across the state to avoid detection. However, creating awareness on Facebook, Twitter, Instagram, and other channels aim to prevent thieves from getting away unseen.

Similarly, join local Facebook groups to raise awareness within your community. If someone thinks they’ve seen your cat, they can send you a message straight away for you to investigate.

If your cat’s microchipped, vets and shelters that have picked up or had stolen cats handed to them will scan the cat for your details.

Unfortunately, if your cat isn’t chipped, they have no way of contacting you. As a result, you’ll need to check with local vets and animal shelters regularly to see if they have your cat.

At the time same, hand them a poster with your contact details and cat’s photo, allowing them to contact you if anyone hands in a lost cat.

Pet grooming salons are another good establishment to check in with. If a thief has second thoughts about the robbery, it may hand the cat to a place dealing with animals.

The shop owner can put a poster in their window, alerting local animal lovers of the missing cat.

How To Prevent Cat Theft

Getting a stolen cat back isn’t easy, so you should do everything you can to avoid this sad situation from unfolding.

Here are some of the things you can do to prevent cat theft:

Not all owners use cat collars because many cats dislike wearing them. While there’s a small risk of accidents with collars getting caught in a bush or tree, they’re an effective way of proving ownership.

If your cat gets lost and a kind samaritan finds it, the ID tag tells them where the cat lives. So, ensure you put your full contact details onto the tag, remembering to keep it up to date if you move home.

To make the collar completely safe, choose one with a quick-release feature. Also, a reflective collar makes your cat more visible in the dark.

Most cat thefts happen late at night under the cover of darkness. Keeping your cat indoors, even if it’s just at night, is one of the only ways to ensure your cat isn’t stolen.

This isn’t always possible for cats that are desperate to go out at night, so keeping them in from a young age means they can’t get used to being outside.

Uncontrolled access increases cats’ chances of getting permanently separated from their owners.

Expensive pedigree cats are more desirable to thieves, so they should remain indoor cats. If they enjoy being outside, a catio gives them access without the risk of them wandering off or getting stolen.

Many owners fail to get their pets microchipped, yet it’s almost impossible to find the stolen cat’s owner without an up-to-date microchip. Many end up in animal shelters where they’re euthanized after never being collected.

Microchipping makes it hard for thieves to resell the animal. If the new owner wants to update the address, a vet can notify the original owner, alerting them to the stolen cat’s whereabouts.

Also, microchipping makes it known to the thief that the cat is neutered.

If you let your cat go out at night, placing a location tracker on its collar can help you locate your cat’s whereabouts. You can even connect it to your phone, which gives you real-time tracking.

However, the thief will likely notice the tracker and remove it. That being said, it’ll provide the time and location it was taken, allowing you to retrace your cat’s steps more easily.

As mentioned, neutering or spaying your cat is one of the best things you can do to protect them from theft because it stops thieves from being able to breed them.

Also, it prevents cats in heat from going out to find a mate. As described by VCA Hospitals, tomcats appear in random yards looking for a female cat to mate with, leaving them vulnerable to theft.

While pet insurance doesn’t prevent the cat from being stolen, it can cover the cost of getting their pets back, including the cost of advertising your lost cat.

What Are The Most Commonly Stolen Cat Breeds?

Cat thieves are most likely to steal these breeds:

Most pedigree cats are OK as indoor cats, which is the only fail-safe way to prevent them from being stolen.

While it’s heartbreaking when a beloved pet cat is stolen, you must keep a clear head when trying to get your cat back. Thieves will be watching your every move, so don’t scare them off.

1 thought on “What Can I Do If Someone Has Stolen My Cat?”