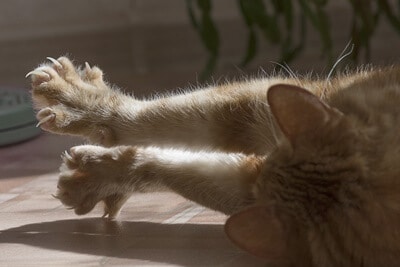 Feline claws are sharp, so they hurt when raked across the skin. Their claws can also cause damage to furniture, curtains, and carpets. If your cat doesn’t keep its claws retracted, you’ll need to train it to do so.

You can teach your cat to retract its claws through play. When approached with claws unsheathed, make a high-pitched yelping sound and stop the game immediately. This mimics the noise made by another cat, teaching it that claws hurt. This training will only work if your cat is willfully unsheathing its claws.

If your cat’s claws are always unsheathed, it may be thwarted by injury, disease, or infection. Cats usually learn to retract their claws into the paw at around 4 weeks old, but this doesn’t always happen. If so, you’ll need to take the necessary steps to teach your cat to keep its claws retracted.

Why Are Cats Claws Retractable?

A cat’s claws aren’t just long nails. Fingernails sit at the top of human digits, shielding the fingers and toes from damage, while claws are an extension of a cat’s bones.

As cats lack opposable thumbs, the claws are used to hold on to captured prey so that it’s unable to escape. When a cat is climbing a tree or fence, the claws provide the necessary grip to make it to the top.

Cats are digitigrade animals, meaning that they walk on their toes. This ensures that they can sneak up on prey undetected. If claws are left unsheathed, the tough keratin will create a click-clack sound on hard surfaces.

Consequently, cats prefer to retract their claws when not in use.

Do Cats Back Claws Retract?

As explained by the Journal of Morphology, the plantaris muscle is used for claw retraction.

The plantaris is a small but critical muscle located along the calf. By flexing the plantaris muscle, a cat can sheathe its claws. Cats can retract their back claws but rarely feel the need to do so.

Digitigrade animals walk on their front toes, and this means that cats’ back claws are ground down organically. Rear claws are also infrequently used as a means of protection from predatory animals and hunting prey.

Why Do Cats Retract Their Claws?

Along with teeth, claws are the main source of self-defense. As explained by Veterinary Clinics: Small Animal Practice, exposing the claws is a sign of fear in cats.

This is why cats sometimes lie on their back. This isn’t a request for a belly rub; it gives the cat easy access to all four claws. In this position, a cat can fight back when faced with danger.

If your cat is keeping its claws unsheathed constantly, it feels insecure.

When a cat pounces upon prey, it usually disables it with a bite to the neck. Claws are used to hold the prey steady until this can be achieved. The claws are also used to tear flesh from bone on rodents and birds.

Scratching with the claws is among the most common instinctive behaviors in felines.

As explained by the Canadian Journal of Zoology, this is a form of scent marking. Your cat is claiming these items/areas as its own by scratching your furniture and stair carpets.

The only way to control it is by giving your cat something else to scratch, such as a scratching post.

Cats enjoy climbing to high places as it provides a cat with an elevated vantage point. It can safely survey terrain from here, checking for potential threats and prey.

If your cat likes to sleep on a closet, it’ll have learned how to jump this high. Climbing a tree or fence requires more dexterity and scrambling. A cat’s claws, especially the dewclaws on the front paws, provide traction.

When Do Kittens Learn To Retract Claws?

Kittens keep their claws permanently unsheathed for the first 4 weeks of their life. This enables them to knead their mother’s teats and get milk. Once the kitten is a month old, it can retract its claws.

Most kittens will instinctively retract their claws. Cats of all ages understand the importance of protecting the front claws from damage. A kitten will take its lead from its mother or older cats.

Kittens learn about retracting their claws through play, and their mothers inform them when their claws should be unsheathed. If a kitten hurts a playmate, it’ll be chastised.

My Cat Doesn’t Know How to Retract Claws

Cats learn how to retract their claws during kittenhood.

It’s rare for a cat to make it to adulthood without this skill, but feral and semi-feral cats may have lacked key educational lessons early in life.

It’s more likely that your cat knows how to retract its claws. So, it’s either choosing not to do so or is physically incapable of doing so.

Here are the reasons why cats can’t retract their claws:

Your cat’s inability to retract its claws may be due to a fungal or bacterial infection.

This is most likely if your cat has torn a claw due to an impact injury or biting. Such injuries invite foreign bodies into the claw that make retraction painful.

The most common infections that prevent claw retraction are:

Leg/foot injuries can lead to an inability to retract claws. If your cat’s claws are permanently unsheathed, you may notice the cat is masking a limp.

The Journal of the Canadian Chiropractic Association stated that injuries to the plantaris are common. Your cat may have injured this tendon while running or jumping. Calf muscle injuries can also impact the plantaris.

As older cats are less active, they won’t wear down their claws naturally.

Senior cats lose the ability to retract claws due to a loss of flexibility. As the cat ages, its joints and muscles become increasingly stiff, affecting the plantaris.

A senior cat will find retracting the claws painful. Each time it flexes the plantaris, it experiences discomfort. It may be that the leg muscles will seize up, making it impossible to flex the plantaris and retract the claws.

Training a Cat to Retract Claws

The method of training a cat to retract claws depends on the cause. As mentioned, some cats are physically unable to retract their claws.

If your cat refuses to retract its claws, training can be given, but it’ll be a lengthy process if the cause is psychological.

Cat Not Retracting Claws During Play

Playing with toys stimulates a cat’s hunting instincts and provides exercise. If the cat grows excited during a game, it can unsheathe its claws.

Follow these steps to teach your cat to keep its claws retracted during playtime:

Your cat will quickly get the message: the unnecessary unsheathing of claws will bring fun to a rapid end.

Cat Not Retracting Claws Around Others

If your cat constantly unsheathes its claws around other animals and people, it feels insecure and afraid.

If other household pets are causing this reaction, consider a reintroduction. Keep them in separate locations, only allowing them to interact through a barrier. Feed both pets together, again separated, to forge a positive association.

Eventually, allow both pets to roam free again. If the reintroduction has been successful, the cat may retract its claws, suggesting that the two animals have learned to co-exist.

This concern can be magnified if strangers enter your house, including newborn babies. Cats are nervous by nature and are concerned about the intentions of these infiltrators.

Should I Declaw My Cat?

If your cat cannot or will not retract its claws, you may consider more drastic action. The act of declawing a cat is called an onychectomy; this is a controversial practice, which many vets will refuse to perform.

An onychectomy is not a manicure as feline claws are not nails. An onychectomy involves cutting off the tip of the cat’s toe bone. As cats are digitigrade, a declawed cat may struggle to balance while walking.

Instead of an onychectomy, consider fitting your cat with claw tips. These are plastic caps that sit on your cat’s claws, blunting the edges. Claw tips don’t prevent a cat from retracting claws in the future.

Cats that are more than 4 weeks old should be able to retract their claws. If you need to teach a cat to retract claws, show patience. It may be that your cat is physically incapable of doing so due to an injury or medical condition.