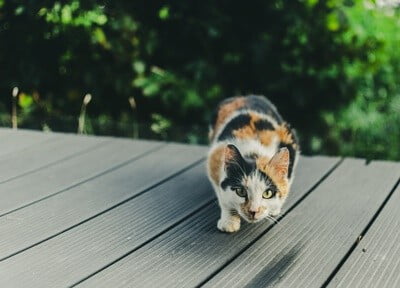 Silence is golden to cats. These stealthy, streamlined animals are born hunters, as well as being prey to other species. So, cats move quietly so that they can sneak up on prey and remain undetected by predators.

Stealthy walking involves minimizing the weight and pressure set on the ground. This is aided by keeping their bodies low and having only one paw up off the ground at a time (four beat gait). Cats walk on their toes rather than their heels (digitigrade locomotion) and use feline direct registering.

Feline direct registering describes how cats move their hind paws into the same spot that their front paws were in originally. This results in minimal contact with the ground and a smoother movement.

Table of Contents show
1 Why Are Cats So Stealthy?
2 How Do Cats Walk Silently?
3 How Do Cats Move?
3.1 Cat Walking Gait
3.2 Feline Direct Registering
3.3 Digitigrade
4 The Negatives of Cat Stealth
5 Why Do Cats Move In Slow Motion?

Why Are Cats So Stealthy?

Many pet cat breeds are all descents from a single wildcat: the felis silvestris lybica. This species is also known as the North African or Southwest Asian wildcat.

The wildcat originated in the Fertile Crescent in the Middle East and moved into Egypt much later on. From here, cats inherited many of the stealthy attributes that they hold today.

Pet cats were also theorized to be descendants of Chinese leopards, which boast a smooth, silent gait. However, there is no current evidence in our modern feline breeds that shows this connection.

There was a short period of time in which cats domesticated from leopards did exist. However, the breeds we know today all have traces of DNA from the felis silvestris lybica wildcat only. Therefore, modern domestic breeds aren’t descended from every wild cat, such as the lion or tiger.

The felis silvestris lybica, much like your domestic cat, is an adept hunter with a carnivorous diet. To sustain itself, it must be able to hunt and catch its prey. This, of course, goes hand in hand with stealthy walking. It’s an innate skill in the North African / Southwest Asian wildcat and our feline friends.

Therefore, this ability to walk quietly has been around for millennia and has evolved for good reasons. Our domesticated cats do not always need to hunt, especially since we are caring for them. However, it’s a skill that’s permanently a part of their DNA.

How Do Cats Walk Silently?

As for posture, many cats keep their body low to the ground. This enables them to control their body movements far more effectively.

Furthermore, cats sheath their claws into their paws so that their claws aren’t heard clicking against any solid flooring. This could give up their location.

How Do Cats Move?

Cats’ movement can be technical and complex. Fortunately, three main components explain how cats walk so quietly. These include:

Although these are considered three different components, feline direct registering is technically a part of a cat’s walking gait. Nonetheless, each of these components works together simultaneously, allowing a cat to be remarkably quiet as it walks.

A cat’s gait can be described in a matter of beats, which depends on the placement of its legs as it’s pacing around.

For many quadrupeds (or animals that walk on four feet, such as the domestic cat), this can range from a two to four beat gait. Felines have a four beat gait.

There are two factors to consider when describing four beat gait in cats. The first is how symmetric their legs move relative to each other.

According to the American Physiological Society, felines symmetrically move their legs. Their right and left legs mirror each other to some extent when moving around. In other words, their movement patterns on each side interchange with each other in a symmetric manner.

The second factor used to describe four beat gait is the “rhythm.” Here, cats place their paws on the ground relative to each other. This is where the “four beats” come from when describing feline gait. Cats have one paw lifted off the ground at a time, each at different timing.

It is quite difficult to observe in person. When watching a slowed-down recording of cats’ movement, you’ll notice that one paw is lifted up at a time. Since each of their four paws are moving up one at a time, this counts as “four beats” in their gait.

This four beat movement aids their stealth in a specific way. The step-by-step pacing rhythm, in addition to the symmetric movement of their legs, allows cats to flow smoothly as they walk.

This smooth movement aids their ability to perform stealthy and quiet movement.

Feline direct registering is used to describe a certain pattern observed in cats’ movement, which explains stealthy walking in cats. It’s also considered part of a cat’s gait since it describes its overall movement.

Feline direct registering is a method of walking in which cats land their back feet in the same spot where their front feet were placed previously. According to Brain Research, this contributes to stealthy walking in cats.

Feline direct registering allows domestic cats to limit the amount of weight that they apply to the ground. This type of movement also allows cats to have less contact with the ground.

This ensures that cats move about with a significantly decreased chance of being heard.

This is the same principle for cats. Much like feline direct registering, digitigrade locomotion decreases the pressure that cats apply to the ground. Less contact and less pressure placed on the ground means a lower likelihood of being detected while walking. That contributes to stealthy walking in cats.

The Negatives of Cat Stealth

Of course, being stealthy does have its pitfalls. In cats, feline direct registering takes a toll on the speed they recover energy from moving around.

According to Duke University, there’s a high metabolic cost in terms of stealthy walking in cats. It takes concentration and control. As such, moving as smoothly and quietly as our feline companions do has its disadvantages.

The researchers found that, on top of the amount of concentration, stealthy walking requires cats to move more slowly as well. This accounts for lower metabolic energy recovery in a shorter period of time, especially when compared to other four-legged animals, such as the domestic dog.

We can compare this to how we walk. When we are trying to move quietly, it requires a much higher amount of concentration and balance when compared to walking normally. You are usually far more tired and tense after tiptoeing around. That makes it clear that stealthy walking in cats is not energy efficient.

Why Do Cats Move In Slow Motion?

While it may seem that cats move in slow motion, that’s not the case. Instead, it’s simply a combination of the three main factors working together:

However, there are certain circumstances in which cats would move in slow motion. If you notice that your cat is extremely low to the ground and highly focused on something, then this is called “stalking.”

Stalking usually refers to a cat’s hunting behavior. Here, the cat slowly creeps up on its prey and wiggles before pouncing. Slow movement is, of course, necessary to capture prey successfully. In our domestic cats, this can also be seen as playful behavior. You will notice this slow-motion movement when playing with feather toys and laser pointers.

Stealthy walking is normal for our domestic felines. If you are a new owner, this may take some adjusting. Be careful where you walk, open doors, and move furniture. Your cat may be right next to you without realizing it.

Some new owners give their feline a collar with a bell to help them know where they are and hear them coming. If your cat tolerates this, feel free to use this aid until you adjust to how quietly cats move about the house.