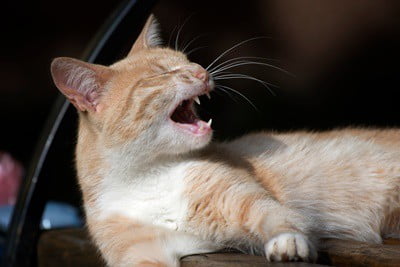 For seemingly no reason, senior cats develop odd behaviors, such as yowling at night. The constant crying, meowing, screaming, and howling can become disturbing, especially when you don’t understand why your cat’s upset.

The yowling of an older cat is a long cry due to pain, distress, or grief. It’s often the result of health conditions, such as hyperthyroidism, hypertension, sensory decline, or cognitive dysfunction. In particular, cats with dementia are likely to yowl during all hours of the night due to forgetfulness and confusion.

Of course, addressing the symptoms will usually calm down your cat. The conditions are often treatable or can be slowed down, but there’s no cure for degenerative conditions like feline dementia.

What Is Caterwauling In Cats?

Caterwauling is a persistent, melodramatic, melodic, and disturbing sound produced by cats in distress. Many owners describe it as a cross between a howl, yowl, and whine.

Given that cats are territorial animals, caterwauling is a way of protecting their space, so they may produce this sound to scare away intruders.

Caterwauling is most common in male cats, especially if they become aware that a female is in heat.

Why Is My Old Cat Crying At Night?

It’s common for old cats to cry at night. Of course, this won’t mean shedding tears but rather calling out and whining at all hours of the night.

These conditions affect the brain, manifesting in yowling and howling. According to the University of Edinburgh, elderly cats can develop a feline form of Alzheimer’s disease that causes them to yowl at night in distress.

It’s possible that your old cat has arthritis or dental disease and is crying due to the pain. In a worst-case scenario, an old cat crying at night means it might be time to say goodbye to your aging pet. A dying cat will develop strange behaviors, including persistently crying at night and becoming restless during its twilight days.

Reasons For Your Old Cat Howling At Night

While dementia and arthritis are the most common, other conditions include:

The condition is common among aging cats. According to the Journal of Feline Medicine and Surgery, about 10% of cats have this endocrine disorder.

An elderly cat with hyperthyroidism is likely to howl throughout the night due and display the following symptoms:

An old cat with hyperthyroidism is more likely to develop hypertension, but other explanations exist. Cats with high blood pressure tend to howl regularly.

Your cat will inevitably lose some of its senses as it grows older. They can begin howling and vocalizing persistently due to the confusion that sets in. Howling is a sign of distress due to declining sensory functions and abilities.

Some old cats develop arthritis and other degenerative conditions, which can be painful. If left untreated, your cat will begin to howl relentlessly throughout the day and night.

In particular, some cats develop a feline form of Alzheimer’s disease and dementia, and their cognitive function begins to degenerate as they age.

Your senior cat may start displaying repetitive behaviors like pacing the floor or forgetting to eat after approaching its bowl. This will culminate with the cat howling endlessly at night.

Your cat may develop neurological disorders, as well as brain and spinal cord tumors, as it ages.

The signs of central nervous system disorders in cats include:

Behavioral changes such as howling, yowling, and crying at night are common in cats with neurological and nervous system disorders.

Why Is My Old Cat Meowing Non-Stop?

Your old cat could be meowing non-stop because of several benign reasons, including:

However, the main reason why elderly cats tend to meow non-stop is health problems, including:

As cats grow older, they become more susceptible to diseases. The excess hormones released by the thyroid glands, or the confusion brought on by dementia, can make a cat uncomfortable, resulting in persistent vocalizations.

Why Is My Elderly Cat Yowling After Eating?

If your elderly cat is yowling after eating, it might be unwell. Health conditions such as hyperthyroidism, kidney disease, and uremic gastritis can cause:

Your cat will react to these symptoms by yowling.

Why Is My Old Cat Crying At Water Bowl?

Your old cat might be crying at the water bowl for the following reasons:

Why Is My Cat Displaying Odd Behavior?

Aside from yowling, your cat may seem to be acting strange overall. Whether it’s pacing back and forth, making sounds all night, or demanding all your attention constantly, it’s worth noting.

Here are the reasons and what you can do about them:

Your cat can display odd behaviors like howling or yowling due to underlying health problems, such as

Your cat may start to chew on non-food items such as socks, rubber bands, or plastic bags. If this is the case, it’s probably lacking essential minerals and vitamins.

Hormonal changes may cause your cat to behave strangely and start screaming. It is common for female cats to caterwaul when in heat and seeking a mate, and these noises alert male cats to respond to the mating call.

Cats may seem aloof, but they get very attached to their owners. Your cat may experience separation anxiety when you leave home for work or school.

Your cat could become anxious or apprehensive of the activities outside the house. For example, your cat might start howling or caterwauling to send a warning if it sees a neighbor’s cat approaching the house (its territory).

Cats are highly territorial animals, historically protective of their turf. If your old cat is howling or meowing at night, another cat has likely entered its space.

Your cat may also display odd behavior if it’s feeling vulnerable or insecure due to factors like:

Do Cats Yowl For Attention?

Cats require love and affection. They want to feel needed by you, and if you don’t give them enough attention, they will often become:

Your cat will yowl if it’s in distress and may require your attention to overcome whatever’s bothering it.

Why Do Cats Yowl For No Apparent Reason?

Cats don’t yowl for no reason, so every yowl, meow, or growl signifies that something’s wrong. Since cats cannot talk, their only way of communicating their pains and frustrations is through yowling or howling.

If you hear your cat yowling persistently, you shouldn’t ignore it. Instead, take time to find the cause.

Some cats yowl for food, so it’s important to provide enough food and water to avoid meowing at night.

Conditions like hyperthyroid can make your cat hungry most of the time due to a higher metabolic rate. If this is the case, you’ll find your cat yowling persistently until you give it a meal.

Do Cats Yowl When In Heat?

Caterwauling and yowling are common when female cats are in heat.

Females do this to contact any male cats within their vicinity. In return, male cats will yowl to heed the call, and the yowling will continue until the female gets a mate.

Do Cats Yowl When In Pain?

Strange behaviors like hissing, growling, and constant agitation could signify that your cat is in pain or injured. It’ll need urgent medical attention for relief.

Since cats can’t talk, they communicate through vocalizations and behaviors.

Do Cats Yowl When They Are Bored?

Cats have feelings, and they can sometimes become lonely or bored.

To release the negative energy, your cat might scratch your expensive furniture, pull out its fur, repeatedly lick itself, meow constantly, and indulge in other repetitive behaviors.

Why Do Cats Yowl After Pooping?

Your cat may yowl after pooping for two main reasons:

Why Do Cats Yowl Before Fighting?

Before fighting, cats naturally yowl as a way of intimidating other felines. It works as a show of strength, proving that the cat is stronger, more aggressive, and more dedicated to winning the conflict.

This is most common among male cats. The hissing and howling can discourage other cats from trying to enter the male’s chosen territory or taking food that it’s claimed.

For this reason, some cats yowl as a means of avoiding confrontation. Since fights can result in serious injuries, cats prefer to be intimidating than get involved in physical conflicts.

How To Stop Your Cat From Yowling At Night

Dealing with excessive yowling at night can be frustrating, especially if you don’t know how to go about it. However, there are steps you can take to enable your cat to settle down for the night.

Find Out The Cause of Yowling

A cat vocalizing at night might seem normal, but it points to a deeper issue.

Your cat could be yowling due to the following:

If there’s no medical issue causing your cat to yowl at night, it may be hungry or thirsty.

Some cats meow at night, hoping that you’ll wake up to feed them, especially if you lack a feeding schedule. Providing essentials like food and water will reduce nighttime calls.

Elderly cats may yowl due to the underlying conditions that come with aging. However, you can reduce the noise by ensuring that your senior cat is comfortable.

Start by keeping the cat’s bedding warm and draft-free. If your cat is losing its vision, install nightlights to enable it to navigate in the dark.

Cats are usually active during the night so, if your cat prefers the outdoors, keeping it inside will make it feel trapped. This will translate to nights of yowling. Consider installing a cat flap to allow your cat more freedom.

If none of the above measures work, and your cat is still yowling at night, they need to be assessed by a vet for issues such as cognitive dysfunction and hyperthyroidism.

1 thought on “Why is My Elderly Cat Yowling at Night: What Excessive Vocalization Means!”