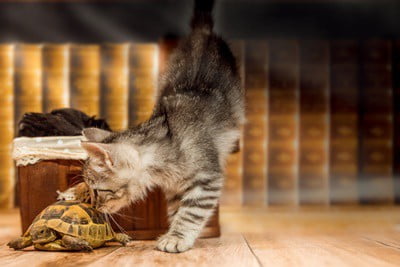 Cats have sharp hunting instincts and quick reflexes, even if they’re tame and well-behaved. They’ve been known to attack and eat birds, fish, rodents, and other pets that they see as prey. However, cats don’t hunt tortoises in the wild, leaving owners wondering if cats and tortoises will get along.

While cats don’t see tortoises as prey, never leave a cat and tortoise together when they don’t know each other. If the two pets grew up together or have had time to adjust to each other’s company, they’re likely to ignore each other. They should never be left alone together unsupervised.

To ensure that cats and tortoises live together peacefully, always supervise them, especially in the first few weeks. Be sure to cat-proof the enclosure so that the cat can’t antagonize the tortoise. Given time together, most cats will be largely disinterested in the presence of tortoises.

Table of Contents show
1 Are Tortoises Good With Cats?
2 Do Tortoises And Cats Get On?
3 Are Tortoises Safe Around Cats?
3.1 Can A Cat Kill A Tortoise?
4 Why Do Tortoises Chase Cats?
5 Keeping Cats And Tortoises
5.1 Supervise Both Animals
5.2 Cat Proof Your Tortoise Tank

Are Tortoises Good With Cats?

Unlike other mixed-animal pairs, tortoises and cats usually learn to accept each other. There are stories of cats and tortoises becoming friends, but this is more of an exception to the rule.

Upon first meeting, they’ll be largely indifferent to each other. Tortoises aren’t social creatures and rarely engage in fighting, except for territorial and mating reasons. Conflicts are most likely to occur between two male tortoises.

Your cat may be willing to compromise if the tortoise wants space, so you’re unlikely to get those persistent, unresolvable fights that regularly occur between a cat and a dog.

Your cat is more likely to pester the tortoise. However, since tortoises aren’t natural prey, your cat won’t usually react based on its hunting instincts.

This removes a cat’s urge to torment, bite, or exhaust a tortoise as it would a mouse, gerbil, or hamster.

Do Tortoises And Cats Get On?

Tortoises and cats have no reason to be instant friends, but they won’t be instant enemies either.

Their different smells, movements, and behaviors will result in curiosity as the two animals investigate and learn more about each other. Once they’re satisfied, they may live in harmony, either accepting the other creature’s presence or ignoring each other entirely.

Tortoises and cats make a good pair because they’re so different from each other, and the cat’s hunting instincts won’t automatically be engaged.

Consequently, your cat and tortoise can live safely under the same roof.

Are Tortoises Safe Around Cats?

Tortoises are usually safe around cats because they have ways to repel predators, most notably their carapace. This protective shell is made of keratin and is strong, able to withstand immense pressure.

According to Composites, tortoise shells have:

That’s comparable to aluminum alloy, which is often used to build planes, satellites, and skyscrapers. This means that your tortoise’s shell can comfortably withstand a cat’s teeth and claws.

Aside from their shells, tortoises can defend themselves by biting. The force of a tortoise’s bite depends on the species and its size.

If there’s any conflict, your cat will maneuver out of the tortoise’s range and pounce on its back. The tortoise will tuck itself inside its protective shell. Without any progress, the cat is likely to give up.

Natural defenses or not, a tortoise isn’t completely safe from a cat. Cats may still be able to scratch or bite an exposed part of the tortoise before it can retreat inside its shell.

Juvenile tortoises will be more vulnerable as they have softer shells than adults. A cat may damage the shell or inflict wounds on younger ones.

Can A Cat Kill A Tortoise?

A cat’s teeth and sharp claws can still inflict life-threatening damage to a tortoise’s head, legs, and shell.

The greatest risk is posed to smaller or younger tortoises as their shells may not be fully hardened, or their small bodies may endure more grievous wounds than larger or adult tortoises.

Likewise, a cat’s presence may stress a tortoise, leading to death. Constantly being prodded, chased, and antagonized can have serious health implications.

This can affect tortoises in the following ways:

Aside from a cat’s physical prowess, a litter box or company can expose tortoises to other dangers. Cotangents that don’t affect your cat may prove deadly for tortoises.

Why Do Tortoises Chase Cats?

Tortoises are usually the more docile of the two animals, but a territorial or aggressive tortoise can instigate aggression.

It’s common for tortoises to chase cats, which is usually due to hormonal aggression. Male tortoises will nip at females and butt against them with their shells during the breeding season.

Cats and tortoises can live together safely, but you need to take precautions.

Here are some pointers:

A cat and tortoise shouldn’t be left alone together, especially in the first few weeks.

Until the cat has adjusted to the pet tortoise, it may bother them incessantly. Even if the cat means no harm, this can stress out a tortoise.

Likewise, a tortoise is likely to ignore a cat but may act aggressively or with curiosity. To keep the tortoise from chasing your cat, stay within reach so that you can pick the tortoise up and reposition it.

You can’t monitor your pets constantly. For this reason, it’s important to give your tortoise a place where it can remain safe, far from your cat. Inevitably, cats will be intrigued by a tortoise’s enclosure.

To keep them out, you’ll need to cat-proof it by doing the following:

These measures will ensure the cat gives your tortoise some breathing space. Once cats and tortoises get to know each other, they’re likely to ignore each other and live happily in the same home. As long as you don’t leave them unsupervised, especially in the early weeks, you’re unlikely to encounter any issues.