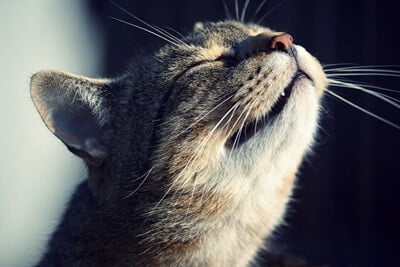 Of all cats’ senses, their sense of smell is arguably the most important. Cats rely upon scent to seek out and establish territory, determine whether food is edible, and detect potential threats and foes in the vicinity.

As cats get older, their sense of smell starts to decline along with eyesight and hearing. The cells within the nose of senior cats struggle to replicate at the same rate that they deteriorate. Older cats often have weaker immunity and experience more everyday ailments that negatively affect their senses.

If your cat loses its sense of smell over time, it’ll learn to adapt. You should assist your cat in adjusting by changing its many routines. Different scents can inspire feelings of calm or anxiety in cats.

Table of Contents show
1 How Well Do Cats Smell?
2 How Do Cats Smell Things?
3 Do Cats Lose Their Sense of Smell as They Get Older?
3.1 Illness
3.2 Nasal Blockages
3.3 Nasal Injuries
4 How Can I Tell if My Cat Can’t Smell?
4.1 Not Eating
4.1.1 Can Cats Lose Their Sense of Taste?
4.2 Relinquishing or Invading Territory
4.3 Lack of Interest in Hunting or Play
4.4 Tolerating an Unclean Litter Box
4.5 Skittishness and Aggression

How Well Do Cats Smell?

The feline sense of smell is amazing.

The nose of a domesticated cat contains around 200 million unique odor senses. This gives a cat a sense of smell that’s 14 times superior to a human.

This delicate sense of smell is essential to wild and domesticated cats. As explained by Applied Animal Behavior Science, aromas can explain many feline behaviors.

Dogs have more scent receptors than cats, but those of a cat are more refined.

A dog has a stronger nose, but a cat’s nose is more sensitive. Cats cannot smell 12 miles like a hunting dog, but they can distinguish between scents.

How Do Cats Smell Things?

With so many odor sensors inside their nostrils, cats can gain a detailed insight into something through its aroma. This is why cats often bury their faces in food bags. They’re taking in every possible scent.

Cats also smell through the roof of the mouth. They use the vomeronasal organ (also known as Jacobson’s organ). This is located at the top of the mouth and connects to the nose.

When a cat detects a unique scent in the air, it will open its mouth. This is to allow access to the vomeronasal organ. The cat will then flick its tongue and snap the mouth closed, often looking as though it is grimacing. This is known as the Flehmen response.

This is to move the pheromones detected into the air toward the vomeronasal organ. This organ then sends a message to the brain via the nose. The cat memorizes the scent, forging an association.

Do Cats Lose Their Sense of Smell as They Get Older?

As a cat ages, it will gradually lose its eyesight, hearing, and sense of smell.

The nose will deteriorate slower than the eyes and ears, and it will also remain comparatively sharp throughout life. A cat will never go entirely ‘nose blind’ purely through old age. The sense will diminish, though.

The cells inside a cat’s nose are constantly dying off and being replaced. As the cat ages, this regeneration becomes slower and harder. It will not stop entirely, but it will certainly tail off.

This could be a temporary issue or permanent. Beyond advancing years, there are three key explanations:

Head colds will typically have a blocked or streaming nose, affecting the sense of smell.

Felines cannot catch a common cold from humans. Instead, cats have species-specific upper respiratory infections. These include herpesvirus, calicivirus, chlamydia, and bordetella.

Despite their names, feline herpesvirus and chlamydia are not STIs and not transmittable to humans.

Symptoms of respiratory infection in your cat include:

Your cat will need to quarantine and rest for a week or two in most cases. Kept warm and allowed a quiet place to sleep, the cat will bounce back.

If the symptoms don’t improve after a week, your cat will need antibiotics.

If your cat has a respiratory infection, it may find its nose clogged with mucus. What’s equally possible is that your cat has a foreign object stuck in its nose. This will block any scent receptors.

Food is a possibility, though unlikely. Cats rarely waste the opportunity to eat, so unless your pet encounters a frozen pea, it will not be a perishable blockage. Look for small children’s toys, such as marbles or crayons.

Excavating a foreign object from a cat’s nose is best left to a vet. Remove something with tweezers if you can see the item and it seems willing to come. If not, don’t risk hurting your cat or getting scratched and bitten.

A cat’s nose may feel rough and leathery, but it can be delicate. Unfortunately, other cats know this. If your cat has been involved in an altercation with another feline, the nose was likely targeted.

Look closely at and inside your cat’s nose, ideally using a torch. Look out for any cuts or nicks. This could be leading to dried blood or internal bleeding within the nostrils, restricting the ability to smell.

Your cat may also have an impact injury on the nose. Running into a glass door is standard cat behavior. Felines often struggle to comprehend glass. The nose may be swollen due to this impact or, as above, bleeding internally.

Place ice on a potentially injured nose to aid any discomfort and run the hot taps in your bathroom. Place the cat inside once the room is steamy. There is no need to wash your cat. You’re just using the steam to open the airways and potentially resolve the problem.

How Can I Tell if My Cat Can’t Smell?

Perform the following experiments if you want to test your cat’s sense of scent:

There are five additional giveaways that a domestic cat’s sense of smell is gone. Learn what these are and look out for them, especially if your cat is getting older:

While a cat’s nose is significantly more complex than a human’s, its tongue is considerably more basic. As explained by the Journal of Anatomy, the average adult cat tongue has just 800 taste buds. Humans, for comparison, have 10,000.

This narrow palate means that cats take the first bite of their food with their nose. If a cat loses its appetite or refuses to eat, it can often be tempted with a strong scent. Drizzling gravy or tuna juice over food is often particularly effective. If still disinterested after these additions, it’s likely that the cat can’t smell food.

Will cats eat if they can’t smell? Felines use smell to determine if food is fresh or spoiled. If they cannot determine this, most cats will err on the side of caution and skip a meal.

Can Cats Lose Their Sense of Taste?

If your cat is not eating, you may wonder if it has lost its sense of taste. This is a possibility and can happen to cats, especially due to their limited taste buds. It’s likelier to occur alongside a loss of smell rather than instead of, though.

As with humans that suffer from a head cold, a cat living with a respiratory infection will have a restricted sense of taste. This pairs with the loss of appetite caused by an inability to smell – and the innate fussiness of felines when it comes to food.

In addition, a cat’s taste buds also decline as it ages. Watch how your cat reacts to food once it reaches an older age. If it shows less interest in a former favorite, switch the food for a senior-specialist version of the same brand. This will likely be more appealing.

If your cat takes a tentative bite of food then walks away, investigate other behaviors. If you are sure your cat does not have a respiratory infection, consider seeking professional advice. Your cat may have an issue that impacts taste or be experiencing dental pain.

Cats are always looking to claim part of a home or neighborhood for themselves. They do this is by a distinct scent behind them – assuming another cat has not already done so.

Once a cat has claimed territory, it guards it. If your cat is not watching over a corner of the home it claimed, it may be confused. A lack of sense of smell means the cat cannot recall which part of the home ‘belongs’ to it.

The same applies if a cat invades territory claimed by other felines. If it cannot smell the pheromones left behind by the occupant, your cat may wander into enemy terrain.

Lack of Interest in Hunting or Play

Scent is a major part of cat hunting behavior. If your cat is a mouser, it will constantly find its attention piqued by the aroma of prey animals. No mouse or small critter can escape the keen interest of a cat.

If your once-deadly killer is no longer looking to hunt, a lack of smell could be the reason. Ensure the cat is not depressed, injured, unwell, or simply too old to hunt any longer, though. Cats can cease stalking for a range of reasons.

Another test of cat smell is play. Some senior cats have long lost interest in toys and want to be left alone to sleep. Many hunting toys are filled with catnip, though. Unless your pet is immune to the charms of this herb, this should still encourage interaction.

Any lack of exercise in a cat is something to watch, but if your pet is particularly opposed to hunting and play, check its sense of smell. It may be that the necessary instincts are not being fired up.

Ordinarily, a cat will refuse to use soiled litter.

If you have not changed the litter in a tray since your cat last eliminated, it will likely seek you out and demand you do so. Alternatively, the cat may kick the litter out of the tray, urine, feces, etc.

A cat that has lost its sense of smell may not realize that litter is soiled. Alternatively, as per our discussion on territory, a cat may wander into another cat’s used litter box. This is especially likely in an older, confused feline.

The upshot of all this is that your cat will likely tread in waste. Such behavior is unhygienic for the cat and your home alike. Consider changing to a strongly scented litter to attempt to get a message to your cat’s nose.

Don’t be surprised if your cat becomes more anxious or aggressive while managing a declining sense of smell. Cats rely on scent to determine whether approaching humans or animals are a threat. Work around this by talking to your cat.

As per Animal Cognition, cats recognize owners by the timbre of their voices. Verbally announce your presence, and your cat is less likely to panic, run, scratch, or bite. Just remember, older cats are also often harder of hearing. Speak clearly without raising your voice enough to frighten your pet.

Other animals may still meet the sharp end of a cat’s claws if they get too close, though. Cats rely upon pheromones to communicate their mood in many cases. If these signals are not adhered to, fellow felines may assume the cat is willfully ignoring scent cues.

Thankfully, cats can still communicate through body language and purrs. If you have a dog in your home, it will not understand these messages. It’s advisable to keep the animals apart until the cat regains its confidence.

A cat with a limited sense of smell will need patience and support. Cats find a gradual reduction in the potency of scent as impactful as your or I would consider losing our eyesight. Your cat will adapt in time.