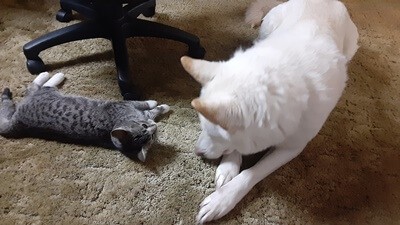 We often see videos of cats and dogs cuddled up together on the couch. It makes you wonder if cats and huskies are compatible or what’s required to make the relationship between these two much-loved pets work.

Huskies have a strong prey drive, so they’re likely to chase and behave aggressively toward cats. Consequently, keeping cats and huskies together in a multi-pet household can be challenging. Of course, each husky has a different personality, and training can mean that the introduction of cats and huskies can be made easier.

If you want to keep a cat and a husky in the same home, you’ll need to introduce them slowly and supervise them. However, if you don’t want to take any risks, choose a dog breed that’s more compatible with cats.

Table of Contents show
1 Is It Safe for Huskies To Live with Cats?
1.1 Keeping Huskies and Cats Together
1.1.1 Husky Breed: Characteristics And Personality
2 What Type of Cat will Get Along with a Husky?
2.1 Do Huskies Like Cats?
3 How To Introduce a Husky Puppy To A Cat
3.1 Swap Bedding
3.2 Introduction
3.3 Signs of Severe Anxiety
3.4 Signs of Aggression
3.5 Short and Regular Interactions
3.6 Removing the Leash
3.7 Escape Routes And Personal Space
3.8 Supervise Interactions
4 How to Introduce An Adult Husky To A Cat
4.1 Can You Introduce a Cat to a Resident Husky?
4.1.1 How To Get Your Husky And Cat To Get Along
5 Dogs Similar To Huskies That Are Compatible with Cats

Is It Safe for Huskies To Live with Cats?

Some owners have made this combination work, especially in cases where their cats have been sociable and confident.

Also, because huskies tend to be sociable and intelligent, having a cat companion may alleviate loneliness and boredom. Even the Blue Cross agrees that some husky dogs can live with cats.

But, if you’re thinking of keeping cats and huskies together, don’t do it on a whim. It takes planning and preparation to make this relationship work.

Keeping Huskies and Cats Together

Before introducing them, consider the following factors:

Siberian huskies with wolf-like features are endearing. In particular, their tendency to sing, howl, and chatter throughout the day.

Although beautiful, these dogs can be a handful. That’s why it’s important to fully understand the husky’s characteristics and personality before getting one.

Huskies have exploded in popularity, which has led many people to wonder if a cat can live with a husky.

What Type of Cat will Get Along with a Husky?

Some cats like dogs, especially those brought up around dogs as kittens. Also, cats that are confident and able to defend their territory should be OK around most dogs, as long as they’re introduced properly and supervised.

Siamese and Abyssinian breeds of cats are known for being sociable, confident, and adaptable. They may be more accommodating toward dogs. Also, a semi-feral mixed breed would be able to stand its ground around most canines.

If your cat is declawed, it shouldn’t be forced to live with a dog, as this will leave it feeling vulnerable. If your cat is timid and flighty, it won’t be a good fit for huskies because they have a strong chase drive.

If a cat doesn’t take well to living with a husky, it may move out or become ill due to stress. So, you must consider carefully whether a husky will be a good companion for a cat.

According to the RSPCA, husky dogs have very individual personalities. So, it’s difficult to predict whether a certain husky will love your cat, chase your cat, or ignore your cat completely.

Also, a husky’s attitude toward cats can change over time. There have been cases of husky dogs who’ve been friendly toward a cat for many years but have ended up killing it accidentally or on purpose.

It’s easier to shape behavior when an animal’s young. So, if you want to train a husky to like cats, you should expose it to cats as a puppy.

How To Introduce a Husky Puppy To A Cat

We’ll show you how to introduce a husky puppy to your cat:

For the first few days, keep the puppy and cat in separate rooms.

During this time, take some bedding from your cat’s and dog’s beds and swap them over. This will enable them to adjust to each other’s scents.

It’s time to start introducing your puppy to your cat but only do so after your puppy has had its vaccinations.

Ensure your cat is relaxed and the part of the house used for the introduction feels comfortable. Ideally, your cat should be positioned on a raised surface, like a countertop or cat tree, so that it can see the puppy clearly and feel in control of the situation. Also, ensure that there’s a clear escape route for your cat.

Bring your puppy in on a long leash, but don’t go straight up to your cat. Instead, wait and watch to see how their behavior unfolds.

In all likelihood, your cat will become scared and anxious. However, if your cat becomes extremely distressed, it’ll be kinder to end the interaction and try again later or the next day.

How can you know if your cat is a little stressed or severely distressed? The following would be cause for concern:

If you see these signs, terminate the interaction and ensure your cat is safely separated from your puppy. Also, if your cat starts grooming excessively or stops eating and drinking, it is a sign that the cat is distressed.

During the initial introductions, you should check for aggression in your husky pup and intervene.

If your pup displays any of the above behaviors, take it to another room. You can try re-introducing it later but only on the lead.

If signs of aggression don’t diminish during interaction sessions, you can try the distraction training method. However, some huskies will always remain aggressive toward cats, regardless of how much training they’re given.

If your pets start to become more relaxed in each other’s company, you can then allow them to spend more time together.

If safe to do so, let your puppy freely interact with your cat. However, you should only consider removing the leash if you’re confident that your husky pup isn’t aggressive toward your cat.

If you’re puppy’s interacting with a cat when off the leash, the cat must have a safe place to escape to. So, make sure that any exit routes are not blocked. Never shut a cat and dog in a room together, as this could end badly.

Provide your cat with at least one room that it can call its own. To do this, fix a baby gate on one room and remove one of the bars (or raise the entire gate slightly) so that your cat can get through, but your dog can’t.

Also, you may need to protect your neighbors’ cats. Huskies may learn to love their companion cat but chase after other cats in the neighborhood. So, if your dog uses the yard, you must install a fence that will be high enough to discourage cats from entering your yard.

How to Introduce An Adult Husky To A Cat

Introducing an adult husky to a cat is usually much harder than introducing a husky puppy to a cat. Even if the adult was brought up around other cats, it could be difficult to predict its behavior.

Nevertheless, some owners who have rescued adult huskies have integrated them safely into a household with cats.

This can be achieved with the ‘distraction method.’ This is considered more effective for training adult huskies to behave safely around cats, and it works by encouraging the dog to ignore the cat.

Here’s how it works:

If your adult husky approaches your cat but is gentle in its approach, it may not be necessary to continue with the distraction method. However, if there are any signs of aggression, you should continue.

If, after several attempts, your cat and dog don’t get along, it may be helpful to speak to an animal behaviorist. If that doesn’t work, having one of your pets adopted may be the kindest option.

Can You Introduce a Cat to a Resident Husky?

It’s harder to introduce a cat to a household that already has a husky. The cat will feel uncomfortable and will struggle to establish its territory.

It may be possible to introduce kittens to a household with husky dogs, but this would take a lot of care. Supervising the cat/dog and giving the cat at least one room will be necessary.

If your husky has attacked your cat, it goes without saying that you should seek veterinary care, even if there are no visible wounds. Also, this likely means that your cat and dog cannot live safely together.

How To Get Your Husky And Cat To Get Along

Huskies that are bored and under-stimulated are more likely to chase after cats. So, make sure your husky gets enough exercise during the day to feel tired. It’s a good idea to run or cycle with huskies to fulfill their desire to run and chase.

Huskies are sociable animals that require interaction, ideally with other dogs. Ironically, having two husky dogs rather than one will probably reduce the likelihood of attacks on cats. The dogs will be happier and more fulfilled if kept in pairs, so they are less likely to be aggressive.

Feeding your husky quality food may balance its mood and reduce its desire to chase after cats.

Dogs Similar To Huskies That Are Compatible with Cats

Huskies are gorgeous, and they have wonderful personalities. So, it’s no surprise they are popular pets. However, as mentioned, they are not very compatible with cats.

If you are drawn toward the husky breed but are concerned about their instinct to chase, why not consider one of these similar, more cat-friendly breeds instead?

All breeds of dogs can be dangerous to cats. That’s why it’s important to take the dog’s personality into account.