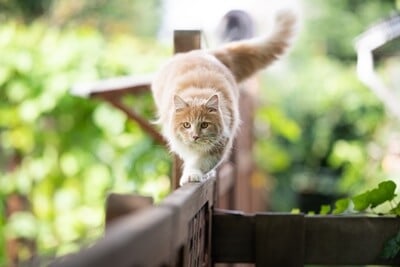 Cat whiskers (vibrissae) are one of the least understood parts of a feline’s anatomy. For a long time, people believed that whiskers were vital to a cat’s sense of balance. However, this couldn’t be further from the truth.

Cats don’t use their whiskers to balance themselves. Like most advanced mammals, cats derive their sense of balance from their inner ear, not their whiskers. When a cat loses its balance, the vestibular apparatus inside its ear sends the signal to the brain, prompting the cat to reorient itself.

While whiskers aren’t vital to a cat’s balance, they’re still important. They enable a cat to navigate in the dark, pick up air currents, and sense objects before they’re too close. Cats naturally lose some of their whiskers with age, play-fighting, and accidents, but they grow back easily.

Table of Contents show
1 What Are Cats’ Whiskers For?
1.1 Sensing Conditions in Their Surroundings
1.2 Gaining a Sense of Orientation
1.3 Locating Things in Their Environment
1.4 Communicating Mood and Feeling
2 Can Cats Balance Without Whiskers?
2.1 Stress
2.2 Rough Play
2.3 Injury
3 Can Cats Control Their Whiskers?
3.1 How Do Cats Get Their Balance?
4 Is It Okay to Trim a Cat’s Whiskers?

What Are Cats’ Whiskers For?

Cats have 12 whiskers on each side of their cheeks, arranged in rows of 4. Besides the prominent whiskers found on either cheek, cats also have these hair-like projections in the corners of their mouth, nose, and chin.

While the whiskers on cats may seem superficial to us beyond their aesthetic quality, they play a vital function as sensory organs for felines.

Each whisker on a cat’s face contains miniature receptors known as mechanoreceptors, which are sensitive to tactile information in a cat’s environment.

Cats use their whiskers in:

Sensing Conditions in Their Surroundings

One of the main functions of whiskers in cats is to pick up tactile information in their environment. Cats use their whiskers to detect objects in their surroundings so that they don’t bump into them.

However, instead of feeling the objects – like a human would do by stretching out their hand – cats use their whiskers to pick up changes in the air current. This helps them avoid possible threats to their eyes and face while also making it possible for them to move easily in dark conditions.

As such, long whiskers not only aid their night vision but their day vision as well. They allow cats to detect more than what their eyes alone can notice.

Gaining a Sense of Orientation

Some of the follicular cells inside cats’ whiskers have proprioceptive qualities that allow cats to find a sense of orientation. In other words, a cat will be able to tell its body orientation relative to the ground based on the way gravity pulls on its whiskers.

This enables cats to orient appropriately during falls such that they always land on their feet.

Locating Things in Their Environment

While cats have a strong sense of smell and good hearing, their vision is quite poor.

Cats tend to see better at longer distances but have difficulty focusing on objects that are close up. However, thanks to their whiskers, they can receive information about nearby objects in their environment.

Essentially, as a cat approaches an object in its path, it stirs up an air current that bounces back upon hitting the object. The air current is then picked up by the cat’s whiskers and relayed to the brain.

This radar-like quality is vital to the survival of felines in the wild. It alerts them of possible predators in their environment, as well as the location of their colony. Whiskers also help domestic cats find their food bowls in the dark.

You can tell a cat’s emotional state based on the positioning of its whiskers.

For instance, when a cat is happy or relaxed, its whiskers will be still and stretched out from the side of its face. Similarly, if the cat is curious or hunting, it will pull back its whiskers and ears.

Can Cats Balance Without Whiskers?

Whiskers don’t play any role in a cat’s ability to balance. This means a cat will still be able to balance even without any whiskers on its face.

Whiskers are crucial sensory organs that aid their spatial orientation and enable them to detect conditions and objects in their environment.  It’s not advisable to remove your cat’s whiskers.

It is worth noting that whiskers often come off on their own naturally. In most cases, a few broken or shed whiskers will not negatively affect your cat’s tactile sense.

However, there are some instances where the falling off of whiskers should be a cause of concern. These include:

Stress is a common cause of abnormal whisker breakages in cats. This can exacerbate your cat’s poor mental health, as it may struggle with disorientation and reduced tactile sensitivity.

Cats that play rough are prone to the premature loss of whiskers. This is especially prevalent in younger cats since they tend to be more active and full of energy. Most cats will lose their first whiskers at about 11 weeks old.

Abnormal loss of whiskers in cats is often the result of injuries to the area where they are located.

For instance, a traumatic blow to a cat’s cheek may cause the whiskers to fall off due to damage to the follicular cells in that part of the body.

Can Cats Control Their Whiskers?

Cat whiskers usually move independently and will position themselves differently based on the feline’s mood. You can tell how your cat is feeling by observing how its whiskers are positioned.

If your cat’s whiskers are in a neutral stance or slightly pulled to the side, this is an indication that it’s content or relaxed. Similarly, when the whiskers are pulled back, this may be a sign that your cat feels frightened or anxious.

How Do Cats Get Their Balance?

According to Consultations in Feline Internal Medicine., a cat’s sense of balance is derived from the vestibular apparatus in its inner ear. When a cat loses its balance, the vestibular system transmits warning signals to the feline’s brain, thus prompting it to reorient itself.

Is It Okay to Trim a Cat’s Whiskers?

Whiskers are made out of a fibrous protein called keratin, which is the same material that human hair and nails are made from.

Since they don’t contain any pain receptors, your cat won’t experience any pain if you decide to cut them off or when they break due to injuries.

However, cats rely on their whiskers to feel their way around objects, and trimming them may easily disorient your cat, increasing the risk of accidents and injuries.