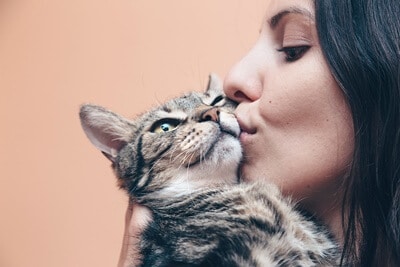 Cats can be so stand-offish that it’s difficult to know if they understand when we give them affection. If kissing your cat’s furry little head doesn’t get you the reaction you wanted, don’t be disappointed. Cats feel a lot of emotion, even if they don’t actively show it.

When a cat loves you, it’ll react positively to kisses, usually with purring, slow blinking, licking you, and leaning against you. If a cat reacts negatively, it doesn’t mean that it doesn’t feel love for you. It just means that it doesn’t want affection from you at that moment in time.

The idea that cats can feel love is much debated, even among feline owners. However, once you learn how cats communicate, you’ll understand why your cat reacts the way it does when receiving kisses.

Do Cats Feel Affection When You Kiss Them?

Cats are fully capable of feeling affection when you kiss them.

According to Current Biology, cats can form strong bonds with humans. Like babies and their parents, cats form different attachment styles, with more than half likely to form a secure attachment style.

Cats display affection differently than humans, but that doesn’t mean they don’t feel love. Though they may not understand what kisses are the same way we do, they appreciate being close to their owners.

According to Oregon State University, cats love being able to spend time with you. Cats with a secure attachment to their owners like receiving attention, so giving them kisses will make them happy.

Do Cats Understand We Love Them When We Kiss Them?

Contrary to popular belief, cats are fully capable of understanding that kisses are a loving gesture. Many think they don’t because of the way cats interact with each other.

Cats show affection toward each other in a different way than humans. However, we can take what we know about cats’ body language as proof that they know what’s happening when we kiss them.

When cats are friendly or affectionate toward other cats, they’ll:

As you can see, kissing isn’t part of a cat’s body language. This would lead you to believe that cats don’t understand what a kiss means. However, when we look at why cats show affection toward each other the way they do, we see evidence to the contrary.

Cats have scent glands all over their body, and they release pheromones from those scent glands to mark their territory on objects and people. However, they also use it to pass along information about themselves to other cats.

It’s not always a territorial behavior. When showing each other affection, cats will do things that allow them to rub their scents on each other because that’s how they communicate and let each other know they enjoy each other’s company.

When you kiss your cat, you’re basically doing the same thing. You press yourself against your cat’s forehead or cheek, which are where some of the glands are located.

In doing this, not only are you passing along your own scent, but you’re allowing the cat to rub its pheromones on you as well. In the feline world, this is how you show affection.

What Do Cats Think When We Kiss Them?

When you kiss your cat, what it thinks depends on its mood.

When in an affectionate mood, a cat will want to return the affection. Your cat can’t kiss you back because kissing isn’t something in a cat’s communication vocabulary.

You can tell that your cat is happy to be kissed through body language, such as:

When a cat does any of these things, you know you can keep the kisses coming. However, cats are fickle and can change their tune in a second.

You need to be able to tell when your cat wants to be left alone. Continuing to kiss the feline after it’s shown clear signs of wanting you to stop can annoy your cat and cause it to avoid you in the future.

Although cats are affectionate, there comes a point where they may want to be left alone.

When this happens, they’ll let you know by giving you certain signals, either with their bodies or through vocalization, such as:

When your cat displays any of the above signs, you must stop and move away. Not only will your cat possibly hurt you, but it could lead to your cat avoiding you later on.

Cats are creatures of habit who behave based on good and bad experiences. Getting kissed when they don’t want to be is a negative experience for the cat. Too many of those, and the cat will soon associate you with negative feelings, leading to a weakened bond between you and your cat.

Of course, if you’re your cat’s primary caregiver, it’ll take more than a few uncomfortable moments to sever the bond. Nonetheless, it’s still a good idea to oblige your cat when it’s sending you clear signals.

Cats don’t understand that we have a different communication style. So, when we ignore them when they try to communicate, it confuses and stresses them out.

Kissing your cat on the body is generally okay. Like most things, it depends on the cat.

Cats don’t have any scent glands on the sides of their body, so it’s not an area they commonly use to rub against things. They mainly use their head, and the rest of the body usually follows along, but only due to the headbutting.

Most cats love being kissed on the head. The head area is a safe zone where many cats like to be touched. With that said, all cats are different, so your cat may not like being kissed there. The only way to truly know is to test it out.

If your cat doesn’t like being kissed on the head, it could be because of how you kiss your cat. Loud smooching noises are likely to displease your cat.

Remember, cats have sensitive hearing, so loud noises close to that area will surely displease them. When kissing your cat on the head, be gentle and try not to make too much noise.

Cats dislike being kissed on the nose. It’s a sensitive area for them, but they also use their nose to communicate different things. A big part of cat communication is scent, and when they press their nose against something, they’re doing so to gather information.

So, when a cat has no desire to gather information from you, kissing it on the nose is rather rude. It’s an invasion of space that many cats don’t appreciate, so it’s best to kiss them elsewhere than risk getting them angry.

Cats carry diseases they can transfer to you through their saliva. Due to how important their sense of smell is, cats also press their noses against things that you don’t want to interact with, such as cat food, bugs, and their litter box.

Cats feel love when you kiss them, and some cats will kiss you on the lips. However, whether your cat appreciates the gesture every time is a matter of preference. Some cats will love kisses all the time, while others prefer it to be a rare gesture.