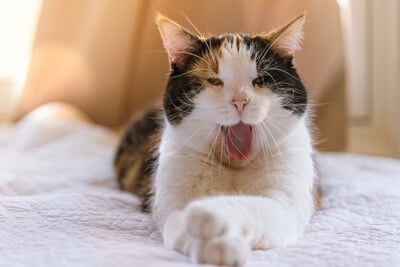 Yawning is a basic, involuntary behavior. Scientists have yet to discover the exact reason why cats yawn, despite how common it is. Some theories regarding why your cat yawns when it sees you are worthy of consideration.

A cat will yawn when it sees you because it feels content and comfortable. It’s your pet’s way of expressing that it feels completely relaxed in your presence. Yawning is a cat’s way of taking in more oxygen and awakening itself as it wants to reenergize in readiness to spend time with you. Of course, some cats are just sleepy.

Some experts theorize that cats yawn as a unique form of communication. It works as body language to catch your attention, short of an actual meow. In most situations, the occasional yawn means the cat is feeling relaxed.

Why Do Cats Yawn When They See You?

You may assume that your cat is just tired and winding down for the day. The yawning becomes more suspicious when it’s only directed at you. Perhaps your cat only seems to yawn when you walk into the room or come home from work. If the cat only yawns (or yawns more frequently) when it sees you, then it means the cat:

The first two reasons mean the cat values and cares about you. The last one means the feline is tired and requesting space. Determining which your feline means will depend on how it acts before, after, and during the yawn.

Cats are naturally vigilant creatures, staying alert to detect predators and prey alike. Anxious or disturbed cats will not yawn and certainly won’t attempt to sleep where you can easily find them.

Walking up to you and yawning is your cat’s way of informing you that it feels safe and secure. If you have been out all day and your cat has been awaiting your arrival, it will usually yawn once you come home. This shows that it’s content and ready for you to feed, pet, and play with it.

Such a yawn will often be accompanied by other feline behaviors that display contentment, such as:

Trying to Wake Back Up For You

A yawn is a cat’s way of regaining energy before it can be active. Cats start yawning and stretching the minute they rise from a nap. It helps to work out any kinks in their muscles and redirect oxygen to their brain.

Yawning excretes carbon dioxide from the body while taking in oxygen. Once oxygen reaches the brain, it helps sharpen the cat’s senses, wakes it up, and keeps it alert. As such, if a cat yawns when it sees you, it does so in order to remain attentive and awake.

This can mean that the feline was about to wind down and sleep but changed its mind. It wants to stay awake and play with you. It can also mean the cat was napping but now wants to wake up quickly so it can eat or enjoy petting.

By yawning, your cat is fighting its instinct to doze off to be in your company. That’s a high compliment from such an independent animal.

What if your cat yawns at you and then goes to sleep? Cats yawn when they’re tired but haven’t quite accepted that they’re ready to sleep yet. Since felines are experts at conserving energy (hence the term “cat nap”), this is significant.

The cat didn’t just go to sleep and ignore you, like instincts may have guided it to. It stayed awake and yawned when you came into the room.

Remember that cats have excellent hearing and detect sounds of 70 dB SPL from 48 Hz to 85 kHz. According to Hearing Research, that gives them some of the broadest hearing ranges of most mammals. Your cat will have no issue detected when you’re about to walk into a room. As such, it may have lifted its head, looked at you, and yawned as a way to make it clear it’s winding down to sleep.

No matter what, if the cat found you boring, it wouldn’t have bothered fending off sleep long enough to yawn at you.

Why Do Cats Yawn When You Look at Them?

Perhaps you’re sitting nearby, and your cat is acting normally. Then, you glance over, and it decides to yawn for no apparent reason. It doesn’t go to bed afterward, and it doesn’t try to play. In fact, it seems like a signal. In truth, it may be. The cat may have waited until you made eye contact because it wanted to tell you that it:

Some cats yawn for attention. This is especially true if they meow, hiss, growl, or make any other noise after yawning. Instead of indicating relaxation or sleepiness, the cat was stretching its jaw or performing a motion to catch your eye.

Sometimes, in older cats or kittens, creating a sound is more difficult. It may have begun to meow but didn’t quite achieve the sound.

Some owners theorize that cats yawn as a way to communicate as well. Cats rely primarily on body language as a way to convey intentions. In fact, as adults, they’re only known to meow at humans and not to each other. While no official research confirms or denies this, your cat may also be using basic body language to catch your attention.

If your cat yawns once or twice a day, even without being sleepy, that’s nothing to worry about. It’s not overly common behavior to try and catch your attention this way, but it does happen.

The problem comes if your cat frequently yawns throughout the day, at random moments, or multiple times in an hour. This may indicate that it’s feeling unwell or has an injury.

If your cat is unable to close its mouth, it may be experiencing dental pain. It may also open and close its mouth, stretching its jaw wide like a yawn because it’s trying to relieve the discomfort. Gum diseases and toothaches are common in cats. You should check for symptoms to confirm if this is the reason for unexplained yawning:

Dental pain cannot go away on its own. You need to take your cat for an evaluation, tooth cleaning, and perhaps dental surgery.

If the cat’s breathing is particularly shallow, it might be unable to gasp properly. As such, opening its mouth wide is mistaken for a yawn. Shortness of breath is a clear indicator that something is wrong.

If your cat is often yawning, monitor its breathing when it does. It may be attempting to take in more oxygen.

The average cat takes between 15 and 30 breaths per minute. If your cat has just exercised, it will breathe faster. However, the rate should be within this range as it winds down.

Hypercapnia is a medical condition where the carbon dioxide content in the body is high. By yawning often, your cat might be attempting to expel this carbon dioxide from its body so it can replace it with oxygen.

As a result, your cat’s blood flow might be impacted. Your cat may even start hyperventilating. Hypercapnia requires urgent treatment that may involve the use of an artificial ventilator.

Why Do Cats Yawn When You Pet Them?

As mentioned, cats yawn when they’re tired but not quite ready to doze off. If you’re currently stroking the cat at a gentle, leisurely pace, this will be very relaxing.

The cat will feel comfortable, cozy, and safe. All of that is a perfect recipe for going to sleep. The cat might yawn to try and stay awake. After all, when it’s alert, it can enjoy more of your petting.

Some cats will get up and reposition themselves to stay awake. Others will give in and drift off. No matter the case, this yawning means you’re treating your cat right, and it enjoys it.

Do Cats Yawn When They Are Happy?

If all of a cat’s needs are met, it’s comfortable in your home and feels safe, it will be more likely to yawn when you’re nearby. After all, an anxious cat would focus more on staying alert and avoid showing a weakness like fatigue.

Cat Meows and Yawns at the Same Time

If your cat meows while it is yawning, it is most likely just a vocal stretch or reflex. It’s attempting to work its throat, jaw, and vocal cords. This is nothing to worry about.

However, if you notice an excessive pattern, there might be an underlying medical problem. Watch if your cat displays odd symptoms alongside it, such as difficulty swallowing or foul breath.

Cat Yawns When I Yawn

Although rare, you may notice your cat yawns whenever you do. It’s said that yawning is contagious, especially among humans, because it’s a form of empathy. Even some animal species possess this trait. Are cats one of them?

Researchers at Hunter College studied a group of cats to see if links could be found between yawning and empathy. They concluded there were no significant links to be found. Sometimes cats mimicked their owners, and sometimes they didn’t. There didn’t appear to be a direct connection or any sign of it being caused by empathy.

Supposedly, this is because modern house cats are descended from more isolated ancestors that didn’t form large colonies. Without this socializing in their history, cats did not evolve to have many empathy-based reactions that other social creatures do.

If your feline yawns when you yawn, it’s likely a coincidence. Your cat may also be the strange outlier that has learned to mimic your actions, especially if you pet or feed it directly after this ‘trick.’

With that said, the above study is only one in a mostly under-researched topic. As science progresses, more findings could indicate that your cat does yawn precisely because you do.

Why Does My Cat Yawn So Much?

If your cat gets enough sleep and still manages to yawn all the time, it’s worth a closer look. Yawning excessively is a sign of mouth ailments in cats.

For example, feline stomatitis is a condition that causes excess inflammation in the mouth to the throat region. When cats experience excessive pain in this region, they sometimes yawn a lot to manage it. A cat with a mouth ailment may cry out and leap up each time it attempts to yawn. Cats with mouth problems may:

The occasional yawn is a good sign. It can imply happiness, excitement, and a sense of safety. You should feel pleased that it’s comfortable enough with you to reveal how fatigued it is feeling.