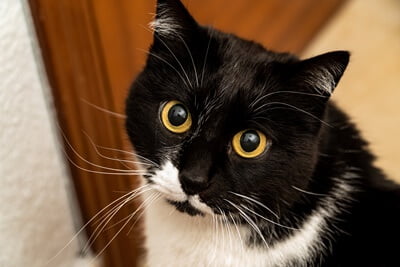 Cats’ eye colors vary significantly based on their breed. However, yellow eyes are one of the most common colors and, to some, the most alluring.

White cats can have a condition known as heterochromia, which gives them one yellow eye and one eye that’s a different color. There are likely other breeds that are naturally born with yellow eyes. With more than 100 breeds, this list serves as a starting point if you wish to find a cat with golden eyes.

Why Do Cats Have Yellow Eyes?

There needs to be a high amount of melanin to get yellow eyes in cats. Melanin is a pigment molecule produced by special cells called melanocytes.

However, cats don’t develop different eye colors the same way humans do. For instance, if a human has more melanocytes in its eyes, it’s producing more melanin.

As a result, the human will have a darker eye color, such as brown, compared to someone with fewer melanocytes. In the latter case, the person would have a blue or green eye color.

For felines, the more melanocyte cells a cat has in its eyes, the more melanin is produced, and the more yellow those eyes appear. This is why certain cats have yellow eyes rather than a different color.

Because the amount of melanin varies based on the individual cat, the range of yellow tones also varies. Some cats may have bright yellow eyes, while others may have more copper-yellow eye colors.

What Kind of Cat Has Yellow Eyes?

The following is a list of 10 different cat breeds with yellow eyes:

While this is not an extensive list, it’s certainly a good starting point for all the future yellow-eyed cat owners to look at. This list will be divided into sections based on fur color for ease of access.

Black cat breeds are one of the most common cats to have yellow eyes.

Some of these breeds include:

The Bombay cat comes in two different types: the American and the British Bombay.

Both breeds can develop yellow eyes and black fur coats. The British Bombay cat was crossed between various domestic breeds with Burmese cats, which is why we see green eye colors in some individuals.

However, yellow eyes are most common in black American shorthair cats. It’s unlikely that you’ll find a white American Shorthair with yellow eyes, as many are born with lighter eye colors, such as green.

Burmese cats also vary in fur and eye colors. However, golden-yellow is quite a common variety among members of this breed.

In a normal cat’s eye, excess aqueous fluid formed in the eye is drained, which helps maintain healthy pressure within the eye. Glaucoma forms when a lack of drainage disrupts healthy eye pressure.

According to Colorado State University Veterinary Teaching Hospital, since this cat breed is more susceptible to glaucoma, it’s also likely to develop metastatic iris melanosis. Iris melanosis is another disease caused by rapidly replicating melanocyte cells in the eye.

Remember, these are the cells responsible for melanin, which gives some Burmese cats yellow eye pigments. Since Burmese cats have more melanin in their eyes and are more vulnerable to glaucoma, developing iris melanosis is common.

Nonetheless, there are breeds where this combination exists, including:

The Manx is a special breed of cat, as it’s one of the only breeds that exist without a tail.

Despite this, some individuals do have yellow eyes. There are many Manx crosses with different patterns and eye colors, but there are grey Manx cats that exist with golden-yellow eye colors.

However, grey-furred Norwegian Forest cats with yellow eyes do exist.

Chartreux cats are almost all found exclusively with grey fur. In addition to this, they are also almost always found with yellow eyes. These yellow hues range from golden-yellow to copper to deep orange.

They’re often mistaken for certain British shorthair breeds. A few distinct features that a Chartreux has in comparison are narrower muzzles, with a mouth and skull structure that makes it look as if they are permanently smiling.

While it may seem a rare prize, white cat breeds can have yellow eyes. In fact, there are several breeds that, while difficult to find, are born with yellow eyes.

White cats with yellow eyes include:

La Perms have a special fur coat, being one of the most well-known breeds to have curly hair.

These cat breeds come in both short and long-haired fur types. La Perms are also found to have a huge range of coat colors, with white being one of them.

They can even have many different eye colors, including bright yellows and deeper, golden hues.

However, if you were to mate white Maine Coon cats with traits for yellow eyes, you can produce one with that eye color.

White cats of certain breeds can have heterochromia, resulting in one yellow eye.

While rare in many cats, Heterochromia is quite common in white-furred cats. This is because white cats already lack melanocytes as they are developing and, therefore, are prone to lacking melanin levels in their eyes. White cats can have a specific gene that blocks melanin from reaching their eyes, thus, resulting in heterochromia.

In many cases of complete heterochromia, white cats develop one blue eye and one yellow eye. This is because the blue color in cat eyes results from a lack of melanin production.

This is why we find so many white cats with blue eyes. All the melanin that a white cat with heterochromia has will concentrate in one eye, giving the other a yellow pigment.

Cats with heterochromia, either complete or partial, present special cases. Certain cats, especially those with white fur, can have yellow eyes.

Breeds that are susceptible to heterochromia include:

Some future cat owners may not be looking for a solid color cat and would far prefer a mix. If you’re looking for a black and white cat with yellow eyes, here are options that fulfill that description:

They’re one of many that are commonly found with yellow eyes. Their eye colors range from golden-yellow to deep copper and can be even as dark as orange.

British shorthairs can also be found with other colored eyes, but these types are often show cats. Such cats are very carefully bred to have these specific eye colors, compared to the natural yellow that many individuals have.

Turkish van cats also come in various colors, including black and white. However, their eye colors are not so variable.

In fact, Turkish van cats are unique in that they only have two eye colors: yellow or blue. When they have yellow eyes, they almost always have a golden amber hue to them compared to a bright yellow or darker copper.

Although they can be found with black and white fur coats, Turkish van cats are predominantly white or mostly white.